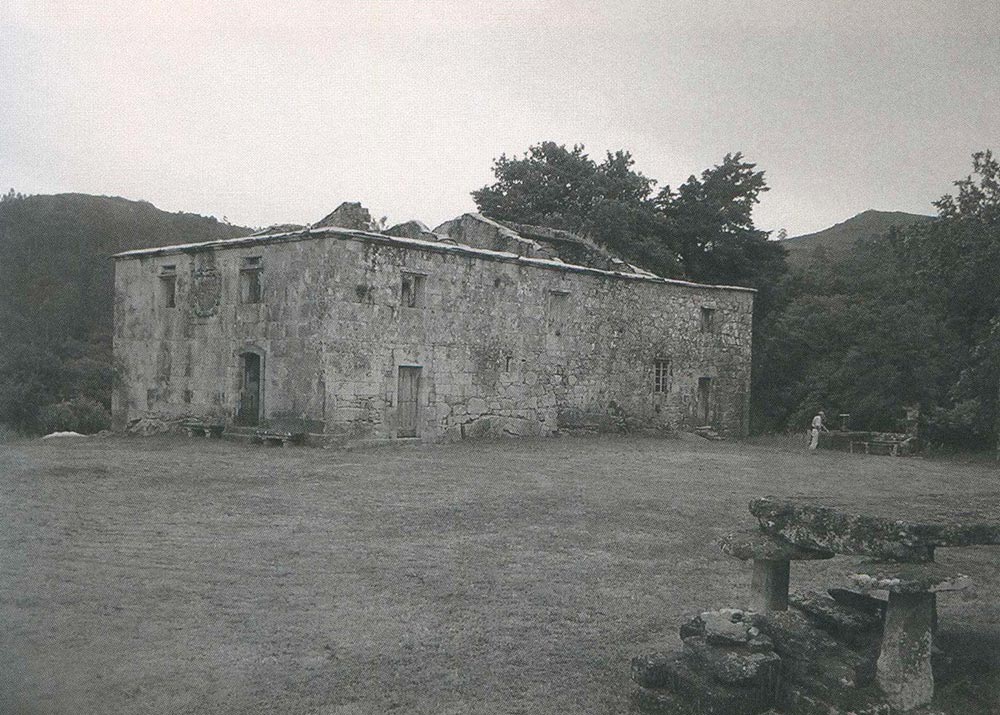 By our particular dictionary,

1. That one that shows again his constructive original nature, that is to say turns us to making notice after the action of the time or the man, how an organism is constructed.
2. Firmitas and maybe, venustas, without utilitas.

Providing that we approach a topic of reflection related to the ruin we cannot stop using like start the scene that represents the “Lesson of Anatomy of the Dr Nicolaes Tulp”, in this case to write a series of vague notes on Juan Navarro Baldeweg’s work in the ruin of Monteagudo’s country house in A Estrada, Pontevedra.

This Rembrandt’s magisterial painting, it shows the lesson that the Doctor Tulp gives to his seven companions of trade that accompanied of the indispensable presence of a last guest already without life, the inert figure of a corpse. In this scene the magisterial light deposited on each of the faces of the experts and companions of lesson of the Doctor Nicolaes seems to be equivalent, added with own his, to that of the already inert body, a light dialog balanced between the importance of the body without life, as area of attention, and the alive and attentive perspective of his contour.

This unsuccessful body, center of the composition, which serves as material of study, might make us think about the sure impotence of these doctors, not only for not being able to encourage a new life to his patient, but also for the frustration of not having managed to support it in her. Nevertheless and very unlike the awaited thing, in the attentive tension on the object without life, it is where our metaphor wants to be solved, us the optimism of a future being suggested still for coming, also capable of falling ill, but to which it is possible to answer with the acquired knowledge and the forecast of the experience from the precipice, the failure.

Of this corpse, so, it turns out to be a last hope that is that of the example, in the search and the study in the already lost thing, but with the intention of a possible future on other bodies still for saving or new models of work whom to inspire. 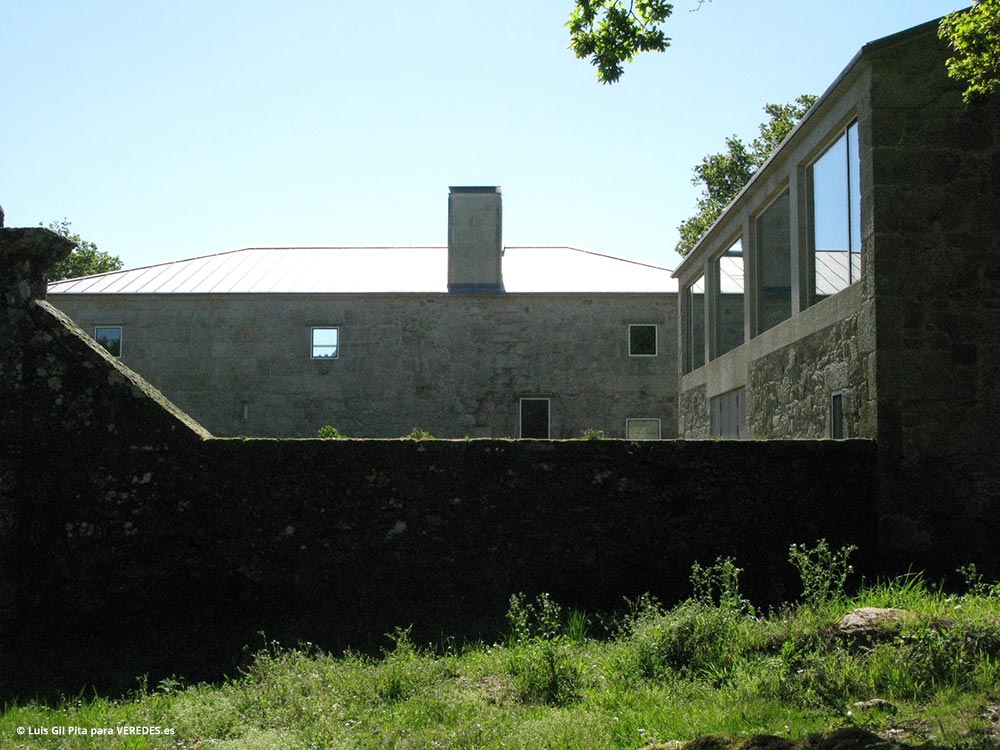 We knew, approximately ten years ago, the place, the original construction of the Country house and Monteagudo’s domain as ruin – in traditional sense it was an emptied building – during the accomplishment of a catalogue and architectural patrimonial inventory for the Consellería de Cultura de la Xunta de Galicia.

Later and since there was begun the project of Monteagudo’s rehabilitation we could follow his process of work, a time delayed in that also we were lucky to know personally his owners and persons involved in works of artistic reflection on the building and his environment. Both helped us bring over and understand Monteagudo of a way more wide than purely construction.

Today, with the already complete work, the process of architectural reading of the building is seemingly simple, if it is wanted, since it is a question of a rehabilitation without formal any pretense, something very slightly habitual in the rehabilitation of this typology of constructions. For us on the contrary, due to previous I contact the original ruin and his weight in the set of the landscape, this abstract simplicity that is recognized in the proposed exercise, it has been very difficult of interpreting on having approached with certain critical judgment the finished project.

In this time, which leads from the ruin to the finished work, some worrying questions have accompanied us, so much, that are the origin of these words, understanding the definition of worrying as the difficulty of apprehension of some of the senses that Juan Navarro Baldeweg’s project can consider or transmitting. We were assaulted especially by a doubt that turned out to be fundamental to free to approach the interior of the project. 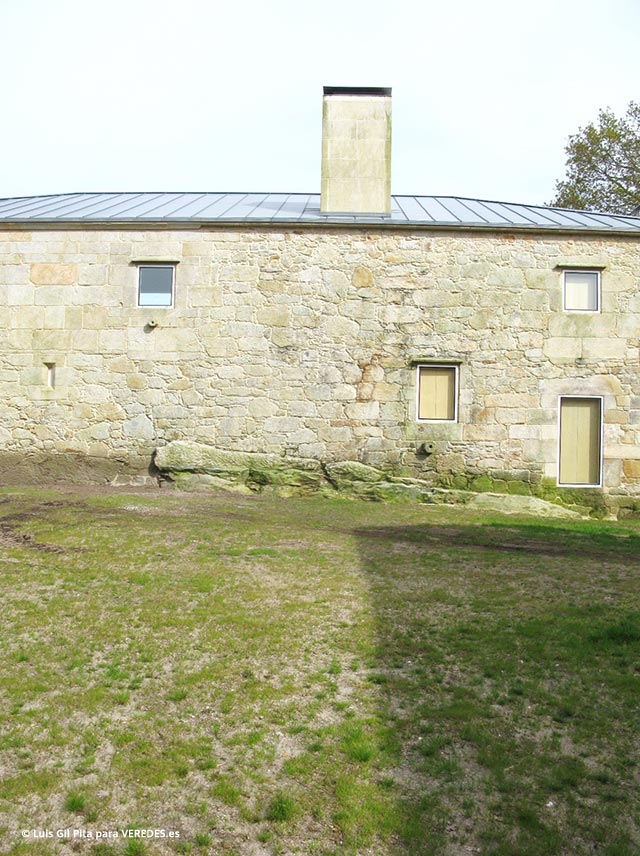 Why the offer of rehabilitation of this domestic construction was not pacega presenting cover? We want to say that he was not presenting cover in the sense in which the exposition of the project does not return to the building the original one of tile, being replaced this one with one of zinc that avoids the representation of a volume of term and the vision of a mass of auction superior to the cornice. It is to say there took place the substitution of the cover of traditional auction, for a “absent” cover so in the visual atmosphere of contour – between the fog and the constant water that great part of the year proposes the climatology of the region of Tabeirós-Terra of Mounts in which the house places – the zinc spends absolutely unnoticed, even more for the suppression of complementary elements of withdrawal of rain, canalones and bajantes, that they are accustomed to mark physically to pass geometrically of the water in the withdrawal and evacuation.

The disappearance of the cover, we were saying, it was worrying us, because the one who knew the set before the intervention, emptying and only with the walls of perimeter, and he was comparing it with the current complete work, it would not see between both conditions a substantial change in the visual relation with the domain and implantation in the surrounding landscape (a reading that gathers and analyzes also of precise form the work of the plastic artist Álvaro Negro in relation to another powerful presence – absence, that of the sculptures of the sculptor Ulrich Rükriem located in the park – forest that it surrounds to the house).

So the building seems to persist as ruin in the geography in spite of the fact that obviously it has filled with a new, succinct and contemporary program. The doubt is solving on having thought then that Juan Navarro Baldeweg’s offer is it of making remain the ruin in relation to his emplacement and not re-compose the original form, since the building across a new program and type of use will be different, his that he learns of the previous one but without rescuing it of a history that already does not exist. This it looks like to us the major lesson of the project, probably the most important and the bottom of this work, not to alter the ruin while there arms itself a new vital and architectural process. 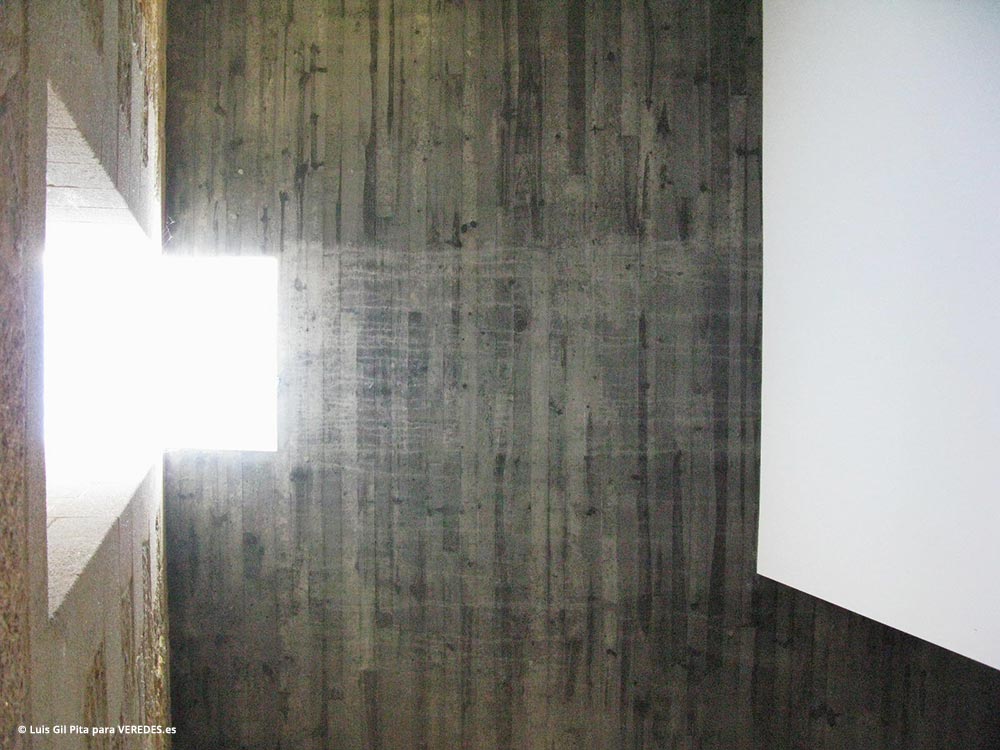 Calmed this principal worry, in an approximation towards the interior of the building, of the rest of the work it would not be necessary much any more that to indicate that it was not the humble technical response to a simple domestic program. Nevertheless, in spite of his calm interior breathing, the horizontal order of his structure in two plants sees tensed by the placement of a bubble gallery that arms the space of central vertical distribution of communications and also for the insertion of a nail of light -another architectural action of presence – absence, like the best Sinohara– that crosses and contradicts the horizontalidad of the structure of distribution of stays, crossing the section of both floors, from the bedrooms in the high plant up to the zone of the home or lareira in the fall.

We say absence – presence because while the load and constructive weight of these interventions are almost non-existent, the alteration of the espacialidad is deep, so much, that take pictorial tension to so simple arrangement of program. 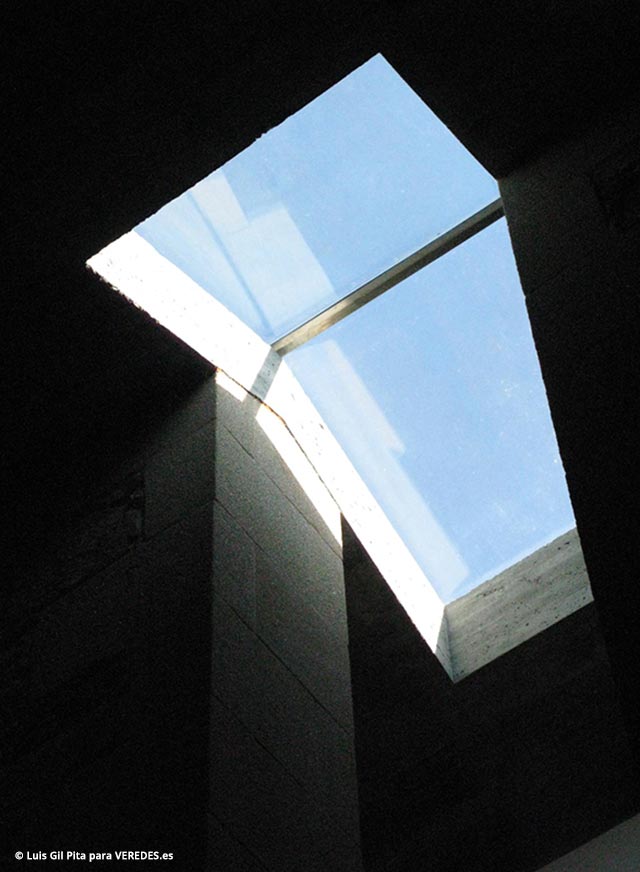 “the absence of cover”,

the levity introduced by the bubble and the nail of light, opposite to the weight and density of Rukriem’s sculptures in the domain of the estate that it wraps to the house. A sumatorio that makes alike to propose a compensation and balance between the weight and masses of the small cosmos of planets that compose Ulrich Rükriem‘s sculptures in the exterior and the interstices of light to the interior of the house that Juan Navarro proposes.

These doubts and worries that the approximation was raising initially to Juan Navarro’s work are solved so, looking at this body corpse, with the attitude with which the Dr Nicolaés Tulp and his pupils observe, learning of the ruin, of the disaster of the time and of the voidance of the life, with a look that should keep the melancholy and the nostalgia remote on the dead forms, to allow us to propose the hope to continue learning in the future of the failure accidentally to repair the already lost thing.