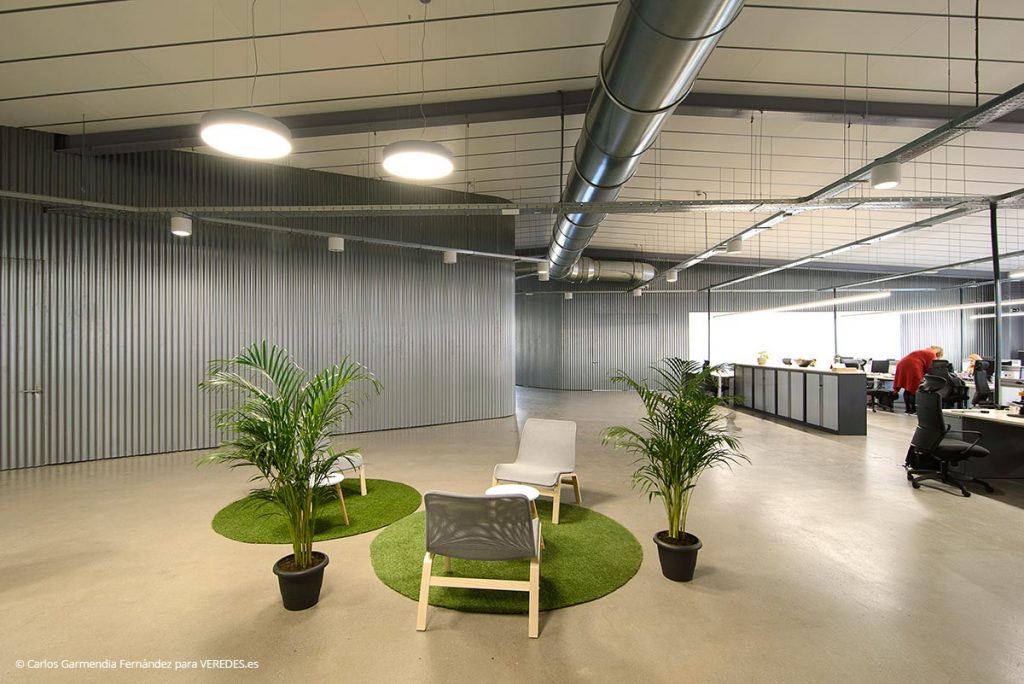 EBI is an installation engineering company specializing in electrical systems, air conditioning and telecommunications with which we had agreed on multiple occasions forming a team in different works. A company whose work methodology caused the need for a change of workspace. Thus, we are considering a new collaboration to carry out the design of its new offices within an industrial warehouse in the municipality of Etxebarri, annexed to Bilbao.

The relationship with our customers is always close and intense but, in this case, it also had a peculiarity, that client would be both a user of that new space and part of the team that would define and build it, thus working in common it ended up covering each part of the project in one way or another.

As initial proposals, EBI proposes two courses of action that become the backbone of the spatial design: on the one hand, it does not want offices or differentiation, there will be no fixed work places, limiting the closed spaces to meeting rooms of different types . On the other hand, when dedicating itself to the design and installation of facilities, the resulting offices had to function as a sample of their capacities, becoming these main protagonists of the design.

In addition to these two guidelines, the proposal should leave open the option of executing improvements in the future, building in this first phase the elements just necessary for the proper functioning of the company. So, we needed to solve the space in an economical and controlled way but reaching all the objectives set at the beginning. The available surface was divided in two halves: one destined to workshop and another to office, each of them with independent access but communicated to each other. In the office part, two large volumes were created through which all the spaces were defined, one of them houses a large multipurpose room (meetings, conferences, presentations, …) and a meeting room, the another hosts videoconferencing rooms, the bar area and the RACK room, framed as a welcome image to the visitor.

The morphology of these two volumes ends up solving the program in plan, delimiting the entrance, directing the user to the work zone and creating at the same time zones of different spatial characteristics which favors the functional diversity without physically dividing them.

In the same way, two other smaller volumes, both in terms of surface and height and with common uses to the workshop and office, act as linkages between the two spaces, splitting the dividing wall and thus remaining spaces of relationship between the two parties. of the team.

With regard to materiality, during the initial study of the project, we found ourselves with a serious acoustic problem: since it was a large space, needing open spaces and having a basic industrial construction, there was a serious problem in both the interior reverberation as with insulation towards the outside. In addition, it was decided to clean and maintain the existing flooring, so the comfort situation had to be achieved by means of the vertical walls as well as the false ceiling, where highly absorbent materials were used, ultimately covering the vertical walls with corrugated metal sheets and microperforated that, without interfering with the correct acoustic functioning of the whole, responded aesthetically and morphologically to the idea of the whole project.

Once again, it seeks to respond to the entire project in a direct and easy to read to get a resounding and hierarchical space using the minimum gestures and essential finishes, a space that, throughout its useful life, can grow at the same time that the company that works in him and with him does it.