María Arana (architect) and Gorka Rodríguez (Licentiate in Social Sciences and of the Communication and cultural producer) forms Zaramari, bought property study Bilbao. Zaramari is “a producer of ideas who works for the collaborative transformation of the urban environment from the creativity and the civil implication”.

The topics that they approach go from the urban pedagogy up to projects of communication and applied creativity, happening for the area of the consultancy, management and cultural production, and it is in this field where BAT arises. 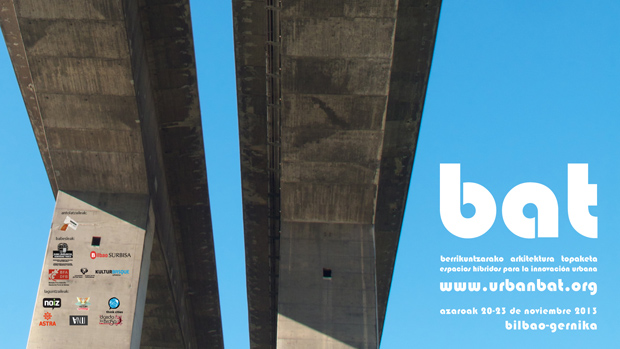 BAT is a cultural project that tries to explore the possibilities of multiple learnings that the city offers for the formation of a citizenship take part in the transformation of his environment. They treat each other about learnings based on the observation, the contact and the investigation of the urban reality, with the aim to propitiate reflections and initiatives that they contribute to the development of the most inhabitable cities.

Across the activities of his programming (workshops, you confer, debates, cinema – forum …) promotes an active participation and spaces of communication and creation that pass simultaneously in the physical environment and in the network, opening the possibility of putting in relation citizens, architects, town planners, designers, agents of the community development and urban activators to cross ideas and looks with the aim to look of joint form for tools and projects that try to contribute to the (re) construction of more inhabitable territories.

Some questions on which BAT is constructed:

“Of what form is it possible to contribute from the architecture to a more just and free company?

How do we can citizens, town planners and architects collaborate in the planning and (re) construction of spaces for the conviviality?

Can it be designed and the city be constructed by the logic of the shared creativity?

What paper can play the art in this type of processes?

How can we act from the hyperlocal thing in the urban development?”

On all these questions and many other questions BAT has treated. On the need to generate places where to think and to produce of collaborative and collective form to try to find alternatives, planning and (re) constructing spaces for the conviviality.

Which has you been your formation and professional path before BAT?

From the profession of the architecture we have been employed during more than 10 years at diverse studies of traditional architecture that were including projects from collective housing to the urban arrangement and urban development plans. From our other professions, we have realized programs of education in values across the cinema, the audio-visual production and the development of educational projects that were using the art and the culture as formative disciplines. Zaramari is born in 2009 with the interest of generating cultural projects that were using the creativity and the artistic practices as way to sensitize on the urban ecology from the social participation. There are three projects before the BAT that they were the beginning of a change in our work and that they show the interest on the participative and sustainable construction of the cities:

The first one was the ideación and the design of IMAGINATU BILBAO’s participation, a project of collective construction realized for Alhóndiga Bilbao. An invitation to all the visitors to the TRANSFORMACIONES exhibition to leaving his recollections, his ideas and his desires of city, so that these contributions constructed an emotional space in the room of exhibitions. An installation that was inviting you to be stopped to share the reading of the desires of the neighbors and neighbors, before continuing his way across a metropolis riddled with evocations of past, of experiences of present and of dreams of future.

Creactivos was a challenge raised by the agency of Busturialdea’s local development to favor processes of hybridization between different companies, institutions and organizations to promote projects of collaboration in the sector of the construction in the zone. Creactivos implemented dynamics of creative participation in the IREKUR Association (Association for the development of the responsible construction in bustutrialdea) that favored the collaborative work and facilitated the interconnection and sectorial knowledge.

To end Hondakin was BAT’S anteroom, a cultural program that comisariamos for AlhóndigaBilbao, where it was considering (re) to search between the rubbles of a model of urban development untenable growth to propose an exchange of experiences and looks that use the architectural practice as cultural instrument of investigation, experimentation, interaction and change.

What did you lead  to opening way you in a cultural project of these characteristics?

Our own interest to investigate and share the practices based on the creation shared between architects, designers, artists and persons been interested in the collaborative transformation of the cities. We are interested visibilizar and in promoting the emergency of new talents and creative practices that hibridan between the cultural production, the artistic representation, the architecture and the urbanism understood as tools for the (re) collaborative construction of the territory. We need to generate places where to think and to produce of collaborative and collective form to try to favor spaces for her the development of an urban emergent culture.

The current scene of crisis has left in the cities empty spaces, buildings to way to construct, extended infrastructures. We are in a moment in transformation in the relation between spaces and uses, between places and networks. Of transformation also in the form in which the resultant creativity of collaborative processes can affect in the way of doing public art in the city from the persons. In a moment that it makes possible to test cooperative methodologies that transfer knowledge or skills, simultaneously that share diverse ways of making and thinking about the place.

The contemporary city cannot already be understood without the technology and the digital practices that it generates. Neither the urban management, nor the cultural production/consumption can remain to the margin of these social changes. The digital platforms constitute spaces adapted to create and to share information and knowledge at the time that there are generated the relational necessary processes to mobilize this knowledge of a collective way across the social networks. An important element of this dynamics is his aptitude to generate learning processes. An inclusive process in which the urban creativity helps to improve the city lived by all the neighbors. An innovation that, in this case is based on the collaborative action and the use of the technology to generate social active networks that move actions that happen in the analogical space to the digital space and vice versa. A generation of hybrid spaces, points of meeting between the digital and royal planes of the city that can ensue from great usefulness to strengthen the processes of urban innovation. 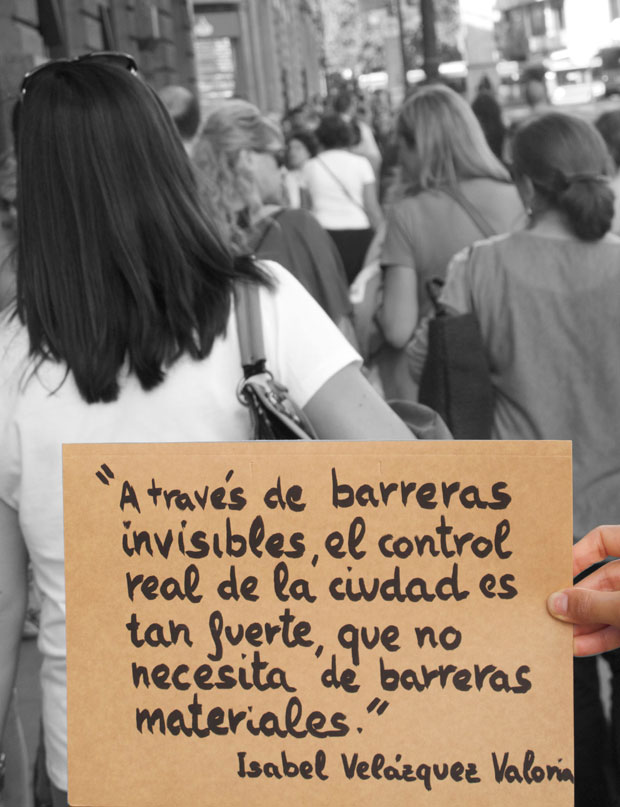 Did you meet many difficulties in his putting in march?

The major complexity of this type of programs is the process of search of institutional supports public and deprived to be able to carry out them. Little by little and due to an intense labor that we develop for many months, every time they are more the institutions that recognize the importance and the return of these type of cultural programs and they us move his intention of resting BAT. We take realized two editions and this type of programs are consolidated by the time. All those more editions let’s be able promote, we understand that easier we can obtain supports to carry out them.

Do you think that to study Architecture has been a fundamental passport to have come to your current work?

We admit that the architecture and the urbanism are two of our worries besides the profession of one of the members of zaramari. The interest to know the relations that can arise between the architecture, the city and other cultural disciplines the engine has been for us to develop our area of work.

To imagine the new scenes that the city offers for the culture across artistic interventions and cultural uses of the public space has promoted this interest to be employed at the cultural production that combines the creativity and the social space affecting in the joint between culture-company-territory.

Are you satisfied with the reached aims?

During the past two editions, the level of participation be been high. We have achieved that the University Publishes Basque him abuse the learnings that we generate in these meetings and offer university credits for the assistance. It forms a of recognizing the importance of these practices that from the not ruled education have his social and academic reconocimieto. The level of implication and return of the persons and associations that take part is fundamental for us and at the moment the experience been positive for all.

Would you encourage other architects to follow your steps? What steps do you consider that they should give? How to complete his studies? What other advices would you give them?

It would encourage the architects to think which is his area of interest inside the architectural practice and to investigating the service that they can offer from in what they are interested of the architecture. For us the important thing is to be able to turn our cultural interests related to the architecture and the cities into our profession.

Do you believe that the architects in Spain we should open new routes of work to go out of the “most “traditional” cabin of projecting given the current situation of the construction in our country?

In our opinion each one must do what more motivates him. For us it would be important to support the traditional part of the architecture, understood as a handcrafted and sensible exercise where the construction looks after itself and is responsible attending to the territorial, economic and social needs. For it not only it is necessary to restate our profession but many of the professions that orbital in the sector of the construction from several decades. We believe that it is a necessary (re) contruir the terrritorio from another sensibility and for it we see necessarily to look for new relations and routes of work contribute value to this new way of affecting in the territory that not only must be approached from the traditional practice.

What do you think of those that they have been going to work abroad?

We believe that many of the architects have emigrated for lack of a labor opportunity, leaving here the family and the friends. In many occasions I believe that it has been a very hard decision and of very much courage. On the other hand we understand that in other occasions, sacred the head and to go out was it can offer us the possibility of meeting other ways of doing that they can help us to find new professional opportunities inside the new urban trends that are recognized inside the social and civil innovation. About going out not always it is a drama. The interesting thing would be to share these experiences and knowledge acquired with the persons that we have remained here to favor an exchange of knowledge.

Interview realized by Ana Barreiro Blanco and Alberto Alonso Oro. To be grateful for Maria and Gorka his time and predisposition with this space.