Show apartment. Medellin and Barcelona, between soil and ceiling 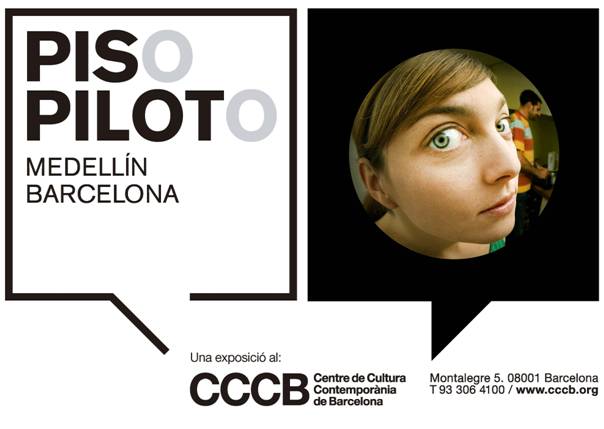 The Mayoralty of Medellin and the Town hall of Barcelona, together with the Museum of Antioch and the Center of Contemporary Culture of Barcelona (CCCB), present the exhibition Show apartment. Medellin – Barcelona, which shelter both cities during June to October, 2015, in an effort for stimulating the exchange of experience and knowledge.

The sample has as aim promote the debate and present a series of offers that help to give response to the problematic most important which both cities face concerning the topic of the housing and his relation the public space. A few offers that can be extrapolables to other cities of the world.

The CCCB and the Museum of Antioch turn into test bench to promote more sustainable and inclusive cities, where the right become effective to the housing and the right to the city.

The CCCB, as impeller of the European Prize for Urban Public Space, has a wide tour in the investigation on the construction of the city and, with Show apartment, wants to lead a debate concerning the topic of the housing, departing from the base of that the right to the housing is a topic of collective and not individual responsibility.

The structure of the exhibition, designed by a comisariado coral integrated by the architects Guillen Augé, Josep Bohigas, David Bravo, Alex Giménez, Anna Vergés and the healer of the Museum of Antioch Nydia Gutiérrez, is based on the sequence and exploration of three variables:

· The problem of the housing


Spaces of exhibition where the best answers appear to every topic on the part of the agents, persons or groups, which have been meant for approached the question of the housing from the fields academician, administrative officer, economically, artistically and of the activism.

· To reform, to live together, to cooperate

1.- THE PROBLEM OF THE HOUSING


With this first paragraph one tries to measure the different problematic ones and opportunities to confronting concerning the housing, by means of the selection of the information more developers that centre the reflection from different scales, comparing the situations of both cities protagonists, Barcelona and Medellin, with the international area.

The sample is opened by an audio-visual piece realized by Benet Roman who speaks about the similarities between both cities, of his long relation of cooperation and of his recognized path of transformation across a clear and brave bet for the public space; the piece ends up by raising the new challenges which they face from now.

17 challenges appear by means of an installation shaped by 17 doors. Every door exposes the information relative to the topic in question, both of Medellin and of Barcelona and, in some cases, also of other geographical areas. In each of the doors, there can be listened, in addition, key parts of the interviews realized to experts who think concerning some of the presented information. Between the exposed topics they emphasize ” empty Floors “, “Dispossessions” or ” Energetic poverty “.


This space groups the pilot offers elaborated by agents who have been meant for approaching the problem of the housing from very diverse, even opposite slopes. It is a question of equipments of academic investigation, of agencies of the Public Administration or of initiatives stimulated by the civil society, proceeding, in the main, of Medellin and of Barcelona, but also of other cities. His diverse solutions still are not hegemonic, but they have the value to have be put into practice and to prove his viability.

The exhibition of the CCCB possesses 44 experiences, 11 of which come from Medellin. Likewise, in the exhibition of Medellin, there appear 12 offers located in Barcelona and formulated by home teams.

There are great the equipments and the organizations that have intervened in 44 present projects in Show apartment. Medellin – Barcelona. Between them, Arquitectes de Capçalera, the Platform of Affected by the Mortgage (PAH), the cooperative Sostre Cívic and Khan Batlló, as well as Santiago Cirujeda, Teddy Cruz, Eric Bunge (New York), Eve Franch (New York) – director of the gallery Storefront for Art and Architecture – or Juan Herreros.

3.- TO REFORM, TO LIVE TOGETHER, TO COOPERATE


The space in that there is projected an audio-visual assembly that tries to synthesize the possible solutions concerning the problem of the housing that pivotan in the concepts of reform, cohabitation and cooperation. For it Beth Galí, Xavier Monteys has met to experts of diverse disciplines as Carme Trilla, Albert Sorolla, Germà Bel, Antón Costas, Gal · the Pin, Vanesa Valiño, Josep Parcerisa, Santiago Cirugeda, between great others.