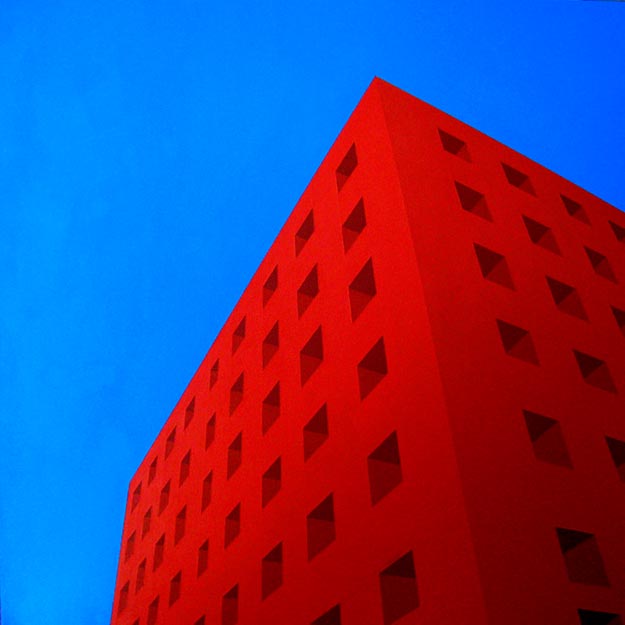 Contemporary architecture has often derived inspiration from the different forms and expressions of modern art, generally from abstract art. Many of the iconic buildings of modern architecture, which every architect holds in their mind’s eye, can be directly associated with works of art or artistic movements.

These architectural works, having undergone a process of purification and transposition, are like artistic ideas that have been beamed into the real world, at last sharing the same physical dimension as human life, something which only architecture among the arts can achieve.

With these buildings, abstract art, a way of interpreting and synthesizing the world, also materializes in that same reality, as if an idea, having passed through a process of transmutation, was returning to its original state. Spada‘s work constitutes a latter stage of this altered state, a new transmutation that repositions these buildings within the abstract world of two-dimensional painting on canvas. This passing from one state to another serves to purify form, eliminating all that is superfluous and enhancing the essential – through the suppression of shadow and extraneous elements, for example – and provides the real strength of these paintings.

Spada’s visual work is set within the geometric abstractionism of the early twentieth century that emerged in response to the excessive subjectivism of plastic artists of previous periods and looked to distance itself from the majority of movements that sought to represent a purely emotional three-dimensional reality. Taking his cue from the critical discourse of pioneering abstract artists like Picasso, Malevich or Mondrian, alongside the purism of Le Corbusier or Ozenfant, Spada goes a step further into what might be termed “neopurism”.

His desire to disappear as author leads him to using flat colors that it applies so that they can seem to be realized with mechanical processes: the straight and clear lines, which would say to themselves planned for computer, the square format of the linens – neither oblong nor vertical-, the meticulousness without virtuosity, do not leave place to the subjectivity of the artist who, for “not  appearing”, does not even sign his fabrics of a conventional way, limiting itself to stamping in the back an almost notarial mold with a few informative information.

Spada’s pictorial work does not offer to be analyzed, so, according to artistic conventional parameters and in this there resides one of his principal characteristics. His technology, for example, disdains any academicismo, and is, since he itself defines it, rather that of a painter of “fat brush” that anyone can use with a bit of practical sense.

So much to level compositivo as thematic, capture given known works, the majority of architects of renown, as Aldo Rossi, Alvaro Siza or Luis Barragán, in order that the spectator, whose visual memory can recognize them easily, meets induced, deceitfully, to perceiving something more than the simple abstract spots of flat colors and without texture that the painter has represented actually.