The exceeded domain. The conflict between the prexistencia and the extended program.

We belong, already almost all without exception, to the western culture of the excess, a behavior that Guy Debord and the situacionistas advanced and denounced at the beginning of them 60s of the SXX. A company of consumption that filled our houses of unnecessary objects that nevertheless transformed the programs doing that the project of to live servant had to deal with this problem from then.

A problem, that of the accumulation, in the first instance of material nature and later ecological ecological, that almost at the same time as it was arising was denounced not only by the sociologists if not also detected and used in his offers for the architects of the second generation of the modernity like the Team X very specially expressed in critical offers as those of the Smithsons with the house ” Everything in his Site ” or of reaccommodation of the sense of Aldo van Eyck’s extension with the extension and reform of the house Martin Visser, Rietveld’s original project.

The problem of the excess as oversized of the original program of a building, nevertheless, is not strictly a contemporary topic, in relation to the company of the consumption, but it is overlapped by one of the fundamental topics of the architecture, the passage of time and the sobreposición of new uses and programs on previous figures and prexistencias. The conviviality between the preexistence and the new needs, far from what normally the history tells us, not always is done by the force, with a hard and annihilating sobreposición of the original model, but with the spontaneity and immediacy of the necessary thing, as the vernacular architecture does.

It is more, the work counterfoil to which there join the transformations and / or overlappings, which it answers positively to the beginning of the discipline established by the architect in his construction, will be kept along the history without identity loses if, as Rafael Moneo says, this beginning turns out to be sufficiently solid to be able to absorb transformations, changes, distortions, etc without this one (the original building) after-taste of being fundamentally the one that was, respecting, in a word, what they were his origins.

*Part of the present text Maria Martínez Otero used as introduction to the chat on the recent work of Luis Gil Pita and Cristina Nieto Peñamaría in the days “Architecture and Belonging” of the Foundation together with Manuel Gallego, Carlos Puente y Vari Caramés organized by RVR architects in July, 2012. 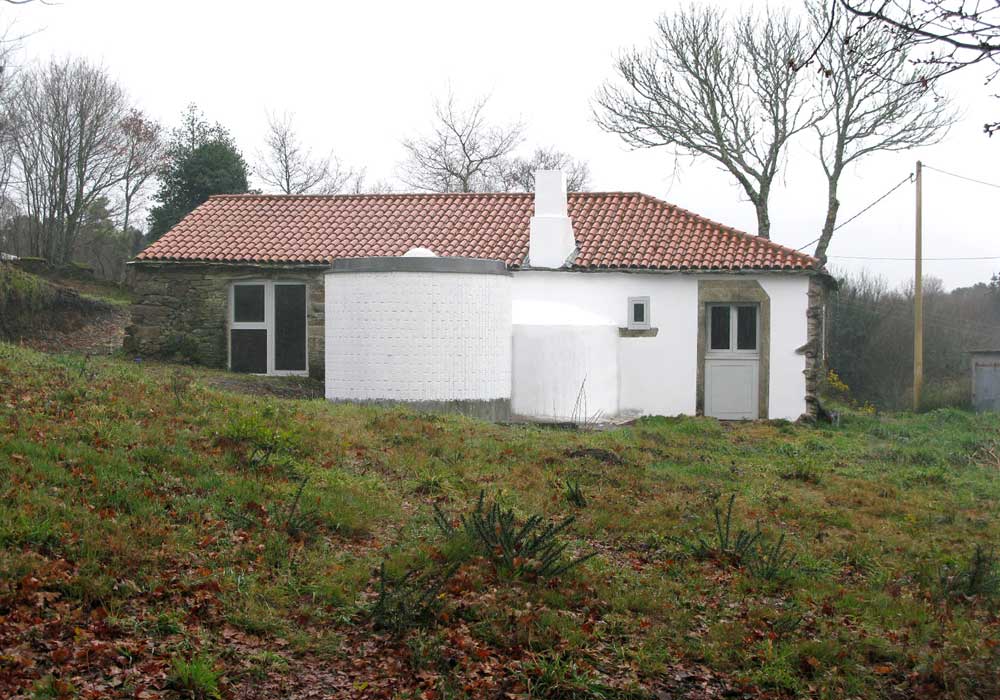 A vernacular domestic construction of very scanty entity that one must adapt to the regulation and needs of use contemporary. A construction ruined of ground floor of approximate exterior dimensions 10mX 6 m divided by a dividing structural wall in two interior areas of the approximate some 25 m2 useful each one and also a former oven of bread of interior use that is projected towards the exterior as a small globe. The rehabilitation should turn into a small housing.

The offer of arrangement happens for the dedication of each one of the interior spaces, to kitchen-dining room on the one hand and for other one, to bedroom, as a simple refuge, which in nothing must alter, for regulation of protection, the section or original traditional archetype. Nevertheless the current hygienic requirements and of program they demand the presence of a bathroom, which in case of be internalizing in the original plant of the building they would spoil the spatial cleanliness of both zones previously described and his acompasamiento with the structure dresses to the interior of the cover.

Hereby this part of the new program, the bath, is expelled towards the exterior of the plant in a growth in bubble that is made compose in a dialogue by the rounded exterior projection of the former oven of bread. In this dialog between the form of the pieces, externalized, projected on the outside, the new entry is located displacing also the problem of the in between of the access out of the original places of the plant. A weighed and re-drawn dialog, mentally and for the project, revising vernacular architectures of other latitudes and times.

From the construction, no doubt for the proximity in the utilization of the traditional systems on the basis of the trade of the wood for the structure of forged of ceiling and of ended in wall and soil, in the original container (with cover in traditional tile), and for the figure and part of the new program projected towards the exterior walls of expensive load of brick dress with cover of zinc also on structure of wood and ended of wall equally in lining pine identical fir.

The fact that the part of the program projected towards the exterior finishes off in a cover of earring zero in zinc, opposite to the traditional cover of three waters, he proposes with the clear and simple intention of separating in the time, the finished construction and the form of the mechanisms tied to a few new needs opposite to the preexisting systems.

Selected for the Prizes Enor 2014