Rafael Moneo. A theoretical reflection from the profession. Materials of file (1961-2013)

The Foundation Barrié presents his new cultural and educational project: Rafael Moneo. A theoretical reflection from the profession. Materials of file (1961-2013), the first great retrospective of the architect. The exhibition, curator for Francisco González de Canales of the Architectural Association of London, is an own production of the Foundation Barrié, organized in collaboration with Rafael Moneo’s study. 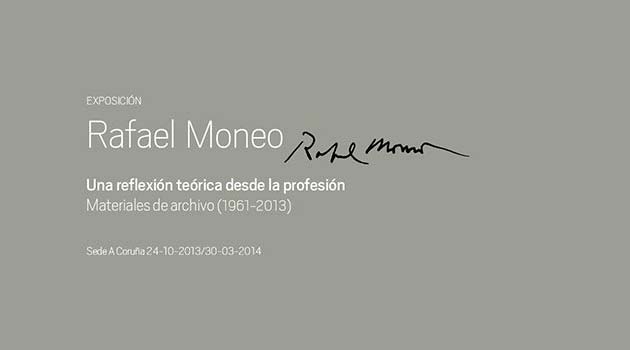 “Mies Van der Rohe, Le Corbusier, David Chipperfield, Gonçalo Byrne… now Rafael Moneo. With this new project, the Foundation Barrié continues producing honoring to those who understand, as us, the architecture not as a spectacle or a technical and aesthetic ostentation, but as a link between the inhabitants of the city and the experimentation of the space”.

The exhibition, which it will be possible visit in To Corunna until March 30, 2014, is organized in five biographical sections that approach all his career, where 46 projects will appear across 18 models, between which one finds that of the National Museum of Roman Art (Merida), one of his more emblematic works; 142 photographies and 98 original drawings.

The selection of materials puts special emphasis in the importance of the drawing as fundamental tool of which the architect has used to develop his work and as way to define his thought. They accompany to the drawings, models and photographies of the file that help to illustrate the selected works. This one is the first occasion in which such a significant set of original drawings see the light to show the trade and Rafael Moneo’s thought.

From the first work exposed in the sample, his offer for the Plaza of the Obradoiro in Santiago de Compostela (1962) that cost the Prize of Rome him, Rafael Moneo’s architecture has demonstrated to resist the temptation of creating a recognizable own style or of falling down too easily in the trends of every epoch, implying deeply his projects with the specific problematics which they face. It is difficult also to separate the writings and Rafael Moneo’s teaching of his own professional work as architect. You design on composition, typology, construction or place have occupied a relevant plane along his career. But it is probably the reflection on how the buildings get stuck with the history of the architecture and of the city the pedagogic reflection that will turn out to be more determinant in the development of his work and that of different generations of architects educated by him.

Rafael Moneo: Una Reflexión Teórica desde la Profesión. Materiales de archivo (1961-2013) narrates the professional history of an architect who sought to define an approximation to the architectural project on a base to discipline stablly in the middle of the changeable conditions of his epoch, taking the difficult position to claim the architecture as culture and as specific form of knowledge. This story not only extends before our eyes the work of an architect especially, but also it reflects an important part of the history of the recent architecture across his look. From the trends organicisms and structuralists of 1950s-60s, to the Italian speeches on the city in 1960s-1970s, to the theoretical anxiety of the architects of the American east coast in 1970s-1980s, to the creation of star system global of 1990s, the exhibition in his five biographical sections how the architect resists, reflects and absorbs these diverse interests of his epoch to shape a cultural own reflection. Nowadays, after the excursos you will interdiscipline of last two decades, the review of the career of Moneo around it appears as an opportune occasion to discuss which is the work of the architect, what can offer to the company of his epoch and what type of knowledge it implies.

Rafael Moneo. A theoretical reflection from the profession. Materials of file (1961-2013)