The Foundation Barrié is presented, for the first time in Spain, By Type in Motion, an exhibition of the Museum für Gestaltung Zürich (Museum of the Design of Zurich) that will appear in his headquarters of Vigo from December 1 until April 1, 2012. The exhibition is comisariada for Andrés Janser, conservative of the Museum für Gestaltung Zürich and it will be inaugurated tomorrow on Thursday, the 1st of December (20.00 hours). Be on the screen of our computer, in the television or even in the fronts of the buildings, due to the digitalization of the daily life in many occasions we are before the phenomenon of text in movement. This exhibition shows these new ways of ” reading the world “. 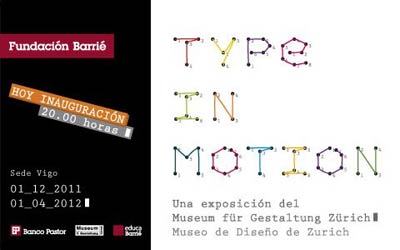 The digitalization of the daily life has created a situation in which nowadays we see all over words, phrases and enclosedly complete texts in movement, be on the screen of the computer, in the television or in the fronts of the buildings. The designers use all his ingenuity to use typographical dynamic sources in a great variety of devices. Hereby they extend and modify the different ways that we have of ” reading the world “. We react with major attention, obtain an enormous quantity of information, a lot of of which it gets up-to-date constant, of a surface of small dimensions, or amuse ourselves in a surprising way. The pace of the above mentioned texts often synchronizes with music or sounds that we perceive simultaneously.

This exhibition composed by almost 120 works of more than 80 designers, offers a wide report on the important changes of the communication and the means in the contemporary world and shows for the first time the trends most emphasized in the area of the text in movement, across musical videoes, sequences of titles of full-lenght films and interactive facilities in three dimensions. These backbones of the extensive universe of the dynamic typography are surrounded with announcements and shorts, fronts multimedia, animated graphics for television and radio, digital postcards and logos of the most varied places of our planet, as well as ad hoc sceneries adapted to the contents and thematic areas of the exhibition.

Andrés Janser, commissioner of the exhibition, explains that ” when the words are presented in the shape of image, or vice versa, or when the images are constructed virtually by words, the story becomes more complex, and the school process is extended to include a series of emotional aspects. Concretely, when the music, or of more general form, the sound begins to form a part of the game, enriching it. In fact, the pace of the texts in movement often synchronizes with music or sounds, appealing to more of one against our senses simultaneously. On the other hand, the process of reading becomes more enterteining when the texts appear in front of our eyes of not linear form. “

The difference between these exhibitions objetuales dedicated to the Design and Type in Motion takes root in that the latter is an interactive sample based on the participation of the public and that supposes an approximation to the youngest public, and to the users of digital formats and the new technologies of the communication, both with the approach and explanatory contents and with the didactic programmed activities.