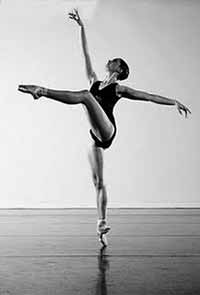 “In the ballet the dancers danzan commonly on the tips of his feet. At first sight this behaviour seems so much artificial like without sense. To understand a so important appearance of the ballet one has to investigate the nature and the meaning of the vertical in the human life.”

In the far Africa of does seven million years the first hominids, our more remote ancestors, had to enfrentarse to a climatic change extreme. To an environmental warming of global scale that produced like consequence a gradual and severe decrease of the forest mass. The natural habitat, mainly arboreal, transformed  then of significant form, forming in little time a landscape of big and unsure open spaces.

The traces found allow to conclude that in front of so important vital challenge those first primates cuadrúpedos, those that did not have more remedy that descend of the trees and adapt to the rigour of the extensive surfaces to follow living, opted of way instintiva for changing his posture in front of the half and began to walk heaved on the earth.

Those survivors achieved to evolve, who know if by chance or by need , thanks to a new and effective way of enfrentarse to the world; they abandoned the horizontal and transformed  in vertical beings, gave the big jump to the bipedestación.

In fact it has been able to  check that the biped position resulted to be very convenient in so vulnerable conditions of life.

The new vertical presence facilitated them to look over the horizon over the vegetation in search of refuge or predators. It was allowed to them, in turn, that the different individuals had the opportunity to transport instruments and objects, or even to his babies, with the hands, liberated definitively of the function locomotive. The movement, the march, in these conditions turned out to be clearly slower than the horizontal quadruped one, but much less costly energetically, which had to be of great usefulness to travel and to cross long distances in the sheet, or in a poorer habitat in resources that the forests or the jungle from which they were coming. And, as great additional advantage, such a change of position supposed being capable of exposing great less corporeal surface to the Sun, allowing to take advantage of the regulatory effect of the wind, managing not to warm the body in excess and, which is more important, to save water, very scanty in those days.

A lot of time later, there does approximately hundred fifty thousand years, the nearby and capable homo sapiens, descendant from those first biped hominids, it had to be unrolled again in a climate that led to the planet to a widespread desiccation. Once again, the strong stimulus of overcoming did that it was moving far beyond of his natural borders in search of the survival.

That first man was colonizing little by little the Earth and fixing the principal features of our species, transforming in a being increasingly evolved thanks to his privileged and powerful uprightness opposite to the world. Being liberated of the soil and ascending perpendicularly with regard to the horizon in imitation to the daily movement of the stars, it could answer corporeal and mental to the need to try to dominate and understand all that him was making a detour.

It might be said that this one was the birth of the most important of the revolutions in the whole human history. The physical and mental attitude that supposes the adoption of the vertical one, his dominating capacity opposite to the physical space, opposite to the nature, can that major achievement has been ours as species.

The vertical one, line that ascends not without difficulty, aspires to something top. The animals, the things, the presences, lie horizontal, calm on the land, or rise perpendicularly, liberated of unnecessary supports, active and expectant. The impressions change glaringly. The psychic sensation of the horizontal thing provokes regularity and quiet, the vertical thing, nevertheless, transmits emotion, search, exaltation of the soul.

A tree, a man, in horizontal position, though stable he turns out to be taken off of the life, on the contrary, in his lifted position throws his branches, his look, to the sky, to the sublime thing, I tighten towards the transcendent thing.

With the vertical one it begins the history of the human culture and the gradual conquest of the sky and of the land. But our real history, the origin of our more important legacy, is possible that it began actually it does only thirty thousand years. In this remote and lucid instant in which an original will solved the high need to represent, expressing and forming his thought. In that moment in which his intelligence could ascend, penetrate the animal limit, and I act to satisfy, not already his more primary instincts, but his intellect, his creativity and his spirituality.