When the predecessor of the man, as today we know it, it incorporated his body on the vertical one to overcome a new link of the evolution, knew not only of the difficulty of the titanic task of raising and becoming detached the look of the soil towards the horizon but of the weariness that this action was provoking him. To sit down so comes to mean, for obvious that looks like to us the reflection, the search of the immediate rest to the effort to support the vertical one. Stop in the way of the nomad Abel for, at least for a moment, to turn into a Cain who is done partially by a territory. A minimal territory, which occupies one itself and his capacity of control around following the guidelines that Edward T Hall explains to us in ” The dimension conceals “, since one does not occupy only what his body, but with his possible actions. To sit down, I dress like that, it has relation at the time, not only with the rest but with the local appropriation, at least temporarily and with all his cultural associate manifestations. 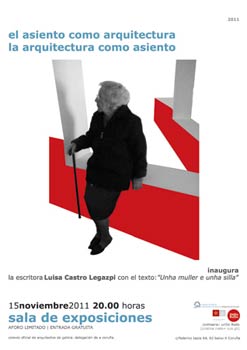 The significant title of this exhibition: the seat like architecture and the architecture as seat, he sends us to a double interpretation. On the one hand, the seat like machine, an invention that allows the rest and that belongs to the family of the architectural thought. It is a question of the seat made as piece that it separates us from the soil that fulfills, as the architecture, three classic rules, firmitas, utilitas, venustas, and that places, when it is not nomadic, in the enclosure or territory to cutlery and protected from the architecture. On the other hand, the own architecture, the vernacular one and the contemporary one, the first one of spontaneous form and the created and well-considered second one ex-I practise to use also as arrangement, as seat and rest.  The edges, the links, interiors and exteriors of the architecture like places – forms where to accommodate the rest and to interfere in the relations of the physical and stable thing with the actions of use of the citizens.

The seat in architecture along the history, has been an object machine, frequent little out of the social classes prominent and reserved only to the top hierarchies up to very recent epoch. His use, as we know it nowadays, only it began with the Dutch domesticity of the SXVI and became strong more recently in the French SXVIII. It is only from middle of the SXIX and later at the beginning of the SXX when in parallel with the improvement of the domestic and social conditions, his use spreads gradually and massively. Till then the silla, the high seat of the soil practically was reserved to the highest hierarchies of the royalty, of the aristocracy and the church.

In this model succinct and general exhibition of the seat in the SXX, we are interested then in the seat in architecture from two opposite angles:

The majority of the actions developed in the architectural space related to the socialization and the work take the perfect machine of the seat as a support. To eat, to study, to work, to talk, to discuss, to play are more or less social actions that go the major one of the times joined the seat, that is to say, we make them seated.

2 º as use and subversion of the own architecture to be used as furniture. Architecture well-considered and adapted to rest and to offer place where to stop. Very probably here there is no better way of speaking on this perception that to be sent to the architecture of the Dutch teacher Herman Hertzberger, both in the analysis of the action and in the result of his offers of using his architecture, so much to the interior as on the outside, fresh and basic relations of socialization to sit and to be established.

The exhibition tries to open the door for the reflection, in both expressed meanings, on the importance of the most basic actions of the uses of the inhabitants of the architecture, on having sat down and on the seat, so much across the vision of some of the models more acquaintances of the SXX as of the reading of the texts of the catalogue edited by Luis Gil and Cristina Nieto and writings on the subject matter for: