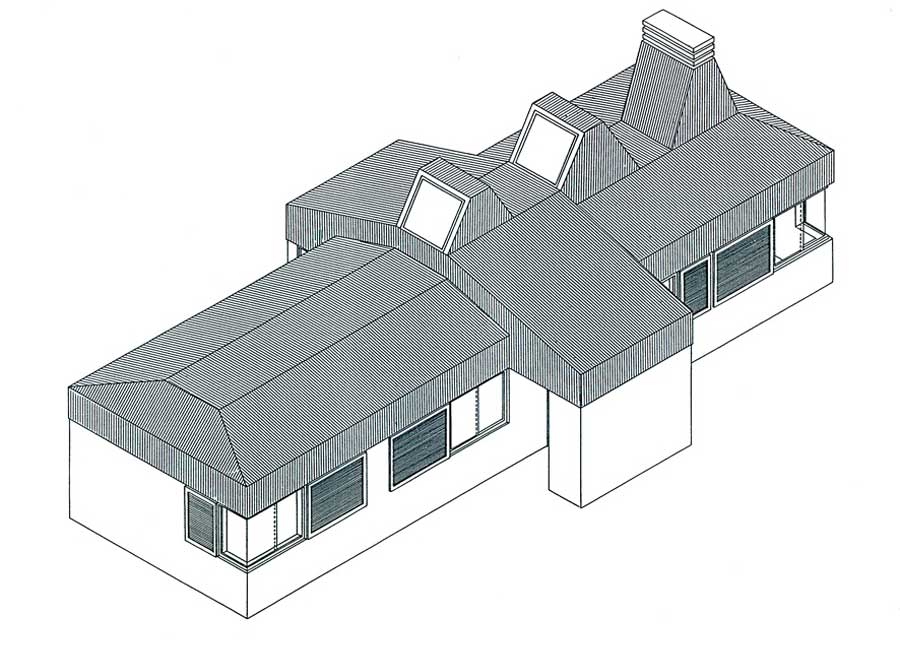 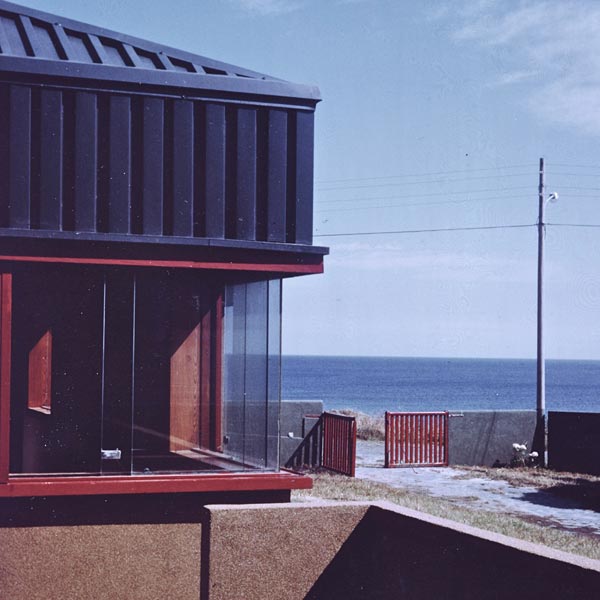 He was ten or eleven years old when I happened my first summer in Galicia in 1979, the first one in which also I started thinking about the architecture to the margin of the recollections of the works of engineering that it had seen accompanying the environment of work of my father. I explain, I started, this summer, seeing the architecture not in the intuitive way in which Aldo van Eyck indicates us that the children discover the basic questions of the architecture, before five years, as exploratory game of above and below, of inside and out, but looking at something beyond, with the pretense that gives you this frontier age in which already they leave you to have and to handle your first razor, though really it does not cut. From this first summer, we visit to our family that his days of rest were spending on the coast of Lugo of a diverse and almost opposite way, so while, a part of my uncles and cousins they were doing encamped in the former camping of the dunas of Reigning, another part of the family they were residing in some of the small chalets of beach of Barreiros’s colony, also immediate to the beach.

These two forms, we are going to say of being, of happening or to be located temporarily for the rest, good in a camping or in a house of summer vacation they were obviously seemed in the aim of the proposed summer rest but, in the bottom, very different in his way of obtaining it. Today, with the distance and the time of for way, which I continue being interested from the architecture is the same thing that enriched and surprised me as child that summer and the successive ones, seeing the difference, between two ways of being in the world, more static and another nomad. Very specially, I surprised it and it continues making it, the wealth in sensations of the learning of live fragile and frontier in a shop of campaign or in a roulotte, inside a collective space of civic common and simple responsibilities of a camping, which is a city in miniature. Those days the feeling of the basic thing showed in the civil child, not architect, across the room, in a minimal space constructed by a light structure that was supporting the senses flush with skin at the edge of the possible thing. An architecture that is a long before coming to the image of the architecture, listening and being sorry the nature almost to enter the circumstantial house and at the same time offering a sensation of protection and of great resistance, which these so simple structures obtain, opposite to the adverse climatology and immediate exterior geography.

All that was like that in the visits and stays more or less prolonged in the camping, something very easy of understanding for a child, an architecture that everything it solves with a technology that almost it looks like a game. Nevertheless, nothing of this happiness of the frontier thing seemed to happen in the times of stay in the “stable” residences in the colony of chalecitos of Barreiros. 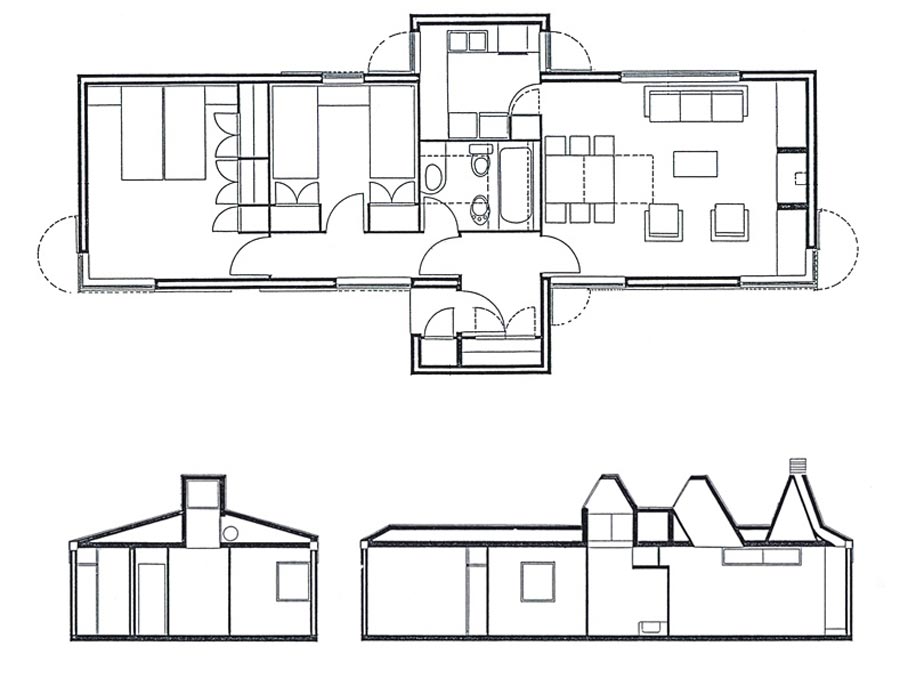 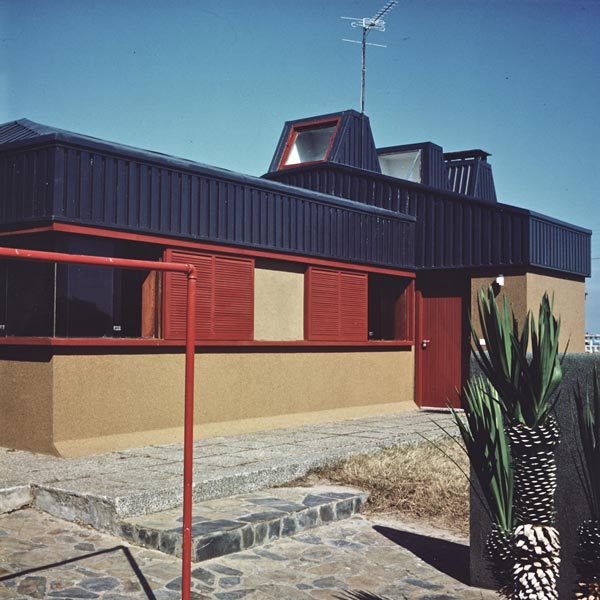 That one was another way of spending the vacations in a small and dense plot of small chalets without major architectural interest but that supporting a density in the group there was demonstrated very respectful by the territory and immediate geography that some years later it stopped existing… In these other visits or stays, I saw either any wealth nor major happiness with which I was providing myself to be of encamped, not in everything, not in the particularity of none of those houses, with the only exception. This exception, nevertheless, is equally fixed somehow in my recollections so much like to live wealth-producingly in the camping, a small house with the cover of sheet inside that colony to the immediate edge of the sea.

Let’s say that from the eyes of a child that house was different to other, and for my summers companions, other children who were residing in the rest of neighboring houses, that one was a slightly strange house or rare sight according to the topics of the imaginary small bourgeois of the epoch. For me, which already had learned to scanty meters to live the fragile but royal architecture of the roulotte and the shops of campaign, on the contrary, that one marries age of a great proximity both in the formal expressiveness of his cover and in a felt happiness of to live that it had to see with this declared form.

From that one at the time I did not return not to Barreiros not to Reinante to almost twenty years later, already the camping of the dunes did not exist of Reinante, neither (something that was not completely incompatible with the environment and, nevertheless, in exchange yes there exists a highway that comes directly to the beach of the catedrales a space to which it should not accede of this form or of almost any that was not peatonalmente), existed already the Barreiros that I knew, the immaculate and frontier landscape and the natural geography to the coast, which remained devastated by a voracious speculation and a lack of control and public responsibility for all known. Nevertheless, yes the small and dense original colony continued existing where I remembered that there was located that house, example of which it is not impossible to construct with respect and common sense at the edge of any natural geography.

I believe that the curiosity led to visiting that house to me pushed for a nice recollection of the infancy, and of my first contact with the architecture of the nomadic thing that now I know that it is closely together of the educated architecture. And there it was, almost perfect, resisting not only to the passage of time but very specially to the denaturalization of the space for the hand of the greed of the construction deshumanizada of those years. I knew for then that that house was the refuge of vacations of the architect Carlos Meijide (and his family), and then I began to understand otherwise the house that nevertheless already knew with the look of the child that before I recounted. It was not very different from the imagined, because those who were surrounding this house he says to us without entering what is. It is one of few houses that I have known later as architect, of that I do not need to know almost of his plant, only of the section expressed in his cover, to know which is his truth. The quiebros of this cover that are the expression of a section that not only looks in horizontally, but in diagonally and vertically, speaking about the reason of the deep thought of the architecture with the same happiness and sincerity with which a child learns architecture in a shop of campaign without knowing still what is the architecture. Quiebros that are an expression of he her tries of ventilation, of lighting, of respite of the brief and austere program expressed in the simple one and perfectly articulated plant, inside the scantiest plot. This happiness and intelligence that transmits with his absence of pretensions, inside his contemporaneousness, is the one that does of her still today, forty years later, an architecture of great intensity and of the richest reading. 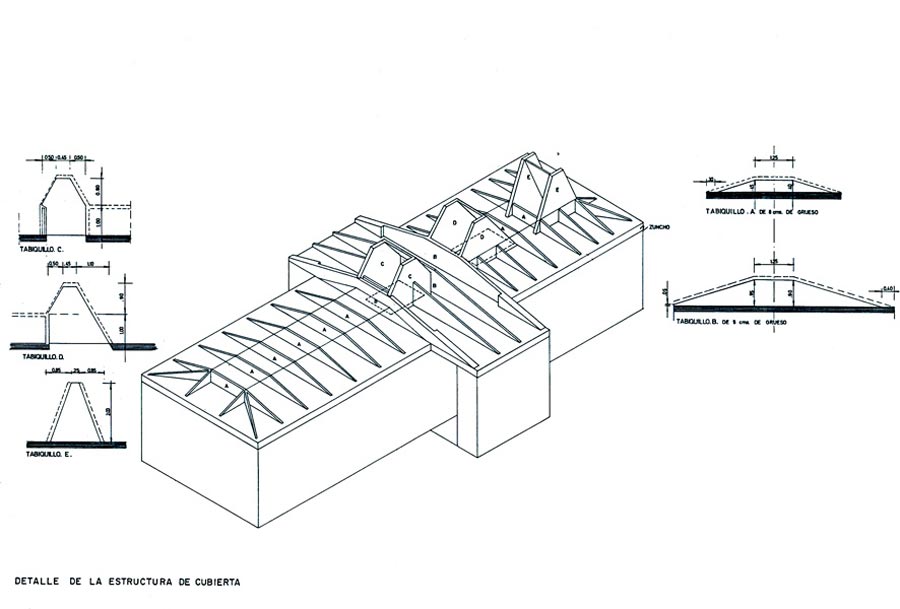 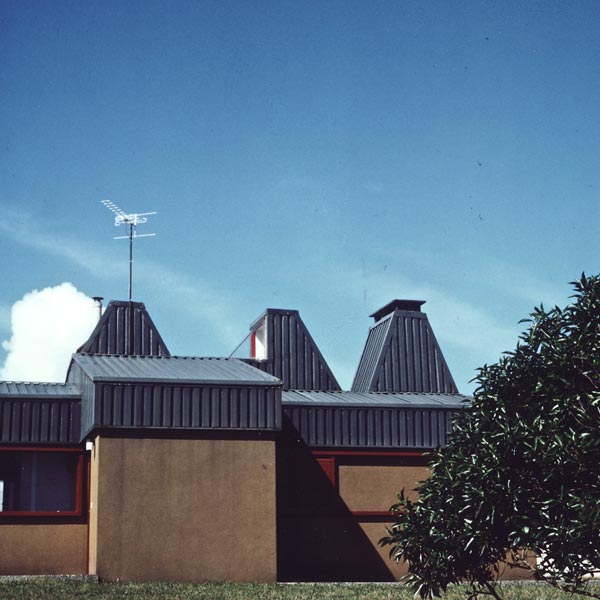 To define and to know other aspects of the house, I believe a brief description, technology is enough and from the successive adjustments of the construction to the passage of time, facilitated by the study Jorge Meijide-Patricia de Marichalar guardians of the file Carlos Meijide and natural prolongation of the category of the this great professional trade:

“The house never suffered modifications either in his plant or sections from his construction (of hand of two only bricklayers who did everything), but if in his exterior aspect, of I initiate the cover, of sheet of steel folded Lesaka, it was identical with brown color ” clear chocolate ” and the exterior contras of the windows in the natural color of the pine torch simply varnished .Mas is late, in the epoch of the photos of this photographic present article, concerning the eighties (slightly more than ten years from the beginning of his construction), the sheet of cover, spoilt by the saltpeter in eaves and different meetings, is repaired by glass fiber and makes up of naval dark grey. The contras, after years of sanded and varnished, make up of red, this continues this way until in the year 2000 it is decided to change the cover to copper and to eliminate the granulite, already enough rotten, of the fronts.”

Carlos Meijide spoilt in the youth of his maturity, is an architect whose work is for approaching and to study in a scientific way. An architect who has very much still that to teach us across many of his projects and almost unknown constructions. Carlos Meijide was an architect of deep trade and architectural culture, companion and teacher of several generations of architects, who continues being capable of thrilling with his works the citizens who live through them, as inhabitants or citizens, like to the ten or eleven-year-old children…

The plant, sections, detail of structure of cover, axonometría and scanned photographies are a graphical original documentation, without re-drawing of Mejide-Marichalar Arquitectos’s current file.