During certain time the interests of Le Corbusier ranged between the architecture and the painting, after his movement to Paris in 1917. Together with Amédée Ozenfant it founded the movement named purism, creating taverns in which it was combining the scientific character of the cubism with a classic sense of the harmony. This association of modernity and classicism turned into a constant of the whole work of Le Corbusier. In the twenties Le Corbusier was writing in ” Towards an Architecture ” (set of considered basic texts for the Modern Movement), he says in, that the Great Prize of Rome and the Villa Médici they were the cancer of the architecture. The book published by the first time in 1923 is a summary of articles that the author was writing for the magazine ‘L’Esprit Nouveau’ that he itself was founding together with Amadée Ozenfant. In his book he was claiming for the architecture the rigor compositivo of the classic temples at the same time as the generalization of a new language based on the aesthetics of the machines. In the mentioned book, Him Corbusier juxtaposes with brilliancy photographies of classic temples with others of cars, affirming that these objects were those that expressed with major genuineness his respective epochs. The challenge for the modern architects he was taking root, according to, in constructing buildings of agreement with the new technological models. 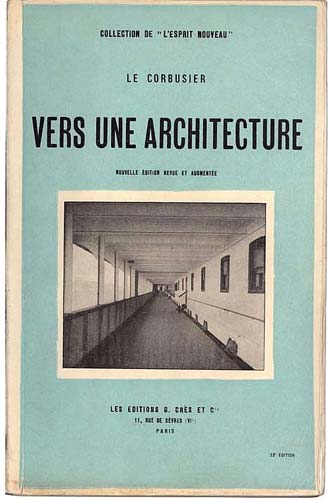 + article is published in visionesdevanguardia.com