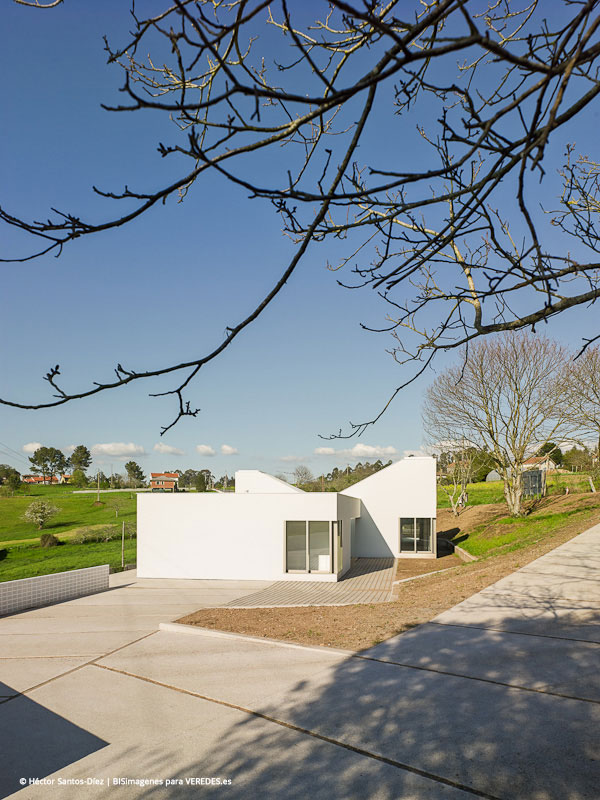 To project an infantile school in a complex plot, for his accesses, his topography and dimensions but located in an environment with such a high potential, it has to make us think how we must locate ourselves in the territory.

Since the place apprehends from the approximation to the new architecture and in a reciprocal way, since there have to be impregnated the spaces of the local character.

Since in so many other cases we are before a location placed to the limit of a road vehicle, of intense traffic and that it will constitute the access.

Plot of high slope, which places immediately under this line of rolled communication and in turn in the high part of a water-course which horizon extends up to the distant vision of A Coruña.

It is a question of a location next a small village, which for his proximity to the urban center of the municipality, begins to show symptoms of the rural – urban confluence and where we understand that our action must interpret the speed and scales of approximation to the new equipment, as well as the dialog with the constructed existing reality.

The building is born so as response to a double approximation. The first one, rolling and rapid across the car; and the the second, distant and progressive, from the low level, which allows to understand his position under the protection of the horizontal road of access.

The building is implanted in the diagonal of the proposed plot. It allows to preserve both existing chestnut-trees and to provoke, up to his arrival, the perception of a building of ground floor, broken covers in continuity with the paraments and on a large scale reduced. In his approximation the building reveals his longitudinal directive and the comprehension completes of his implantation.

To be located in a rural environment allows to be employed these aspects at depth, so that the functional resolution of the program of the building goes on to a background before other questions more linked to the territory and to the landscape.

As for the functionality of the school, we seek to provoke a transverse communication between phases of learning; the discovery of the space and the volume, across the different stages of the growth; and the temporary interaction across the incident of the natural light.

Provided that the educational center is thought to satisfy his inhabitants, not only in the scale but in the perception of his environment, it has been a question of contributing density to the work of the surrounding ones as filter and limit of the spaces.

The public spaces associated with the new equipment are understood as extensions of playful – educational activity and they propose spaces disfrutables so much for small as for adults.

The urbanization draws with clarity the paving and the gardening, reflecting a tapestry opened for the surrounding spaces that arranges the itineraries of access and gives identity to the environment, doing aprehensible with his tour the totality of the landscape across the itinerary of arrival.