The contest expects select the best proposal for the design of a prototype of household with courtyard, with a construction of low cost, set aside for poorer families, in a flat topography area, within the perimeter of Luanda. 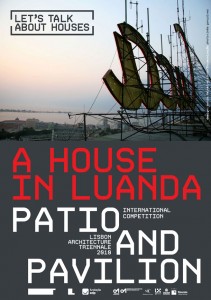 With the contest is expected to create a model replicable that translates the social, economic and cultural specificity of Luanda, wanting that this model “does city”, using systems, practices and materials of the architecture local. The construction system should privilege the logic of the sustainability, being able to consider the construction for phases or the use of the auto-construction on the part of his resident futures, with the desire of a prospective attitude associated to an evolutionary model component. The total area of the field is 250 m² and the total cost of the construction will be of twenty-five thousand euros.

Although it not yet be a certainty, the Triennial one seeks to do all the efforts needed to arrive to promote the construction of this household. The share in the contest is open to Portuguese architects and foreigners that registered people are in his respective professional association.