“It becomes deeply attached and is surprised. That one that it does not fit”

SITUATION and FORM of the LOT.

The location of the architectural element to rehabilitating and extending occupies a position of border in the residential plot of a small villa of the province of Pontevedra close to the river Ulla. It places in a linear band organized at the edge of the river where there are located both equipments of public use and constructions that shelter uses of industrial and port nature.

The place of work is a final point of the plot of domestic uses, being the transition to the river interrupted of sudden form for the presence of a highway adjacent to frequent and very rapid step of vehicles. The construction that it considers to rehabilitate and to extend is limited, towards the river, for the mentioned road one of great density of use and towards the domestic or residential fabric of the city for a narrow street that uses his low commercial ones as area of night scattering. The surface of the plot in the one that proposes the project herself is of rectangular and horizontal proportions. 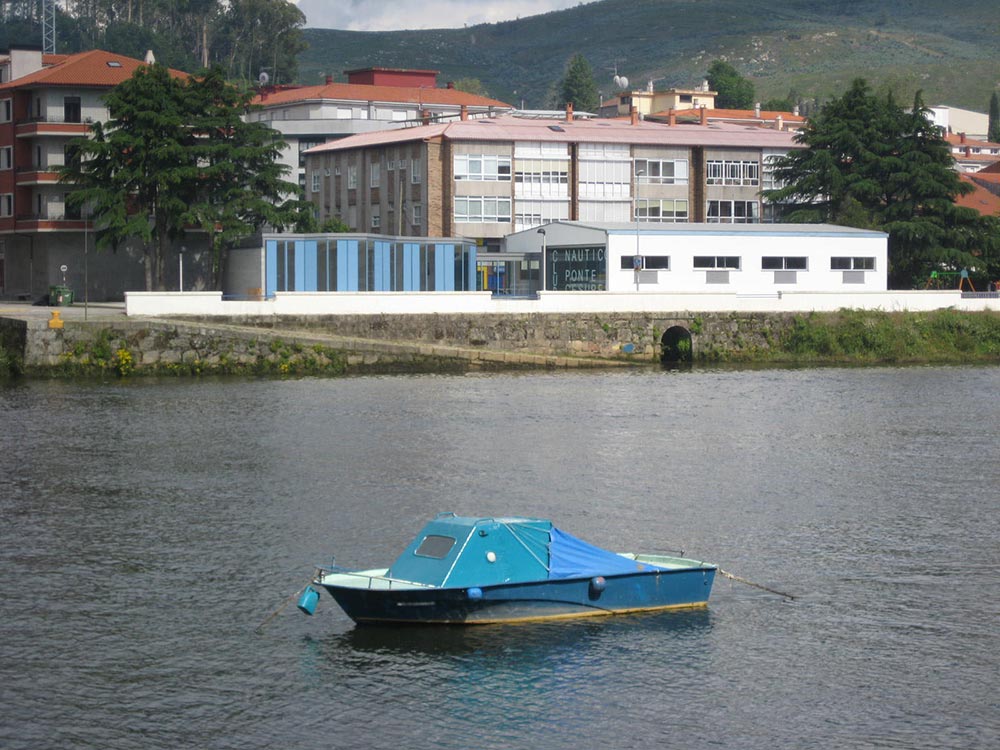 The original building is a construction of the seventies without a formal characterization of architectural remarkable importance and that was solving the demands and functions that were given to administer to him in a forced way.

The uses to which there will continue destined the rehabilitated construction and the foreseen extension, continue being the same that the original ones there being implemented the surfaces of the previous building to receive, inside a new distribution and organization a new gymnasium and areas of entry and new wardrobes and sauna.

The structure of the program organizes principally environment to:

1º A principal area for storage of the different crafts of oar and piragüismo that occupies great part of the volume and plant of the original construction, which has access from the square at the head of the building, so that not between in conflict the access of the crafts with the flow of vehicles of the adjacent road. This new zone of storage of crafts grows in dimensions including in addition a specific area for the arrangement and to the bottom of form could ventilate and evacuate this way the gases of the resins and used tails repair of the ships. He took advantage of this zone offered by the former store because the thermal conditions and of isolation they were not demanding and the former store was expiring too, after re-conditioning his cover and closing.

2º A narrow and horizontal volume that occupying the totality of the part this one of the plant of the former building extends for towards the exterior of the square opposite to the river. This narrow piece tries to relocate the functions of wardrobes (interior) and (exterior) gymnasium, organized into a hierarchy and separated across the accesses and corridors of relation. The wardrobes, being adapted to the regulations of persons’ accessibility by limited mobility, they contain also a small sauna and counter fires separate for regulation of the Regulation eat an independent area, sector of fires, of the store of crafts considered local of special dangerousness, so much in wall as soil and ceiling, they work do totally autonomous, also to level of architectural expression.

The construction that it proposes to rehabilitate and to extend tries at the same time as to solve the new demands of the program and adjustment to the current uses to improve the relation of the original construction with his surrounding one. Till now the massive and closed volume of the nautical club was appearing as a piece with relative isolation of the urban plot that was using him as support, so much for the relation of the internal program with the surrounding next one, since for the reading of the square and pure volume in relation to the horizontal constant landscape that wraps it.

The fact that part of the program, the new gymnasium, goes out of the principal and original body towards the square of the front it establishes urban dialogs and of contour that they were not meeting on such an opaque and massive piece as the original one.

There are established in addition tours and relations of frontalidad of the new set towards the river and the ramp of descent of crafts that previously did not exist. There is understood therefore in the new project that the implantation does not finish off in the location of the immediate environment of the new piece but to another side of the route when the crafts already have crossed the road and go or turn way of the water.

An as hierarchic as possible sequence tries to establish between the different parts do program so that his reading is clear and structured for his users. A narrow and long body contains the functions of wardrobe and gymnasium, so that occupying a necessary minimum of the width of the previous building, to leave the major possible dimension for the store of piraguas, extend towards the exterior growing and advancing all that is precise so much lengthways as widthways inside the space liberated inside the square.

This narrow sequence that extends towards the exterior separates the principal uses of wardrobe and gymnasium by means of an access and control that is opened both for the square and for the back street, in an attempt of not closing the urban relation of the building with his back, not visually from the city with opposite to slant of own building.

Of equal form that the narrow body that contains the functions of wardrobe – accesos-gimnasio supports a linear – horizontal articulated relation of inside towards out in plant, his reading in volume is constant supporting the alignment of the section and differing from the original level, in an absent socle from some 15cm, from the building that will contain the location of newly extended area of the store of crafts. The increase of volume towards out for needs of the program, in the area of Gymnasium, serves in the opposite reading, of it was inside, to direct and to lead the user to the interior of the area of access.

For general motives of economy, rapidity in the assembly and guarantee of the execution the structure of the new body in extension, of inside to out, realizes in structure of wood laminated of pine fir Gl-28, with punctual mixed solutions of concrete and steel. This solution of the new body of wardrobes, accesses and gymnasia based on a light structure of girders and isostatic supports derived from the impossibility, for economic motives of project, to do a traditional foundation, in an area of landfill without any consistency, which immediately he was sending to a pilotage or deep foundation that was unviable economically to the beginning of the work. It was chosen for a light structure that was transmitting neither big loads nor moments to the area so that the foundation was not needing almost to penetrate, on the basis of superficial girders in disposition of railroad line. The wall of block of concrete that it wraps to the exterior gymnasium is the arriostramiento and rigidizador of the porticoes of the structure of wood, so that not only it is a surrounding coat that offers to the street but it turns into structural principal wall of arriostramiento of the part of the building destined for gymnasium.

In the old ship of the nautical club there was respected for the same motives of economy the preexisting structure of porticoes of concrete, saneándose the contacts between the structure and the closing where fissures were observed.

The orientation and position of the different parts of the program in plant owe his justification odd number only to motives of joint and optimization you give functions to satisfy in the program but also to the logic of economy of facilities of reparation and electricity of the set valuing the linearity and uniqueness of tours to being realized.

To suppress therefore, of passive form, means and not necessary materials of facilities in this intervention.

In reference to the space of the front square, the new conditioning and growth it offers an urban front, new front that is late of way staggered towards the entry. This is like that not only for motives of the structure of the tour of access and organization of the internal program, but as doubling that leaves and reserves on the outside a continuous part of the superficial foundation as public bank for use opened of the citizens and users of the nautical club. The wide inner door of the store of ships, which is solved by a great gallery of Finnish type by technology of opening and hang Dorma, it tries of form obvious to be transparent, even in enclosure, the existence of the ships and interior of the ship so that it is a continuity of the exterior public space towards the interior.

The later part of the building realized in factory of block besides his capacity of closing and structural collaboration of arriostramiento, before mentioned, did not re-see not pinto offering with his finished native, a surface of slightly agreeable tact to the paintings and grafitis that in this zone of the city are habitual.