Conference of the Swiss architect Raphael Zuber in the ESARQ-UIC, inside the cycle ” Forums Esarq 2015: Question of things “, Raphael Zuber will explain 4 recent projects, under the title 111. Assembly hall ESARQ_UIC. 19h. 9-2-2015.

In the conference “111” Raphael Zuber will do a tour for his recent works that exemplify his way of approaching the architecture from the concept, from the study of the geometric simplicity. 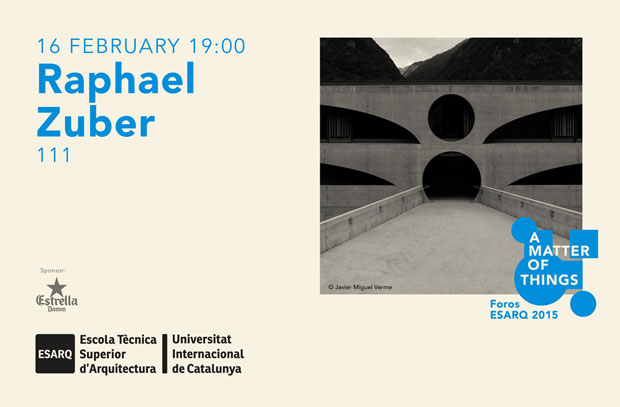 Raphael Zuber studied in the ETH of Zurich and opened his office in 2003. With his first work the school Grono gained in 2012 the Prize “Swiss Earthquake” of the Foundation for ” Structural Dynamics and Eaarthquake Engineering and the Prize Good Buildings Graubünden. The project of the school shows Zuber’s precise work with the formal language of the geometric simplicity, the structural and programmatical solution of the building, to turn a modest program into scale and budget into a highly sophisticated building.

Zuber combines his professional labor with the teacher, since teacher visitor has given courses in the Accademia I gave architecttura gave Mendrisio, in Cornell University or in the ETH Zürich, at present he is a teacher in the School of Architecture and Design of Oslo.

FORUMS ESARQ is an annual cycle of conferences that organizes the Technical Top School of Architecture of the Universitat Internacional of Catalonia (ESARQ-UIC) in which architects of prestige, national and international, will share his vision of the architecture and of the profession across his works. In this occasion, under the title of ” Question of Things “, the director of the cycle, Jorge Vidal, proposes to think about the work of the architect in the urban context.