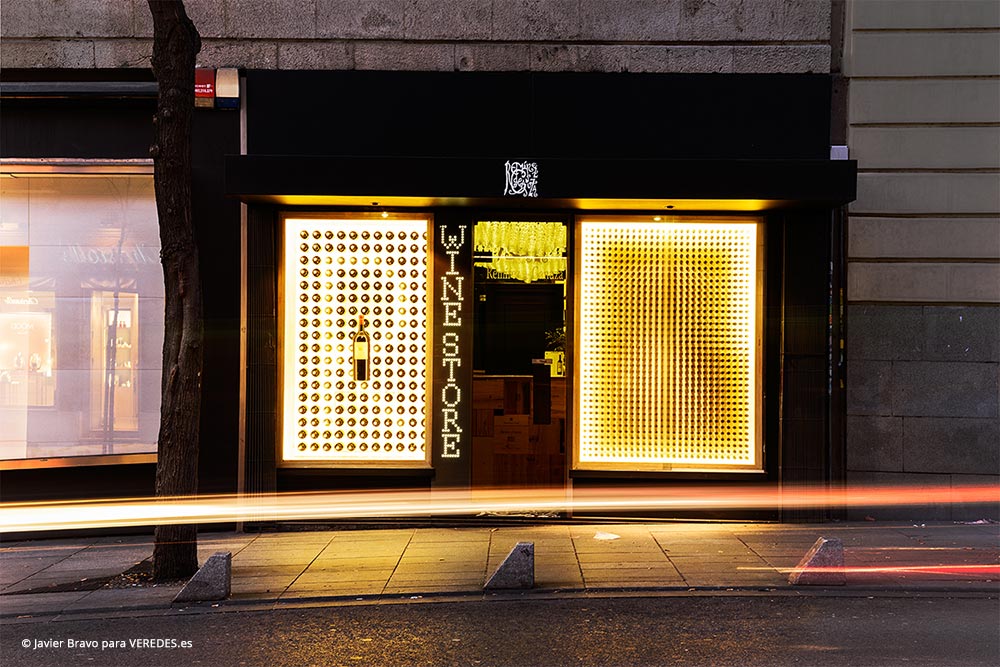 The project consists of the complete remodeling of a business premises afoot of street, turning it into a shop of wines into the one that the representation of the principal elements of the warehouse is present. The shop is the warehouse, and the corks, bottles, glasses and boxes of wine believe a landscape related to the above mentioned world.

Since it is possible to observe in the dimensions, the width of the space is minimal. Therefore, the aim is to support the organizational scheme of the front and to take advantage of the lack of natural light of the space to be able to modify the light conditions of the interior.

For it, the offer consists of simplifying the planes of materials and of playing with the textures that resemble the nature of the wine.

Six planes that define the space must tend to be simplified in the forms and a common model adopts between yes. For it, the lateral planes of the space present a diffuse light in his length, which arises as protagonist of every surface. The frontal plane is in use for promoting the dimensions of the space, using a mirror that reflects the light of the exterior.

It is necessary to emphasize the appearance of the elements that take possession of the space and of the remaining planes: a central table composed by boxes of wines and a lamp that the crown formed by glasses.

The central table constituted by boxes of bottles of wine macladas, by means of a system that allows the infinite multiplication of the volumes. The structure of the boxes allows that there should not be necessary the placement of a secondary structure, contributing the inflexibility and the resistance necessary for the use for that the above mentioned table will be destined.

As coronation of the table, in the surface of the ceiling there arises a lamp composed by glasses of wine that cross a set of splines controlled geometrically. The support of the glasses realizes by means of guides of methacrylate, that they support the weight of 293 glasses of wine. The above mentioned curves generate a few sinuous tours that offer a result become warped to the final disposition of all the glasses, and allowing that the beams of light of the lamp should affect in the surfaces of the glasses and are reflected in all the directions.

The space remains finished off by natural materials that allow to generate uniform surfaces, in which the principal protagonists are the light and the game of the same one on each of the textures. Therefore, the intervention raises a minimal modification of the constructive form of the space, and a remodeling of the appearance by means of small alterations of the light and formal sensations.

He has taken advantage of the existing organization of the shop window, intervening exclusively in the exterior aspect, and playing with the infinite character of a sequence of equal elements.

The intervention plays in every element with the repetition of simple elements by means of a schematic mechanics, generating polyformic surfaces, which receive of the exterior the reflection and the incision of the natural and artificial light.