The project, consisting of the remodeling of one former bus station for his new use like parking rotation, part of a few determining complexes: an urban development very restrictive regulation, a geometry of irregular plot and a very limited budget.

The principal premise proyectual was undoubtedly the functionality, but at the same time, we take each of the challenges as an opportunity to give “hare for cat” and to take beyond the expectations by means of creative solutions and the elegant design of all the elements that shape the project: structure, lighting, facilities, signals, etc. 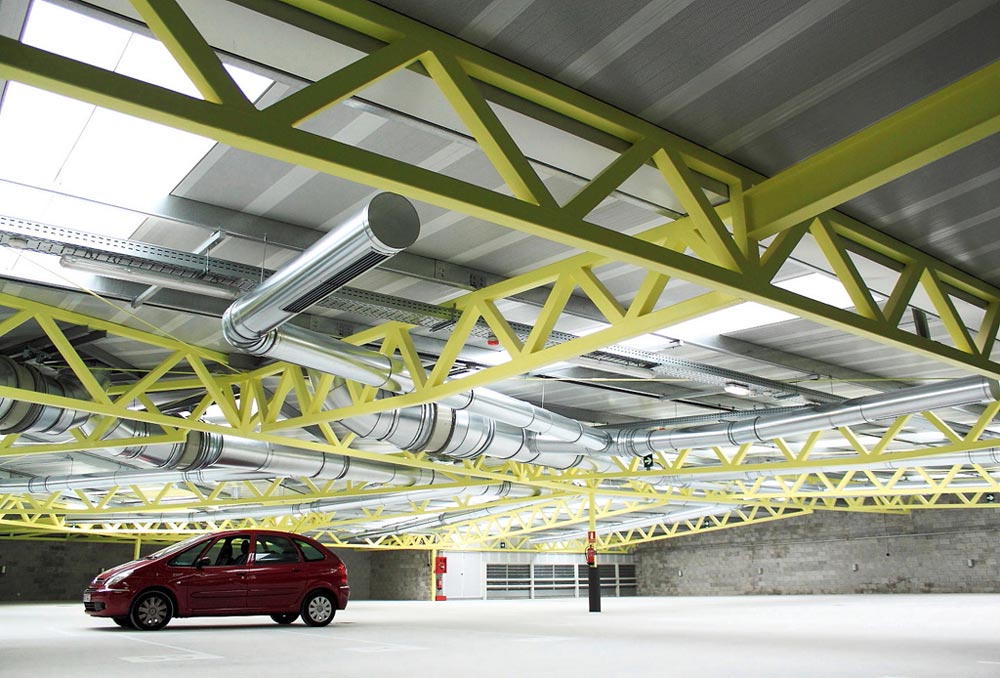 The bus station of El Carbonero of Oviedo was constructed in 1970. The building sheltered six plants of housings destined for the workers of the company in the top floors whereas in the plants it goes down and basement located the station. In the court of apple of the plot the docks were located.

When the station owner of the places stopped his activity in 2007, the El Carbonero S.A company  it decided to enable the same ones for his new use as public parking of rotation.

The project raises a few important restrictions of item: a plot with very irregular geometry, important acoustic limitations due to the existence of residential adjacent buildings, strict limitations of height defined in the urban development regulation and a limited budget of € 250/m2.. The geotechnical study defined the road surface to an average depth of 4m.

First there is defined a scheme of ideal distribution, fixing in 70 the minimal number of squares to considering in project, including two adapted squares, a minimum of 10 big, road squares of 5m and radioes of draft of 6m.

By means of the system of fenced planes there was defined the geometry of cover adapted to the irregular perimeter of the court, formed by 5 skirts of equal earrings of 7 % that were fulfilling the limits of height defined in the norm and construible were optimizing the maximum volume. The use of panel decides sándwich acoustic as materially of cover, with a percentage of polycarbonate defined by the acoustic study for the entry of natural light and the reduction of the electrical consumption.

In collaboration with Francisco Mena a metallic structure is designed for the support of cover formed by two structural levels of cerchas of pipe of steel, saving lights of up to 28m. The position of the only ones 11 props adapted to the distribution of the squares and to the geometry of the cover, creating a diaphanous and functional space. The quantity of used steel was of 14,5 Kg/m2, obtaining an approximate reduction of 30 % in the cost of the structure in relation with a conventional structure of girders and metallic props with lights of 7m.