In the fluvial walk of the Avia, to his go through Leiro, poses  the realisation of some aseos of public use in the glorious natural enclave of the Salgueiral, since it treats  of a zone with big tourist influx, as well as I happen forced of one of the routes of hiking. The basic premise of the intervention will be the integration with the nature, and the research  of a harmonic relation, but with some contrast between the piece to execute  and the outline. It tries   that this small edificación act like functional sculptural element, to the banks of the river Avia. 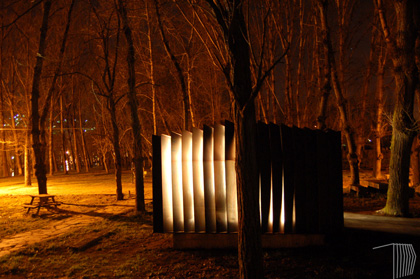 The challenge to the hour to schedule the execution, was to standardise the process of construction because of the reduced term of execution of two months. It scheduled  the realisation of the carcasa of steel cut in workshop simultaneously to the construction “in situ” of the testeros and the cimentación in armed concrete.

The factors that conditioned the location were the natural illumination, the soleamiento and the evacuation of the fluvial waters in case of growths, since the edificación  finds  in an area inundable. The permeable skin of the module of aseos, facilitates his bioclimatic operation.  It conceives  like an element prefabricated easily implantable,  because of the  existence of services of urban infrastructures.

keep  the trees of the outline, conserving even one situated in the slope of access to the aseos, by  what breaks  the piece of access.  It achieves  that the performance embrace to the tree, and that this pass to form part of the own building, to attain the integration in half.

treats  of the insertion of an infinitesimal element, in relation to a natural outline exuberante, and with a big verticalidad. Texture and geometry are allied to endow of some singularity to the intervention, in a game of uneven scales.

_Antivandalismo And absence of maintenance

The skin guarantees the security in front of vandalic acts. To way of armour, the coraza of compact annular elements separate, conjuga the permeabilidad and the resistance through the variable geometry. It opts  by finishings automantibles, like the steel cut, and walls of concrete seen treaties with resins epoxi transparent, hidrofugantes and antigraffitis.

The light will be a material more, studying in a bidirectional sense, from the inner to the outside and vice versa. The external light  tamiza, working the skin of the building like the foliage of the trees, that regulates his entrance. The inner illumination realised only with luminarias LED of low consumption, bathing the paramentos tangencialmente.  The nocturnal reading of the building is the one of an element torch that integrates  in the landscape of the Salgueiral, with the intersticios between the branchia to way of vertical threads of light.

The own skin of the module of aseos is permeable, ademáis  of autoportante, what facilitates his bioclimatic operation, since it ensures his natural ventilation, and the research of the soleamento, and the geometry in Z of each portico facilitates the collected and evacuation of the pluvial waters of natural form.

poses  the open branchia to facilitate the step of the waters of the river Avia. Tabiquería Inner separated of the soil and of the ceiling.

Game of lights and shadows with the disposal of the ribs portantes. The plegaduras regulate the permeabilidad to the light, to the water and to the step of the air. Sculptural piece in the middle of the forest, that solves a need in the place.

executes  all the envolvente by means of the use of pieces of sheet prayed in Z for training of the porticos. They mount  parallel rings with variations and folded variable  to facilitate the ventilation, the natural illumination and the evacuation of the waters. The confluencia of these factors and needs, derives in that the original prism of game  convirta in a polyhedral volume.

does not exist differentiation between closing and structure, working the skin like element of sustentación. The testeros will be walls of armed concrete, that arriostran the envolvente of steel avoiding his deformation.

executes  in the workshop the folded of the pieces that conform the different porticos, with variable guidelines according to  the needs of ventilation, soleamento and restriction of seen. The setting of the cascarón realises  in the workshop, in two groups of seven porticos, and a central portico of link. It will move  to the place and mount  by means of crane, what allows rapidity of setting.

Vision  from the another bank of the river,  by means of  the  game  with  pixels flown on pletina, as well as incorporation of the logo.