The ephemeral thing, in the architecture and in the life | Cristina García-Rosales

To speak about the ephemeral thing is to speak about our current reality. If we abide ourselves by his definition in the Dictionary of the Spanish Language, we state that ephemeral it is:

2. That has the duration of an alone day.

For what easily we deduce that the news that we follow for Internet and in any other way, is ephemeral. And that the messages that we throw in the social networks, also it are. We read them, try them to assimilate very rapidly (why has everything to be so rapid?) and we happen to the following one. Only we still have engraved that one that impresses us, which we surprise or thrill, which we share … To write (and to read) in a blog also to be able to be considered to be ephemeral, with the exception of some posts that can be read often, by the interest that they can wake up.

In any case, and speaking about the architecture is it possible to consider to be ephemeral? If the architecture is the “art of planning and constructing buildings”. And a building is a “construction fixes, done with resistant materials, for human room or for other uses”, it seemed that the fixed thing and the resistant thing should be lasting, to remain in the time, to age well and with dignity, to shelter the human being who lives it. That is to say, the opposite to the ephemeral thing. This way we learned it in the Schools of Architecture. This way our teachers have taught it to us…

But on the other hand, nowadays, one is speaking very much about “ephemeral architecture”. And though both terms are opposed, to my to deal, it is necessary to study thoroughly the question before throwing risky conclusions. The Wilkipedia clarifies it: the ephemeral architecture is the designed one habitually for celebrations and holidays of all kinds, as scenery or set for a concrete act, which dismounts after effected this one. That is to say, it is that one that is in use for exhibitions, fairs, emergency camps and in all those situations in which the disassembly and the temporality are necessary.

I refer, for example, to the public spaces in the city. And concretely, to the center of Madrid. If in the district squares and parks do not exist Center (and those who are assessed as green spaces, often are deprived or so called “hard” squares), the fact of occupying temporarily or ephemeral a lot, for recreation and playtime of the inhabitants of the zone, the public space that it generates, can it be considered to be an architecture? Clear that yes.

And if in a collective manifestation, since it was 15 M, if an architect designs a container based on palets of wood, with a bombproof imagination can it be considered to be an architecture? Also, certainly. On it Perea was saying:

“The architectural solutions were not answering to uses as ‘sleeping’ or ‘eating’, but to something more original: ‘meeting’. The threshold of the human relations is in this ceremony, is the origin of the collectivity”. 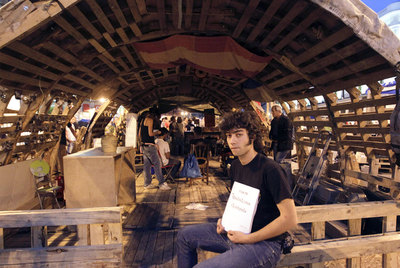 And what to say of the emergency situations where temporary constructions are needed for the persons who remain without home until more consistent others are constructed? These hard moments, the architecture, it does not have necessarily that to be beautiful, but effective and to provide cover to those that suffer from a critical moment.

Well then, I conclude that the ephemeral thing also is tied to the good architecture. And that exists providing that to put in fabric of judgment the received educations. That the useful thing is beautiful and that not always the beautiful thing, it is useful (it is not even necessary if it does him).