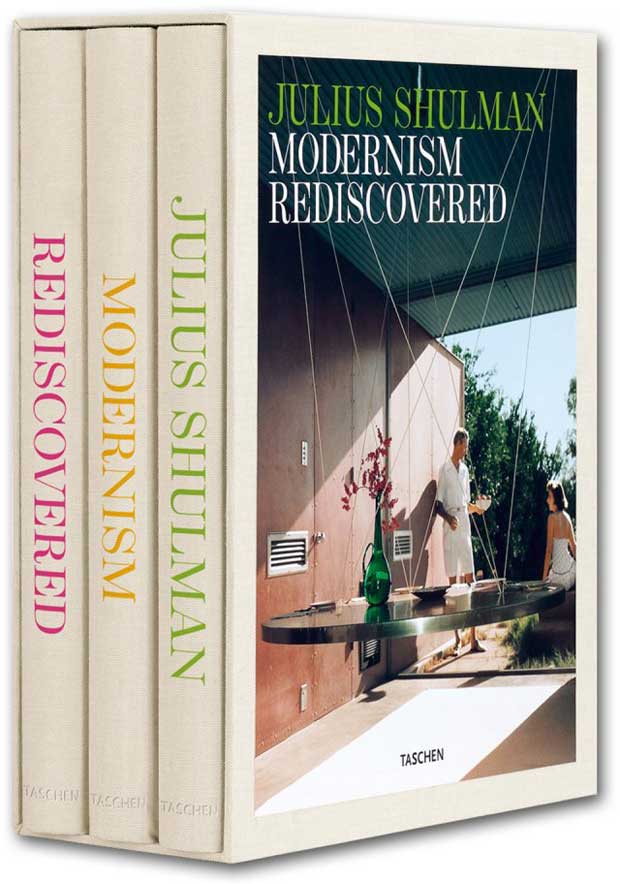 The Master of Modern. More discoveries from the Julius Shulman vaults.

TASCHEN’s Modernism Rediscovered (2000) brought to light for the first time forgotten architectural masterpieces, drawn from photographer Julius Shulman’s personal archives. Paying tribute to residential and commercial buildings that had slipped from public view, Shulman`s stunning photographs uncovered a rarely seen side of California Modernism. This extensive, three-volume follow-up to that remarkable volume brings over 400 more architectural gems into the spotlight. Not just restricted to the West Coast this time, the images were taken all across the United States as well as in Mexico, Israel, and Hong Kong.

Each project and photograph in these volumes was personally selected from over 260,000 photographs over a two-year period by publisher Benedikt Taschen, who has enjoyed a close collaboration with the photographer since first publishing Julius Shulman: Architecture and Its Photography (1998). Augmenting the photographs are an introduction by photography critic Owen Edwards, an extensive biography by University of Southern California historian Philip J. Ethington, captions on decorative elements by Los Angeles Modern Auctions founder Peter Loughrey, biographies of key architects, and personal reflections from the photographer himself. Arts writer Hunter Drohojowska-Philp conducted months of interviews with Shulman to construct an informative and lively oral history and portrait of the times.

Julius Shulman’s photography was instrumental in crafting the image of the midcentury Southern California lifestyle across the United States and around the world. His work keenly identifies the distinctive structural, functional, and design elements of a building, in the context of both its natural surroundings and the people who occupy the spaces. This sensitivity, combined with his intuitive and brilliant sense of composition and timing, has earned him the reputation as a master of the genre. How fortunate we are that Shulman has once again opened his archives so that we may rediscover his photographs of the world’s hidden Modernist treasures.

The artist:
A resident of Los Angeles since 1920, Julius Shulman documented modernist architecture in Southern California and across the globe for nearly eight decades. His images of Pierre Koenig’s Case Study House No. 22 (1960) in Los Angeles and Richard J. Neutra’s Kaufmann House (1947) in Palm Springs are among the most recognizable and iconic architectural photographs of the 20th century. Shulman’s interest in photography developed into a career when he photographed Neutra’s Kun Residence in Los Angeles with his Kodak Vestpocket camera in 1936. Neutra admired young Shulman’s images and continued to commission his work. Other leading architects of the time followed suit, as did hundreds of magazines, newspapers, and book publishers. Shulman’s numerous awards include the Architectural Photography Medal from the American Institute of Architects (1969), a lifetime achievement award from the International Center of Photography in New York (1998), and honorary doctorates from various academic institutions. He died on July 15, 2009 at the age of 98.

The authors:
Hunter Drohojowska-Philp writes about modern art, design and architecture. She is a regular contributor to Artnews, Artnet, Western Interiors and Design, and the Los Angeles Times and the author of Full Bloom: The Art and Life of Georgia O’Keeffe.

Philip J. Ethington is Professor of History and Political Science at the University of Southern California and North American Editor of the journal Urban History. He is currently completing a large-format graphic book and online publication called Ghost Metropolis, Los Angeles, 1542–2001.