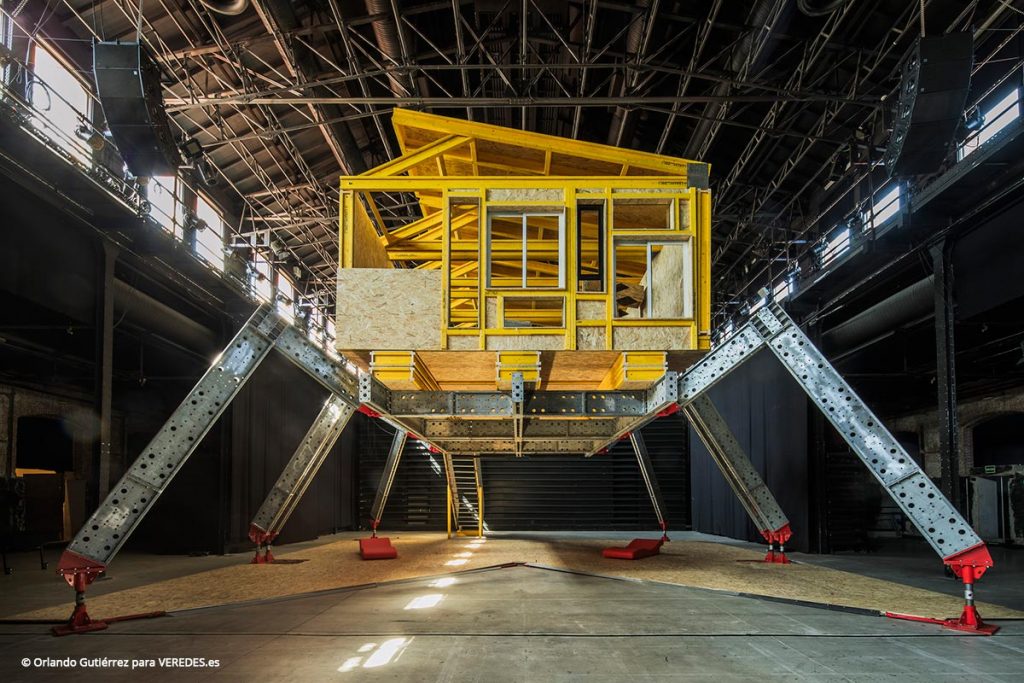 Inhabit the air is the name of this project that includes the construction of a house inside Nave 11, various actions and social and artistic interventions, a house planned by the Sevillian architect Santiago Cirugeda. The house has been built in collaboration with various associations of women, architecture students and volunteers, directed and trained by the Urban Recipes team (with extensive experience in collective self-construction).

“The development of the project began with the search, purchase and storage of materials. We have built a house, in the air, elevated, to find ourselves in an even stranger situation, where there are no tenants or landlords, where their hourly use intensifies, where you have to find a way to live it”, Cirugeda explains.

The Sevillian architect, who will be present at Art Basel with a large audience that will be built collaboratively, puts the construction within reach of the whole world and seeks the alegalidad of the institutional system to allow that the constructions have a social purpose from which they can benefit Their creators.

In this case, the house will be built, in addition to architecture students of the Polytechnic University of Madrid, by women members of the Network of Feminist Women for Gender Equity in Development; Amalgama Association, of Latin American women who fight against gender violence; and Dinamia Cooperative and Trabe Foundation, specialized in integration processes. The three women’s associations are already looking for a place in Madrid where to rebuild the house after its use in Slaughterhouses to be used as social headquarters of each of them. The project is considered as an itinerant process and the house will be rebuilt in different places to be used by all the groups involved.

The design of the interior space and the furniture have been made by the students of the Artediez public school for which they have taken into account the future use of the house.

Music in the air.

During the month of June and sharing space with the construction of Santiago Cirugeda, the Nave 11 will host concerts such as the recital from sun to sun that will offer the musical composer, instrumentalist and musicologist Llorenç Barber, along with the singer and ethnomusicologist Montserrat Palacios. The concert, which will take place on June 9, will begin at nightfall and last all morning until the sun comes up again. Barber, an internationally renowned artist who walks in the forefront of sound art in Spain, has already launched this experience, since the 90s, in cities such as Rome, Berlin or Seville. In addition, it will offer small impromptu recitals in the house on June 8 at the opening hours of the house, from 5:00 pm to 8:00 pm.

Also the pianist Ignacio Marín Bocanegra will give two concerts on June 15 and 16. This professor of piano at the Royal Conservatory of Music of Madrid has been trained at the Julliard School in New York, he has performed at Lincoln Center (New York) and with the National Chamber Orchestra, the Virtuosos of Moscow or the Symphony Orchestra of Sofia, among others.

For its part, the Vértebro group will close the facility with a community performance of 12 hours,

“a temporary paradise where to gather all our totems and exploit them”, the collective explains.

The Madrugá will be on June 29 from 12 at night to 12 in the morning. Ángela López, Juan Diego Calzada and Nazario Díaz are members of this group based in Córdoba where they would curate Beautiful Movers, a meeting for the contemporary scene where creators such as Rodrigo García, Patricia Caballero and Pilar Albarracín have passed.

Reading club and workshops for teenagers.

The house inside Nave 11 will also be occupied by the artistic collective Los Bárbaros. His work addresses concepts around identity, power and community. It flows from the everyday to the unexpected and poetic, focusing on honesty and trying to create spaces for dialogue and questioning. Directed by Javier Hernando and Miguel Rojo, it fluctuates between the theatrical space and that of the museum. He has produced works both in Spain (at CA2M, La Casa Encendida or Thyssen-Bornemisza National Museum, among others) and abroad (England, France and Portugal).

The house will become for them a place of resistance in which they will carry out a piece-workshop that will take shape thanks to work sessions with almost one hundred adolescents from different associations of INJUCAM (federation of associations for the promotion of childhood and youth of the Community of Madrid).

And they will also set up a reading club in which young people from INJUCAM, Provivienda associations, Ruminahui Association, Alamedillas Association and Asociación Barro Proyecto Jara will participate.