The following project has been developed in a human settlement in the district of Ventanilla in Lima, one of the poorest areas of the city, where people still do not have basic services such as roads, lighting in the streets, public transport.

When we arrived at the place, we realized that the infrastructure in which they lived had been made by parts, with different materials such as mats, triplay, wooden plates, plastic. The interior was totally dark, it did not have windows, the roof was patched with different wavy plates, that due to its bad installation, water leaks were a serious problem in the winter. And so this model was 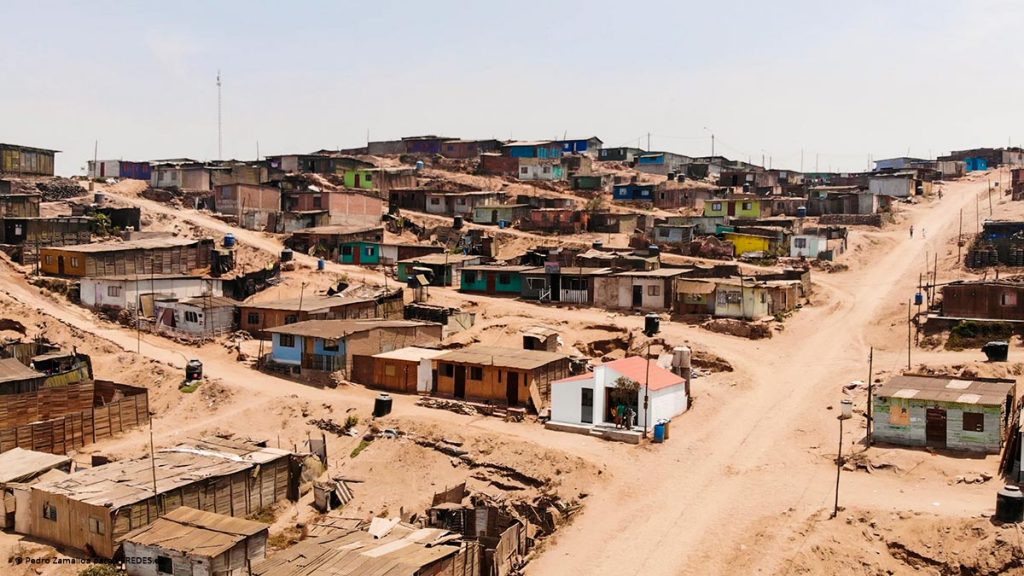 The project was worked from 3 stages:

Stage 1, Reclamation yards. Everything that existed was removed and removed, which allowed the family to recycle the materials and sell them in parts. This is born from the research we carried out for a project developed in 2015, about the reclamation yards, which basically tries to make the demolition or cutting process of a building (which is highly polluting) sustainable, dismantling it in parts and selling it, so that then all this may belong to another building or use.

Stage 2. Execution of the project. The new house has an area of 42 m2, was a work that was developed in conversation with the family, where before the construction, they could see the plans, the model of the house, and how would your future home. One of the important requirements on the part of the clients was to maintain the tree in the entrance, due to the few green areas existing in the place. The project was developed with screens that open onto a terrace, facing west, allowing the entry of fresh air, and two teatinas were designed in the upper part of the house, which by injection, the hot air would rise and the house would be ventilated during the summer. These theatinas are oriented towards the north, which allows a diffuse illumination during the whole day, allowing them to save on the electrical cost.

Stage 3. Donation of equipment. Through Fundación Marte, we made a call for donations from a video, in which we requested elements that can help to equip the house, such as the bed, the kitchen, the pots, chairs, tables, quilts, blender, etc.

The call was a success, because in two days we managed to get everything needed for the house, thanks to the donation of only 3 families (despite the dozens who wrote us to donate), this was a very big saving for the client, since prior to this, the client was managing a loan to be able to equip his house.

For us it is a joy to see the house finished, because for years we have been investigating how to do to improve the quality of life of people with design, at low cost and even more in human settlements, where it is super difficult to arrive. The architecture is for everyone and it has become clear to us that with little you can do much.

Starting is a great step, although along the way, we will continue to encounter many difficulties, the important thing will be to continue and as designers improve the quality of life of people.