An only element generates the spaces, communicating them and dividing them, giving service. It is it everything, and is not at all… A piece of furniture, a line. 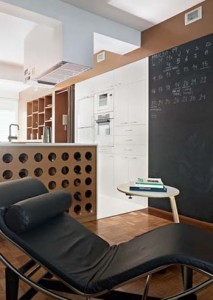 The flat to reform was a classical distribution of the years 60-70, in which all organised  around a corridor, around the cual went  sucediendo the stays. The corridor that joined the two current entrances (in that moment there was not elevator, by what only existed the one of the stairs) shut the bathroom to one of his sides, and to the another would have  four rooms, two of them Italian, that would be those that correspond in the actuality when being-kitchen-canteen. In the corner south, the most move# away room, found  the kitchen. In general the flat found  in very bad state, with carpentries very dilapidated, pavimentos desconchados and obsolete installations. The only that conserved  was the pavimento wooden in damero of the two Italian rooms that had repaired  a year before. However, although little it could  conserve of the house, presented some optimum characteristics to be able to modify the space. First, the structure of beams of wall medianero to wall medianero, with an intermediate support in the playground and the core of stairs, allowed to free the plant and have the spaces of a more versatile form. But another, when being the highest flat, also, allowed to modify the exits of the installations to suitability to the not having to assume pipes of flats higher. With everything, the main conditioning that foresaw  in the project was the future placing of the elevator by the playground of lights that went to generate in the house a double access, in two opposite points of the house, with the complication of routes that this involved.

The main aim of the project was to find a disposal of pieces that assumed the double entrance of a natural form, and that did not generate dead circulations or stray space, already the scarce surface of the flat (78 m2 once freed of septums), demanded an effort of aprovechamiento. One of the main problems of the houses of scarce surface is to guarantee a storage with forecasts of future, understanding that over time, the houses go  filling of things, and this done could not suppose a problem. It says  that the architecture is to take advantage of the opportunities that present us his conditions of game. Here, the conditionings of the two entrances especially, and the surface limited generated the project. The research of cleaning, to resolve the problems with the minimum possible, generated a gesture, an only stroke in the plane that resolved the spaces. This gesture is a piece, understood like piece of furniture, a discontinuous line that resolved everything.

On the one hand, the double entada resolved  doing that both arrived to a common space that crosses the house of north to south, generating a longitudinal space to be-canteen-cooks continuous. This awarded him to this space all the leadership of the house, since it would serve like zone to be, zone of movement and zone of activity. Somehow, the space represents the modern life in which every time it is more difficult differentiate some things of others, where all mixes  and where the separation of functions begins to lose sense since these  entremezclan. And somehow also it represented the traditional Galician home where the kitchen chaired the space, and turned into the place to be and live, leaving the living room like a stay for the visits. Here, this representative space does not exist; use and representation turn into one.

This intention of space motivated also the criteria of amueblamiento of the house. Like this, understanding the space like open, mobile and free, caused that all the furniture (to exception of the sofa and the table of the canteen) have wheels, facilitating like this the movement of these and the configuration of the space of multiple ways, allowing a main versatilidad of the available space. The rest of the house, organises  of a logical form in function of this decision to cross the house with an only space. Like this, they situate  two bedrooms in the extremes, and a bathroom and a zone of wash between them. These two pieces understand  also like places of step or of secondary circulation. This went  splitting and separating by means of sliding doors that went out of the central piece of furniture.

The distribution of the spaces of this form was conditioning the distribution of the piece of furniture central server. Like this, this piece of furniture of 1.05 m of width goes serving to a side and to another. Cupboards to the bedrooms; shelvings to the common space; storage, fridge and column of oven and microwaves to the kitchen; washing machine, dryer, boiler and shoemaker to the lavandería, etc. Little by little, and after a work of lace went  taking advantage of each recoveco of this piece of furniture so that it gave the main service to the space that surrounds it. Of this form, the house, would work without the need to include too many pieces of furniture, and the resultant space presented  like open, free and useful. In fact, this piece of furniture does not arrive to the extremes of the house, to strengthen his independence generating in these points another entrance to the bedrooms that separate  of the common space by means of a door of double leaf that generates an attractive game of independence and of lights and shadows.

Like this, the 78 m2 initiate them turned into 68 m2 useful, but resolved in them all the service of the house and the distribution. Taking into account that in a normal house, the difference between surface built and the useful surface is of 12%, here, resolves  in 13% of the surface the distribution and the storage. The central piece of furniture contains it everything to way of Swiss razor, and assumes the distribution of the spaces, the storage, the doors, the illumination, the installations…

Only it remained the kitchen, that as I mentioned previously, although in some versions tried  incorporate to the central piece of furniture, purchased at the end an essential leadership, splitting the space in two zones around her, but without a direccionalidad marked, like this the rest could use  for a thing or for the contrary. The decision to conserve the soil of the Italian rooms, generated also another opportunity to the hour of the update of the installations. To the not being able to touch this soil, all the installations carried  by the rear part of the piece of furniture. For this went down  the ceiling of this zone, and allowed that they appeared some maleteros high in the rooms that improved the storage of the house. It Tubes of the heating went past  of the cupboards, with the intention that these heated the soil in these zones and generated a confort extra in winter to the hour to dress  and desvestirse, anyway, all was squaring to do of the reform an only solid element. The intention to generate the house with the main possible cleaning went  achieving little by little, finding the appropriate piece of the puzle in each moment.

The reform realised  of some scarce three months. The cleaning of the proposal, facilitated the construction, since practically, treated  of demoler the existent septums, and build the central piece of furniture. The rest was already a work of finishings and painting. The only elements of the perimeter that touched  were the façades that  revistieron of a tabiquería light of plaster to increase the isolation of the house, and carry the radiadores to his logical position. Besides they changed  the carpentries by one oscillate-batientes with break of thermal bridge.

Regarding the materials and revestimientos, to the equal that in the distribution, tried  employ the minimum possible elements. The piece of furniture realised  in wood of DM glazed. This wood, in addition to presenting a very affordable price, allows to leave the singings seen when being a compact material, and facilitating the construction.

Of this piece of furniture go out two ‘white tongues’ that incorporate in him the humid zones of the house. Like this the kitchen and the bathroom deploy  of the piece of furniture like some flat white fractions. It employed  the ‘Silestone’ as material for the encimera, the pileta of the bathroom, as well as in the soils of both spaces, achieving like this a pavimento continuous without any board. A curiosity that is used to to call the attention is the plate of induction of kitchen of white colour of the mark ‘Of Dietrich’.

The rest, white painting, green linoleum in the rooms, felpudos of coconut in the zones of entrance delimiting the thickness of the piece of furniture and tablones wooden to cover the gaps left by the septums between the pavimentos of damero that conserved . These tablones coincide with the projection of the beams of singing that pautan the space, are therefore the reproduction in the soil of these.

The conservation of this soil, in addition to some economic conditionings, had the charm to conserve as you trace, like fossils, the ancient distribution of the house. Somehow they represent the intentions of the house, to clean the space of septums and place a piece of furniture, the minimum necessary to give him form to the new house. Therefore, conserve the pavimento strengthened this attitude to do the minimum.

Besides they incorporate  some details that give him life to the group as it is a blackboard attaches to the kitchen or like the revestimiento of the bell with sheet of steel, that with magnets, turns into a zone of photos, notes, recuerdos, etc. Also incorporated  a botellero integrated to one of the sides of the plateau of kitchen, in definite, details that enrich the space and the design.

The illumination does not do another thing that try add efforts to these spaces created. Like this, in the living room lights  indirectly all the lateral wall, strengthening the idea of continuity. In the rooms plafones of surface opales, centred in the ceiling and ‘linestras’ to light the cupboards… anyway, in general, an illumination supeditada to the use without any leadership, without wanting to generate any effect neither generate any quality that no present the space by himself same. In fact all the luminarias are basically light. Pieces opales clean without elements superfluos.

As it indicates  further up, the furniture looks for also a freedom that allowed to change the space without difficulty and that strengthened the idea of only space without function preestablecida, being able to change the zone to eat by a dispatch, or the zone to be by the one to eat (in fact has gone  changing over time and with the circumstances, as it is the the increase of the family when having the couple a son… with all what this involves). Thus, they designed  pieces of furniture with wheels and without direccionalidad marked. They are pieces of furniture that can employ  from several sides, being able to be surrounded, without rear neither fronts.

I trust that a suitable balance between the means and the ends, an aprovechamiento of the opportunities or of the restrictions, and a logical development of all this, guarantee a quality. Of not being like this, what lost would be! New conditions generate new spaces; new people generate new spaces. The house has changed to adapt  to them. But I do not know if it has improved like space in himself same, simply is another….This yes, new.

Work: it Reforms house in street San Diego. A Coruña