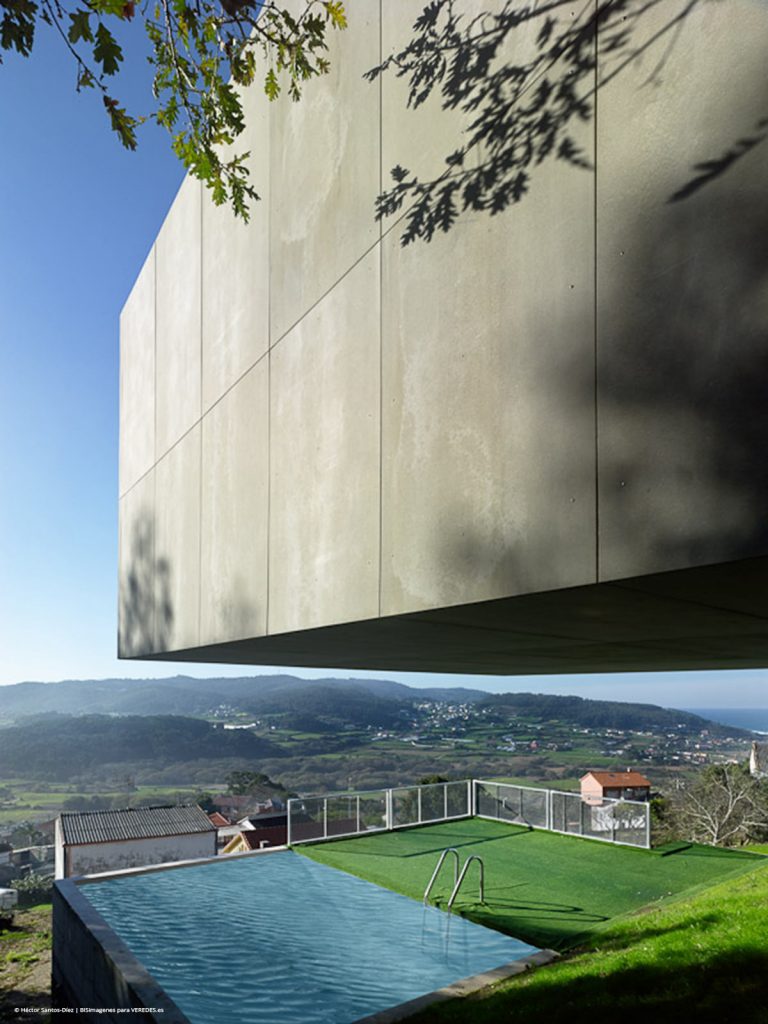 The Angra mount is the geological set that believes in his south slope one of the faces of Barrañán’s raspberry. Bathed by the predominant winds come from the Atlantic Ocean it has like proved a set of rocky rich formations in quartz that they coexist with a dense and low vegetation. Between the skirt of the Angra mount and Barrañán’s raspberry locates our plot …. In the limit between the churlish mountain and the sweet raspberry.

Seixos 3.0 arises as the birth of a new rocky formation of sharp edges that still have not been eroded by the wind, an indeterminate system in the set of the hillside of the mount Cove, the generation of a new fabric and a new own local skin, in occasions permeable, in others impregnable. A hybrid between the land and the sky…

“As a rocky formation, our offer arises from the land, slipping for the hillside between the vegetation, in an irregular way permitting in occasions to spy the valley in all his brilliance. In other occasions the partial and slanted vision offers us new perspectives that arise between the rocks … and in a punctual way, the highest cover rises looking for the sky with the zeal to hide the constructions realized by the man that appear in the first plane, trying to restore that one that the nature had decided.”

A small interior disclosed court raises inside the rock vertebrando the zones by day, and relating the spaces of being – comedor-cocina with the spaces of infantile game, which place in the deepest of the seixos and which contain another box of wood where facilities and quarters of laundry are illuminated by the interior court, coming the light up to the same entrails of the rock.

Finally, the third seixo separated from the housing; much more synthetic; a diaphanous space for multiple uses that it shelters different spaces of storage and on which there appears a zone of exterior use consisted of a swimming pool of overflowing type and a solaina that for his situation and orientation allows that they could take advantage of the exterior spaces so that shades do not throw themselves on the zones of use staying the latter integrated the set of the architectural offer.

Seixo 3.0 goes deeply into the idea of the “primitive thing”, into the search of the original thing, of the rock into the hillside of the mountain, of the sharp seixo…, giving like proved a synthetic volume, of cold walls of concrete and viroc that will resist the passage of time. In contraposition, when we enter the entrails of the rock, there arises the cabin, much more light, that returns to the clear one in the forest. An intermediate architecture between the natural thing and the artificial thing…

The hot boxes of wood of pine balsay arise in conversation with the walls of concrete that cross the housing the exterior perron gives step to the dais of pine lofoten, whose clear tones allow that it should slip by and that the reflection of the light in his surface is the real protagonist of the housing, almost as a solar clock in whose tonalities and shades reproduce the different hours of the day.