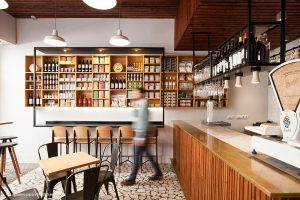 
In Seville since there was eliminating the Regina Cinema, thela Droguería Isan, the Camilo’s shoe store, Garrido Furniture or Casa Noval Home, 20 years have happened.

Since in the hapkido, the hwa or beginning of not resistance, there enunciates the need not to be opposed by force, not to the energy of the adversary, but to be done by her to use it in own benefit. Beyond absent adversaries, Lugadero raises a project for Salsamento who, from the honesty and the recognition to those that left here his fingerprints, inherits an efficient distribution, two pavements, a ruled ceiling, a great camouflaged door and a bar of brass.

A bar without kitchen, with winks to the classic hotel and catering business, to the colmao, to the abacería … to He Marries Lard, to Trifón, to the Bodeguita Morales, to House Dark man, to Gaviño, to San Rafael, or to the Rinconcillo, but with a modern spirit. Salsamento lands in one of the areas of the Sevillian capital with major growth in the last years, Regina treats himself about the zone of “The Mushrooms” of the Incarnation and his expansion towards the street, to form a part of his life of neighborhood with an authentic and specialized offer. Tied to a gastronomic culture of long tradition as the Sevillian one, Salsamento appears under a format of urban pantry in the downtown.

Both in the creation of the brand and in the interiorismo, Lugadero’s principal aim was to reflect the philosophy of his promoter, emphasizing values as functionality, cleanliness and naturalness. Departing from the concept ” shop of the corner “, Salsamento’s universe is solved from a neutral and discreet brand. The elegant selection of the products and a nearby service they are reflected in his graphical development and in his interior design, where every application, from the menu up to the brown paper, fulfills a concrete function that complements this integral project.

The design of the brand and of the place they raise therefore in an only, indissoluble way, from the reintepretation of the traditional elements of the classic abacerías, from the products that they are in the habit of finding, up to the experience of purchase and the narrow relation between waiter and client. Under a graphical contemporary language shaped by clean and simple lines, all the applications for the brand have been formulated under the concept of functionality, using natural materials, doing emphasis in the name..

Salsamento tries to transmit scenes of bar of the whole life of a current and elegant form. Occupying the one that was an urban access to the missing person Cine Regina, this one ultramarine bar gathers his tradition of the street that was, with the utilization of traditional hexagonal tiles that extend towards his interior Jerónimo Hernández’s sidewalk. After this anteroom, the inherited pavement realized from irregular pieces of marble, it does constant winks to the Portuguese calçada.

The project this one divided in 4 principal areas: the mentioned interior sidewalk, her lateral bars of degustation and sale, the zone of low tables and the bar or principal “altar”. The integration of a new made-to-measure furniture designed by Lugadero, with the use of relating pieces of the industrial design like those of Jean Prouvé or Xavier Pauchard, represents a balance sheet of elements that do of Salsamento a balanced and sober space, in which the placement of the products and his extensive chromatic range generates showy contrasts.

A nice place, which fingerprints remain in a ceiling modulated by a reticle of industrial lamps, and it conforms from muds of wood, which contribute comfort at the time that they solve acoustic this space opened for the street. The use of wood and hot lights they provide to the interior of a cozy atmosphere, at the time that it is allowed that they should communicate the values of the brand of direct form, emphasizing, first of all, the products and his chance nature. The reference of elements as the rescued familiar scale, with more than one century, or the showcase of cheeses, they form a part of Salsamento’s “altar”. From the bottom, like slate, a sliding door conceals the bathroom and announces in a dynamic way each and every of the products that offer.

In the center of the place, there are located the low tables, on which it is possible to taste the variety of products that Salsamento offers in his racks. A few racks designed to happen unnoticed, that talk with the lateral bars in structure of steel and that grant all the protagonism to the worn products of the Iberian Peninsula, from Portuguese tins to Extremaduran spiced pork sausages, spending for Asturian cheeses or a selection Catalan wines. His commitment with the proximity, does that a high percentage of these products is Andalusian, emphasizing the bet for the generous natives of Jerez de la Frontera or Barbate’s exquisite conserves.

The result of mixing the classic scene of a shop of ultramarine with graphical modern elements inside a relaxed environment and good treatment, is Salsamento. be served you itself.