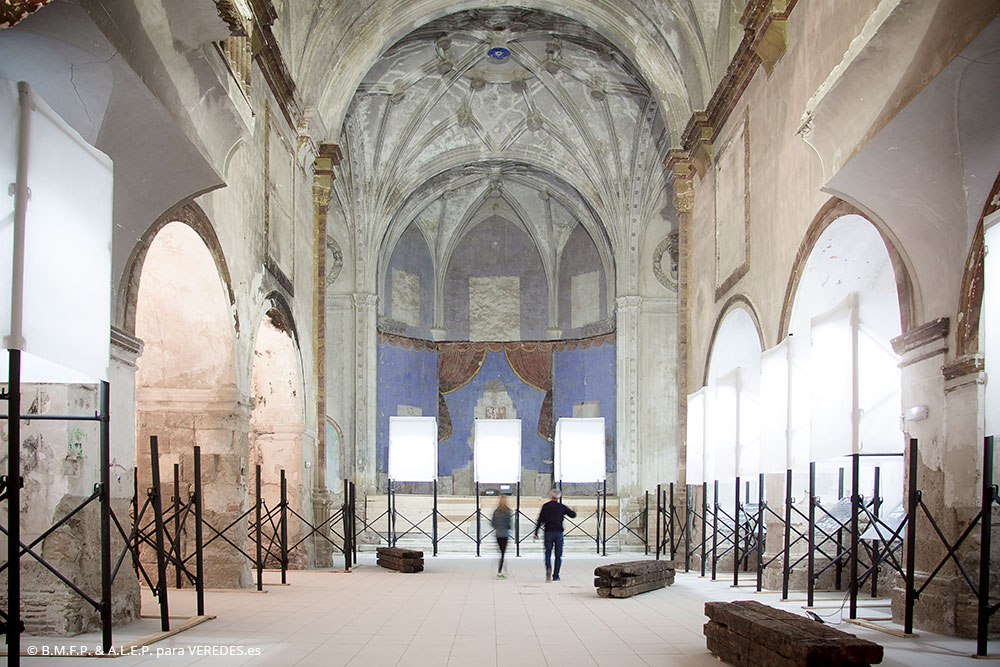 The project is an assembly of scaffoldings, in San Jerónimo in baza former church, which they work as support for exhibitions and protection of the coatings, which are not treated still (only it could have carried out the first phase of the rehabilitation, of which we were taking the direction of work in the study).

The idea arises on having dismantled the system of obsolete scaffoldings that were supporting the vaults of the cruise and apse, during the work.

The panels that are exposed now, treat on the own constructive process of the first phase (works and covered of structural stabilization) and also we have done them in the study. The idea is that everything was “Low cost” the materials are recycled and everything has carried out for the collaboration of the Town hall Advantage, Meeting of Andalusia, and the construction one of the work OTERO.

Our intention on having done this assembly, was that the place was remaining a bit an interesting mas to mount activities inside, since now the church belongs to the town hall of Advantage and we understand it as a great covered square.

To the beginning of the work we dismantle the scaffoldings that were holding the cruise from about decades and we realized that we had very much materially in power that was going to sell at the scrap metal dealer since they were descatalogados, and on the other hand it was giving us great a sorrow not to be able to show the work developed in the covers of the church to the whole people of Advantage, for what we proposed to the Town hall of Advantage to mount an exhibition of 10 plans that were explaining the whole realized work, using like support the scaffoldings that already we had, in turn in we recycle the naughty ancient some that were in disuse to form banks of rest.

The intervention will remain there until the second phase of the work is realized, and adecue the space for a cultural center, meanwhile the visitors remain protected from small detachments of the walls and there has been created a support and lighting adapted for many types of public events.