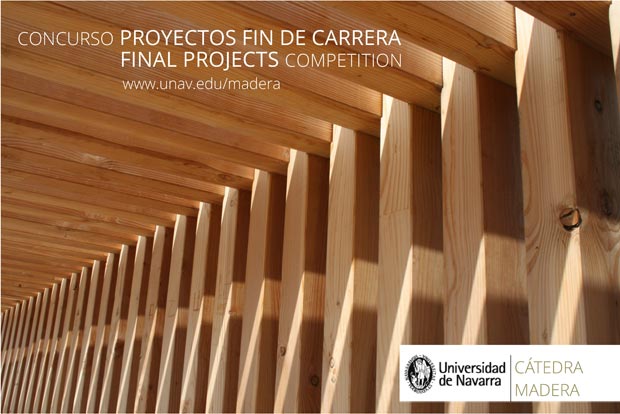 It´s Opened the term of the Edition 3th PFC Cátedra Madera Contest , which rewards the project end of career (PFC) that for his quality, innovation, originality or creativity highlights the utilization of wood and aspects of sustainability in an architectural project.

The School of Architecture of the University of Navarre, together with the Chair Madeira, promotes this international contest in which the project rewards end of career (PFC) that, for his quality, innovation, originality or creativity, projection the utilization of wood and the aspects of sustainability inside an architectural project.

Reward. It consists of the concession of a scholarship that covers the cost of the matriculation in the Máster in Design and Environmental Management of Buildings that is given in the School of Architecture of the University of Navarre (Spain).

Participants. There will be able to appear those persons who have presented his PFC in any School of Architecture recognized officially between September, 2012 and February, 2015.