Networks it is a small Seaworthy Villa of beginning of the 20th century, placed in the north margin of her Laugh of Plough nailed in the Galician Northern coast of Galicia. This locality was rewarded by the Architects’ College in the international day of the architecture 2009 for preserving his original trace in the urbanism. Also this locality is known as the ” Galician Venice ” by the connection of his housings to the sea. In the street known as Rúa Nova that constitutes an extension of the people of the 40s destined to housings and warehouses both one-family housings place with the numbers 42 and 44 that nowadays unify the functions of housing and study of architecture. 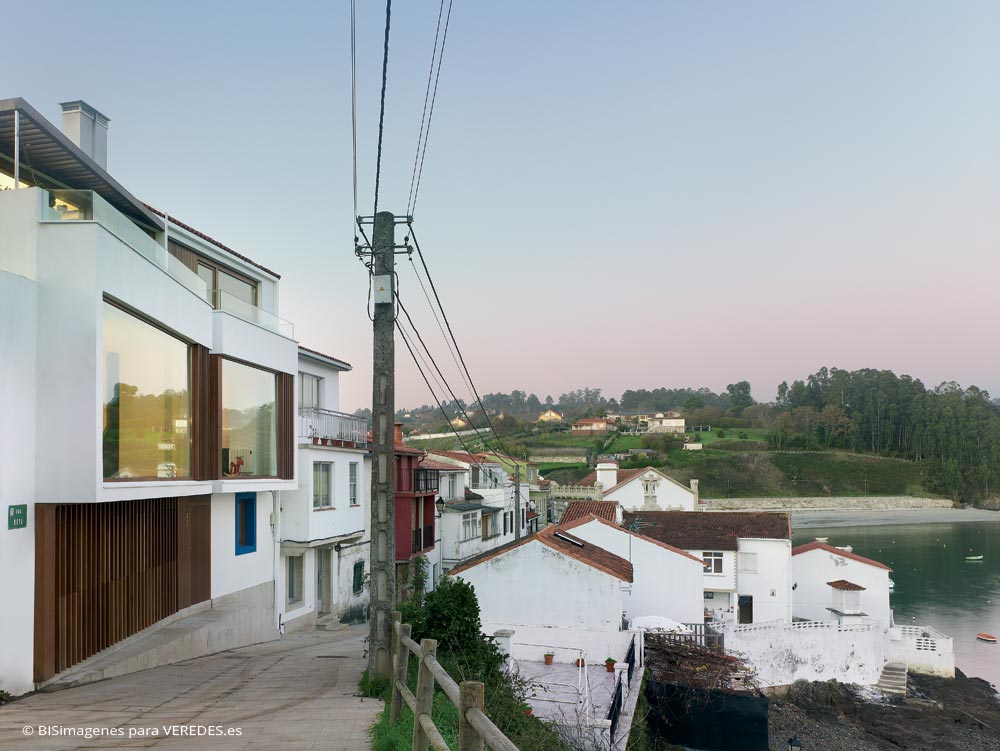 The project supposes the rehabilitation and extension of two one-family existing housings that were not preserving the traditional configuration of the urban core of Networks, due to a rehabilitation suffered in the 80s. To recover this traditional architecture of the seaworthy villa by means of a contemporary language, a reintepretation of the same one was done, using materials as the wood of Iroko, the girders of laminated wood, the tile curls or the white mortar.

The housings arrange in a symmetrical way on the dividing wall of original stone. These develop in three levels the first level from the waterfront in the Rúa Nova with the principal hall, two stays and a bath. In the first plant the lounge designs dining room and the kitchen, everything the plant linked to a back garden and with a gallery in flight with a view to her Laugh. In the second plant two bedrooms and two baths develop.

The stairs on having placed in the center of the housing were designed by a sculptural value and they change from the ground floor up to the second one. In the ground floor they are massive in oak with a great cupboard in his interior, in the first plant they are metallic and very diaphanous and identical with white to allow the transparency of the plant.

In the garden they arrange different botanical autochthonous species, one believes a terrace of wood of Iroko, a closing mud of wood of Iroko that allow frontal conference to the mount and are closed the neighbors count in the party walls. Crossing the Rúa Nova it is possible to lower for a few stairs a murete of granite called I carry Radeiro, partly property of the housings. Pulling an end a Dorna approaches, traditional Galician craft, which constitutes the system of principal transport of the housings for them Dorna.

Between the furniture it is necessary to emphasize the chimney designed by Michael Mila for DAE, the sanitary ones of David Chipperfield’s selection for Rock, the chairs of loneta orange Natives of Minorca, and the sofas of the lounge are designed by Díaz and Díaz Arquitectos and prepare in several modules to be able to create a central table or an enormous bed, as well as a space of meeting concerning the chimney.