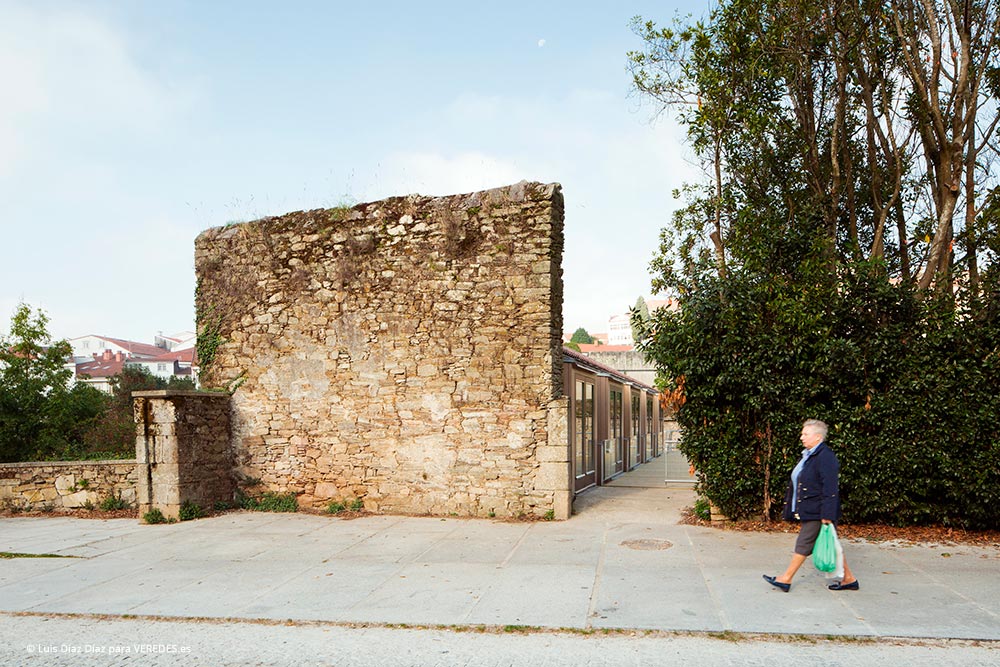 The order was centring on the rehabilitation of a former dry that was forming a part of a tannery placed in the areas of Belvís’s current park. It was a question of solving a cultural equipment with a very opened program; the intervention was seeking to put in value a catalogued building having multifunctional spaces for exhibitions, meetings, rooms of concerts, projections, etc. Likewise the bathroom had to serve to the park.

The intervention in Belvís’s park had incorporated the vestiges of diverse buildings and of the walls that were delimiting gardens, ways, recats, etc. As elements estructuradores of the same one. In the historical planes there is verified that originally the building and the plot placed to the north of this one were forming a “isolated” unit and that the level of the area in this (north) front was supporting the exterior face of the wall in ground floor to the overdraft.

Of the original building there were staying the walls of masonry protected by a provisional cover, to a water, of plates of fibrocemento waved. The adjacent area had been modified to the north front in order to solve the necessary traffics. The closing masonry that was continuing the south front had been demolished partially and also the auction of the north front; both had been stabilized and crowned with granitic masonry. In the limit west had eliminated the original closing, and in his place they had constructed a partition of factory of brick. The big hollows of the north front, typical of this type of buildings for strategies of ventilation, also were blocked.

The offer recovers the volume of the original cover, to two waters, resting on the traces that were marking the flagstones that were solving the meeting of the same one with the wall testero. It does not manage to reconstruct the complete volume, emphasizing this way the character of unfinished piece opened for the park. For the levels of floor there are adopted like valid those who mark the original accesses and the fingerprints of support of the structure of floor.

The original topography recovers, partly, in the north front in order to facilitate, now, the accessibility and the habitability of the building. The hollows blocked of this front are occupied, in the new project, by a few boxes of wood that are projected towards the exterior. To these one accedes from a platform that one installs as a viewing-point inside the park. This disposition allows a permeability that establishes a direct relation of the building with the exterior and suggests diverse possibilities of use.

In the limit west rejects the option to reconstruct or complete the granitic factory. A closing of wood and glass receives the stairs, a great glazed hollow in high plant and the access of ground floor. These elements are organized in different planes supporting the sensation of unfinished construction and emphasizing his permeability and direccionalidad.

In the interior, the different types of wood, together with the absorbent panels of the ceilings and those of shavings orientated of the boxes they appear under an order that answers to his dimensions and to the character seriado of the building.

The disposition of the stairs in the plant closed at a height of the first section, and the solution of the wrought interval that solves the thermal and acoustic isolation, they facilitate the possibility of a functioning independent from both plants.

The whole horizontal structure solves with pieces of wood supported on the existing walls that, in the north front, arriostran by means of metallic elements. Both in the floor and in cover there is looked that an alone structural modulated order solves the whole surface.  For the cover it has been chosen for a structure at par – row that it rests on stirrups of wood tightened with metallic elements. For the floor there has been projected a mixed structure of wood and concrete, so that we obtain a sufficient inflexibility bearing in mind that the overload corresponds with a building of public concurrence. Likewise, in both cases, one has chosen to place a plate of shavings of wood and mortar enrasada with the low face of the escuadrías isolating with rock wool in the space between this ceiling and the board of the top face. With this solution, beside solving the thermal and acoustic isolation, we solve the protection levels demanded opposite to the fire.