House in the market at Feria street | sol89

“To be born in the Broad street of the Fair and one to fall sick with the humanity who boils in her scarcely has got tired of walking to cats and it has got up of hands to confront the life to disclosed chest, is a heroic company, which stamps character and has an extraordinary importance for the rest of the life, because suddenly the street has given a perfect synthesis of the Universe to the neophyte. They are these streets that miraculously go centuries of intense life, without the volume of his past has aged them; they are old and they it do not seem; without nothing has forgotten them, they live through a current feverish and authentic life, vibrating with the worry of every hour; in every generation they are renewed in an invisible and most natural way.”

Manuel Chaves Nogales, A child in a street of Seville, in Juan Belmonte, killer of bulls, 1970. 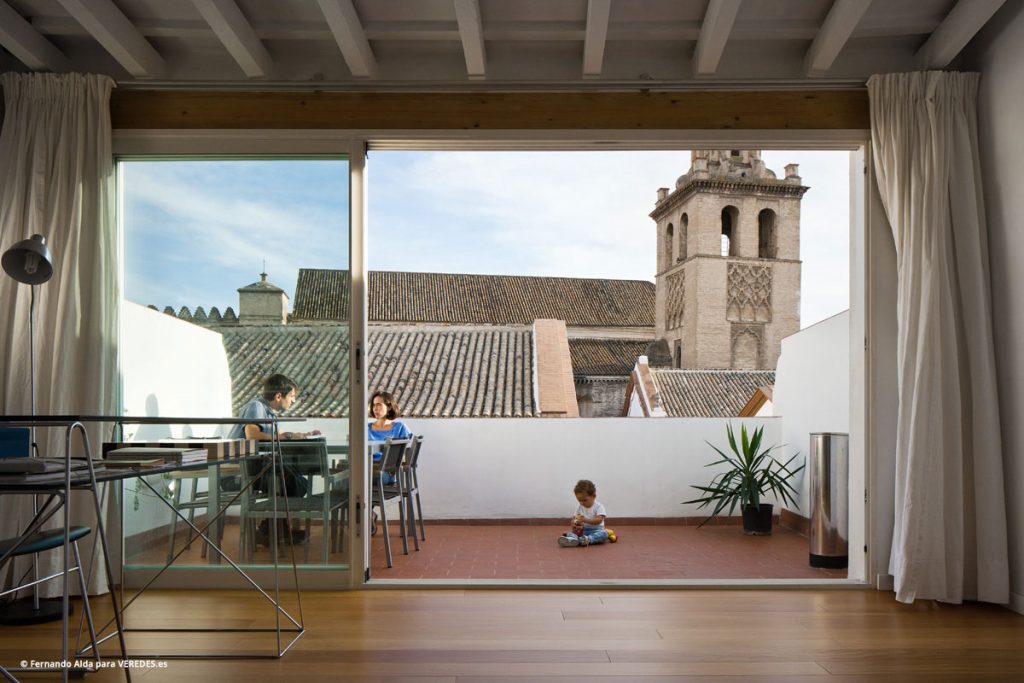 The project arises from an emergency situation: a town hall execution order requires new owners of this 19th century home to intervene on it immediately to repair the pathologies detected by the technical inspection carried out some years before.

The urgency and the limited budget conditioned the mode of intervention: the owners decided to start the work themselves. They demolished partitions, removed suspended ceiling and claddings walls, to get to know what the house could hide. In the process in which they move blindly, where to erase is needed more than to draw and where the project goes and comes back, they go slowly discovering latent house that was hidden, veiled under the guise of partitions, mortars and plasters.

Forged of wood and walls marked by hollows blocked up with the time they report a construction done to outlines from a constant negotiation with his neighbors that should provoke the constant change of his profile throughout the years. On the march they decide to withdraw the wrought ones and girders in worse condition, to weld lintels and to recover hollows that existed in another moment, yielding surface in exchange for gaining volume, also choose to preserve those revealed elements that narrate the history of that place assuming that the time also constructs. Almost without they themselves realize, the house goes looking like what at first should have been: a place where construction and emptiness are alternated in similar proportion.

They continue revealing patiently, it would be said that as archeologists more that as builders, and the evil been of the walls and lintels of the plant to level of street, where there existed a bar of left market, forces to intervening in him; they decide then to make very little, scarcely recover the emptiness of this plant adintelando walls that stop to spend the air, a continuation of the space of the street that gets inside the house, as a passage, a vestibule or an adarve, as the emptinesses that blur the common space in the multicolored plot and to the time porous of the center of Seville. This place turns into the garden of the house, with the peculiarity of which it is under this one, a site of steps and meetings like it is the own tumultuous square of the market of the street Takes a break, is a space without program in which all the uses can happen: the son of the pair is late 37 second in her crossing from an end to other one in his tricycle.

The project without project turns out to be as a text continued from already existing other one, where it has been necessary to erase paragraphs that were turning out to be illegible for the passage of time and where the already written thing was read patiently in order that new lines coexist with the previous ones continuing the history already begun time behind. The text remains opened and still chapters stay for writing.