To the few days of arriving at Vigo, Antonio Valcarce began to work in a bakery of the street Velázquez Moreno. It was in 1914 when cover with José Abalde González the society “Valcarce and Abalde”, dedicated also to the business of the bread and afincada in the neighbourhood of Casablanca. This business becomes quickly in the great bakery of Vigo. In 1918 the daily production was 1500 kilos. 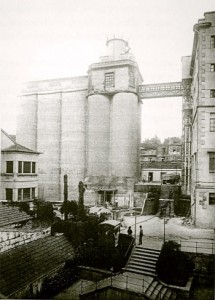 In 1919 the association “was dissolved Valcarce and Abalde” and in the year 1920 Valcarce was associated with other four business people to build the “Company Panificadora Company Woman of Vigo S.A.” dedicated to the bread sale and manufacture as well as of grains and cereals. They expect with this association to arrive at the daily sale of 50 tons of bread. To achieve these industrial amounts and to oust to the responsibility, the company was made with several sales points for all the city (Elduayen, To Pedra, square of to Laxe…) Valcarce was Germany in 1921 to buy the machinery specific to one panificadora automatic, was in that same year when were made with a field in the street Falperra to constitute there the factory.

In the year of its inauguration the panificadora was the more modern of Spain. In 1923 the building already had two plants, a factory of 5´6 meters of height and three rotary square ovens, 4 moledoras, 4 mortar mixers, a store of flours, deposit of fuel, bread and cleanliness office. They worked 30 people. The panificadora emphasised in its publicity its products’ hygiene, hygiene protected by the weatherproof floor, walls covered of blank enameled bricks, showers for blue-collar workers… The alone manual labour entered contact with the bread to collect the bread of moulders and to deposit them in Las Tablas.

Besides traditional breads, the company began to announce the first individual breads, very used in dining room and restaurants. In 1931 were over of building the four big silos. In the thirties, labour disputes and strikes for work improvements affected to the growth of the company, but what more affected her was other groups’ boycott of the responsibility that began a campaign of discredit to win something of commercial field.

With the civil war, the panificadora expanded its demand and even achieved an agreement with the army, that gave him flour and it bought the bread in exchange for a budget price. In the postwar period the business did not decline, and thanks to several bakers’ alliance, the panificadora saw incremented its ration books and therefore, its profits.

In 1941 Valcarce proposes a project of increase in the production that happens of the 24 to the almost 40 daily tons. Although this project is rejected initially, was accepted in 1946, year in which the building initiated his great third transformation. The company, similarly would increase its capital acquiring other companies dedicated to another type of businesses.

Between 1940 and 1943 Valcarce was acquiring actions of Electric Trams of Vigo S.A. in that period and because of being the majority shareholder, Valcarce accessed the presidency of the administrative council, charge that would occupy until its death. In the sixties, the obligation of selling the basic bar to an already stipulated price and because of the improvement of the Spanish economy with which the bread stopped being an essential food in the Galician homes, the panificadora was suffering a progressive profits decrease.

The machinery, so modern in its period, began to be obsolete, and Antonio Valcarce, that for then already was about 75 years did not want to change her for one more modern. In 1962 Valcarce opened within the own one panificadora the company GANASA specialised in think animal, in order to to make good use of by-products that offered the panificadora. In the year 1968 Electric Trams of Vigo S.A. presented a dossier of crisis and it disappeared fugazmente of the outlook from Vigo.

In 1978 passes away Antonio Valcarce, leaving in one very bad situation to the panificadora. In 1980 the Company Panificadora Woman of Vigo S.A. enters suspension of payment. The building remains abandoned to its luck since then, the future will say will be been remembered in foot as it what he deserves be, or if the property speculation will wreck the building that represented to the one which was one of the more significant companies Galician of the twentieth century.

All the information was collected of the book “Antonio Valcarce García 1888-1978”, Of the chapter entitled “Or rei do bread” written by M.J. Facal Rodriguez.