This project is born of the illusion and commitment with the arquitecta of a young person marriage of septuagenarios …. thank you Isabel and José!

The housing is in the known Choupana Cologne of Santiago de Compostela (ancient “cheap houses”). The planning of the city gathers in a study of detail the conservation of this set of housings, for his morphologic characteristics and his unitary character. It forces to the conservation of the composition and treatment of front and his hollows towards principal routes (even in the additions of plant), allowing a freer treatment in the gatherings towards interior courts though they will have to guard coherence with the rest. There allows itself the accomplishment of basement, the addition of one more plant the principal building and the addition of an annexe in ground floor of 4,80×5,00 m. Of plant and 3 m. Of height. 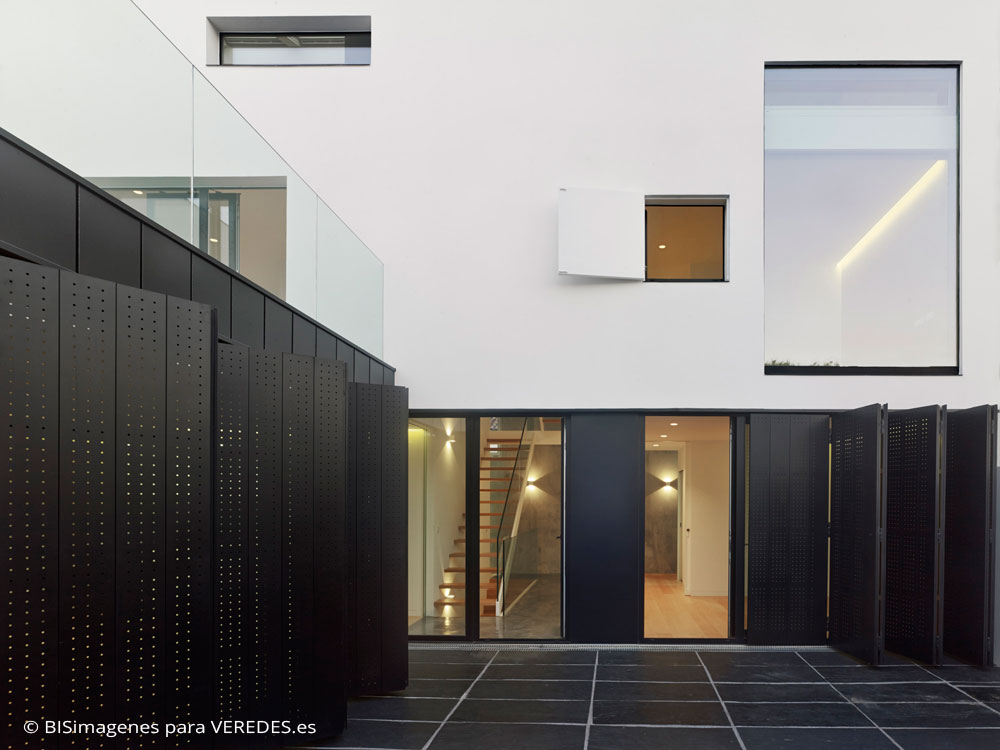 The plot does corner with 2 streets, existing a difference of level between both of approximately 1,50 m. Of height. The principal access to the existing housing was taking place on the high part, in such a way that both the interior court of plot and the housing were raised on the exit ramps, being necessary the utilization of stairs for his access from the exterior. This particularity derived from the local topography, has not been born in mind by the study of detail, nevertheless, in our case there will be ‘ the generating one of a major utilization of the lot in terms not only of edificabilidad, but of the spatial and light qualities of the housing.

In an environment with a marked unitary character, in which still there is breathed the simplicity and austerity with which his inhabitants lived during decades, the growth of the city has absorbed this fabric placing it in one of the most attractive places at present. Unfortunately, some of the actions that are removing are ended by me they are far from preserving enough this spirit, realizing treatments of color and of hollows (reenclosures in stone, etc.) that were never an identity of this place.

Our offer tries to join, preserving the spirit of the set, using a current, simple and austere language. The gatherings to principal routes support the composition and size of the existing hollows, whereas towards the interior court, they arrange new openings with a freer composition but preserving the harmony with the rest, as it establishes the planning. To obtain the major one of degree of privacy and protection, the hollows of ground floor have a few folding doors composed by panels perforated of aluminium lacquer in black color. These doors and an exterior shutter placed in the first plant provide with movement to this interior gathering with which the user will be able ‘ to interact according to his needs.

Several generations coexist in this housing: grandparents, children and grandsons … since make compatible different degrees of privacy and sociableness, attending to the needs of 3 different generations? And what is more important, since obtaining it inside a volumetry very determined by the study of detail?.

What in a beginning was looking like a seemingly simple program: 4 bedrooms, 4 baths, lounge, kitchen and dining room, etc., it transforms in the germ of the project.

What in a beginning was looking like a seemingly simple program: 4 bedrooms, 4 baths, lounge, kitchen and dining room, etc., it transforms in the germ of the project.

Every generation will be ‘ arranged in a plant: grandparents in ground floor, grandsons in the first plant and children in the plant down covered; all of them connected by a great space of communication, as if of the small one ” traverse it ” it was treating itself.

Sometimes, one feels the need to open a window to communicate with the environment, with the landscape, with other persons ….., lamentably our climate not always allows us to cover this need…. We place interior windows towards the space of communication not only to cover this need but to make possible different degrees of privacy and sociableness inside the own family.

In the plant basement they are: washer – tendedero, lumber room, room of facilities, bathroom and a lounge for common uses. In ground floor: foyer, kitchen – lounge – dining room, a room and a bath. The first plant has two rooms with baths; and in under cover there is a room with dressing room and bath, this way ‘ as study – library.

All the stays overturn towards the interior private court and are the traffics those that place towards the most public “principal” front, staying the windows to half a height due to the change of level.

Constructivly, the surrounding constant interior one of reinforced concrete provides with great thermal inertia to the building and there is protected in his exterior by a system type Coteterm; forged realized with alveoplacas prefabricated, tabiquería of carton – plaster, pavements of wood, concrete and glass to obtain a major utilization of the light in those zones that like that ‘ were needing it.