Domain, space to our return and edge of the action.

The conflict is the brand that indicates where they finish or begin other adjacent spaces. Of the possible harmonization of this conflict it will turn out to be the nature of the collective thing, a reequilibrium of forces that organizes the settling of the spaces and the interstices that allow the steps and movements. There exists always a fundamental core, origin that it does of reference and from where certain energy is projected towards the exterior, where ultimately the form is born. This origin, function or use, is the one that later formulates the architecture, function that grows and extends giving us the dimension with which we will work. Rules of the game, brands that organize and limit it and that will turn into the lines identical with the soil of the playground, as the walls and the walls of closing of the architecture. 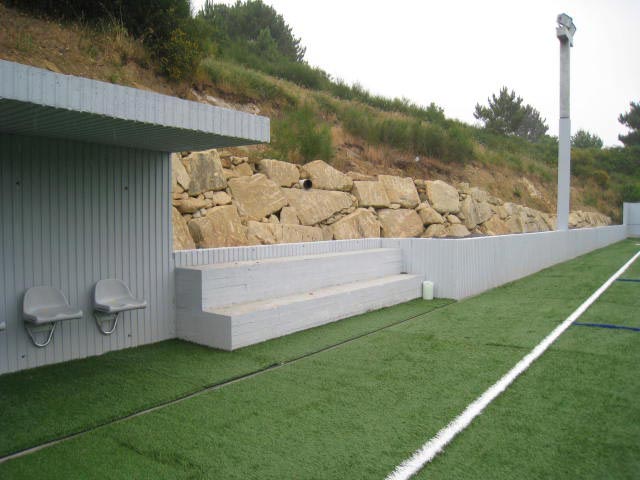 Object, purpose and definition of the work.

The project has for object define the basic guidelines for the reconstitution of the walls of closing and containment of lands, to this and north, and the endowment of artificial grass to the municipal field of football of Ace Salt mines in Esteiro, Walls, province of A Coruña. The aim is to give response to the growth, width and length, and adequacy and improvement of the new demands of program and regulations Fifa and Nide of sports comfort for the former space of obsolete game to the regulation but still in use.

It is competed in relation for the design of the projected wall, in three wings I object of the work, for the construction and design of a tape without end of concrete, which solves in continuity all the topographic accidents and of use. This tape serpenteante resolves, from the different levels of meeting and containment with the wall breakwater of the area, to the specific implantation of the uses of bench and seat, that they interfere excavating towards the mount, up to managing, the wall tape, to be subverted and in occasions to climb in vertically doing of props or posts of lighting. In the same way, also this domesticación of the tape, serves to bend in horizontally, of form similar to the rest of his adjustments, to be visor of the benches or support of advertising and exit of emergency and network parabalones in the north wings.

Type chose for an industrial encofrado with an interior in sheet Pegasus with the intention with which the wide lengths of the cloths were remaining marked by a striped form so that they were not turning into smooth surfaces with effect mirror due to the reflection of the Sun. This way the constant vibration of the waves of the encofrado muffles this possible perceptive visual misadventure. With similar aim of economy of means and of continuity of the set, the support staffs of the lights are born and are a high part of the same wall, before finishing off in crosspieces of galvanized steel that they do of support of the lights. His logic compositiva and constructive general there do not stop being sent the traditional cruceiros of the vernacular immediate environment.

The rest of the original walls of closing and wardrobes for economy of the intervention are not an object of the work and simply they happen to be identical with grey to muffle the original finished salmon and his relation with the leaden landscape of her laugh and mounts of the immediate environment.