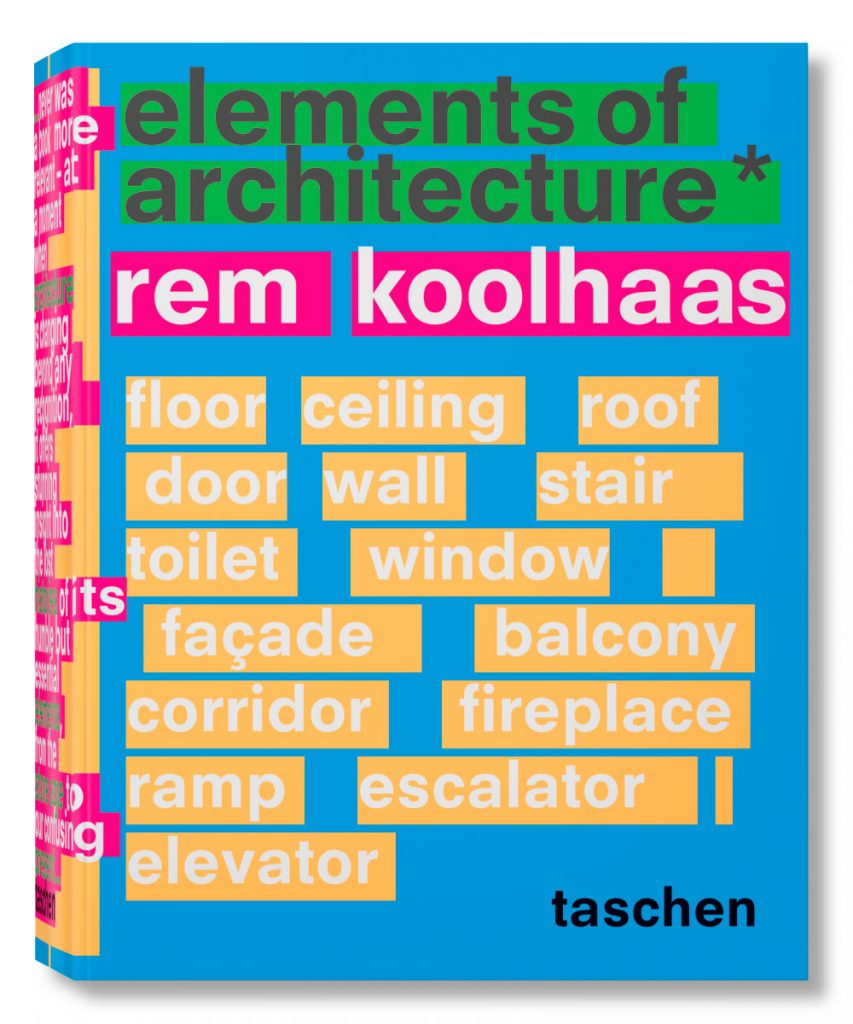 Elements of Architecture se focuses on the fragments of the rich and complex architectural collage. Window, façade, balcony, corridor, fireplace, stair, escalator, elevator: the book seeks to excavate the micro-narratives of building detail.The result is no single history, but rather the web of origins, contaminations, similarities, and differences in architectural evolution, including the influence of technological advances, climatic adaptation, political calculation, economic contexts, regulatory requirements, and new digital opportunities. It’s a guide that is long overdue—in Koolhaas’s own words,

“Never was a book more relevant—at a moment where architecture as we know it is changing beyond recognition.”

Derived, updated, and expanded from Koolhaas’s exhaustive and much-lauded exhibition at the 2014 Venice Architecture Biennale, this is an essential toolkit to understanding the fundamentals that comprise structure around the globe. Designed by Irma Boom and based on research from the Harvard Graduate School of Design, the 2,600-page monograph contains essays from Rem Koolhaas, Stephan Trueby, Manfredo di Robilant, and Jeffrey Inaba; interviews with Werner Sobek and Tony Fadell (of Nest); and an exclusive photo essay by Wolfgang Tillmans.

In addition to comprehensively updated texts and new images, this edition is designed and produced to visually (and physically) embody the immense scope of its subject matter:

· Contains a new introductory chapter with forewords, table of contents, and an index, located in the middle of the book (where it naturally opens due to its unique spine).

· Translucent overlays and personal annotations by Koolhaas and Boom are woven in each chapter to create an alternative, faster route through the book.

· Printed at the originally intended 100% size for full readability.

Rem Koolhaas is a cofounder of the Office for Metropolitan Architecture. Having worked as a journalist and scriptwriter before becoming an architect, in 1978 he published Delirious New York. His 1996 book S,M,L,XL summarized the work of OMA and established connections of contemporary society and architecture. He was listed among TIME magazine’s 100 most influential people in 2008, and among many international awards and exhibitions he received the Pritzker Prize (2000) and the Praemium Imperiale (2003). He directed the 2014 Venice Architecture Biennale, coinciding with the first publication of Elements of Architecture.

Irma Boom is a graphic designer specialized in making books. Since founding Irma Boom Office in 1990, she has worked with the likes of Chanel, the United Nations, OMA/Rem Koolhaas, Fondazione Prada, Pirelli, and Rijksmuseum Amsterdam. She received the Gutenberg Prize and the Johannes Vermeer Prize, the Dutch state prize for the arts, among others. Her work is in a permanent collection of the Design and Architecture Department of the Museum of Modern Art in New York. Since 1992, Boom is a Senior Critic at Yale University in the USA.