The sociocultural origin of the sciences of the complexity | axonometrica 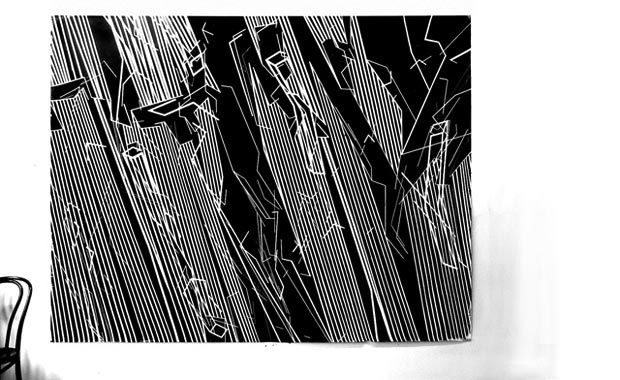 The image of this post belongs to the architect and thinker Lebbeus Woods | artfinder.com

One of the areas of reflection of this blog consists of looking for the origin of the paradigm of the contemporary complexity. This will hides the deep conviction of that the idea of complexity is today key for the development of tools proyectuales valid in architecture. On the one hand everything tries to register it to discipline, that is to say everything what turns about the architecture, which incorporates by some means or another a reflection on the complexity. On the other hand, there is looked out of the discipline all that that concerns what we might say the socialization of the concept of complexity. In this investigation, thought over loudly, one has found a fertile field in the science.

Nevertheless, still assuming that the sciences paid the territory of the complex thing and they are an area of the knowledge key to structure the logic of the complex thing, a necessary question arises on having noticed the resounding simultaneous changes that are given in infinity of different matters during a very precise period of time: the 60s and beginning of the 70.

The question cannot be other one that why? What does happen of extraordinarily during the long decade of the 60, which suddenly hundreds of privileged minds use his time and his energy in investigating the complex behaviors? There is some reason, some logic that makes such a determination understandable?

In a paper sent to the Twentieth World Congress of Philosophy by the philosopher Elba del Carmen The Complexity Was Laughing titled: Considerations Epistemology and Philosophical,1 gives himself a fundamental track to understand so many intellectual activity.

The fundamental premise that supports the teacher Riera and that I make mine to tenor of the investigated till now, is that the study to interdiscipline on the complex systems is a response to the social change and also culturally opposite to concepts as those of disorder and chaos that they were displaced of the area of the classic science, for being to consider them to be reports and emptinesses of significance. If we extend this affirmation a bit more, we will see that actually what happens in science is what happens in the architecture. During the 60s there takes place an intensive disentailment of the classic science in favour of a new consideration of the scientific thing – as like it happens in architecture in relation to the Modern Movement – that it provokes a displacement towards an innovative model of thinking the science, puts topsy-turvy any consideration assumed up to this moment and shapes a new cultural substratum.

Already be for the sum of the System theory of the 40s, more Einstein’s revelations in relation to the physics, more a critical process towards a classic insufficient model to explain certain realities, the science gives one I overturn brutally. In the bottom what happens is that the scientific world, as the architectural one, was accumulating too many questions without response.

To clarify something this position, finger to remember the beginning of the mentioned article:

“We depart from the affirmation that holds that one of the basic conditionings of the models and scientific theories is cultural. In the current context, we can state that different disciplines, it sufficiently separated between yes, like in order that the direct influence turns out to be like improbable, have devoted themselves to study similar problems and to base his formulations on suppositions isomórficos. This is generated because the worries that sustain them are strongly loaded with significance inside the cultural commanding context”.2

In other words, a not regular, simultaneous and multifocal process of intellectual innovation as the happened one in the field of the science as the happened one in the field of the architecture during a period of time so I make concrete as the temporary frame object of study my investigaciónes, only it is possible if a common substratum is given, if a need exists already not in strictly cultural terms, as affirms the teacher Riera, but in terms also social, understanding that the social thing precedes to the cultural thing, that is to say it performs before the cultural thing and in addition he structures a new latent demand that the cultural thing gives form, already be intellectual or physically – or both in case of the architecture-.

Returning to the sciences of the complexity, if we revise the structure of the theories that are grouped under this scientific umbrella, we will be able to imagine the nutrients of the substratum on which these new scientific ideas are constructed. In a beginning the concept of chaos, it was associating with the formless, empty and untid thing and in any case with the ignorance and imprecision humanizes.

Later, at the end of the 50s and especially during the decade of the 60, there arises a new line of investigation that departs from the conviction of which her not – linealidadestá throughout in the nature, contrary to what was supporting the classic science for the one who was an exception. On the contrary, they are the closed and stable systems, which constitute the exception.

In view of such a deployment of scientific advances it is possible to affirm that in this decade they gave to themselves the sociocultural conditions for a conceptual revaluation that was integrating order and disorder, reversibilidad and irreversibility, linearity and non-linearity. Opositora was a question itself to take a dialectical significance from them to reach a more complex, richer and fecund order, which shows deep structures codified with enormous possibilities of information.3

The importance and legitimacy of the sciences of the complexity in the architecture, has not been a source of discussion in decades later to the 60s. The brutal inflation of the capacity of calculation of the computers in the 90s and during everything what we take of century, they have supposed an effervescent fever of practices centred on attainment of architectural objects argued under the epigraph of architecture paramétrica. This fever, though it continues experiencing new advances, is opening way to an area of reflection that seems to me to be much more interesting. The city and his manners of behavior, the possibility of understanding the urban fact and consequently the fact proyectual architectural, is much more fertile from the perspective of the sciences of the complexity.

It is not a question of shaping so more or less complex objects geometrically from logical type bottom-up. Rather fewer objetual tries to construct a sphere of reflection him and more structural today incipientemente installed between sociologists, geographers, town planners and architects. From the fundamental one The new beginning of the Urbanism,4 of François Ascher to Stan Allen’s recent LandForm Building5, drinks his sources of direct or indirect form in the theories of the 60s and 70s grouped in the sciences of the complexity.

There would be necessary at the time a revision and a socialization of these theories, to help to establish a contemporary reflection of the architecture and to find, perhaps to construct, new tools of reference of the fact proyectual architectural.

Something of this will happen in this blog.

1 RIERA, The Complexity Was Laughing titled: Considerations Epistemology and Philosophical, presentation of the philosopher accepted in Twentieth World Congress of Philosophy, celebrated in Boston, Massachusetts from August 10 to August 15, 1998