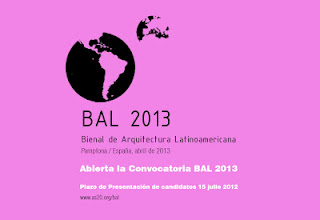 They will be able to present his candidacy to take part in the BAL2013 all the architects who have his professional domicile in some country of Latin America, and whose age, on December 31, 2011 be lower than 40 years. The equipments selected in the second Biennial show BAL2011 will not be able to present again his candidacy, though yes they will be able to do it bienalistas of the BAL2009 that still they fulfill the requirement of age.

The candidacies will be able to be personnels or of equipments of architects legally constituted. In the latter case, one will have to justify a professional joint path. It will not also be sufficient to be able to appear that only one of the members of the equipment fulfills the obligatory requirement of age, but they it will have to fulfill all of them.