The current composition of the juror of the summons ARQUIA PROXIMA relies on professionals of international prestige simultaneously that it crosses the geography of the country, including for the first time the look from the exterior, a fundamental argument that will contribute a more wide vision of the reality of our country concerning the emergent architecture. The juror together with the police station, will choose the 128 and 24 accomplishments selected to form a part of the catalogue and the exhibition, respectively, as well as the prize arquia/próxima 2012 provided with 15.000 Euros. 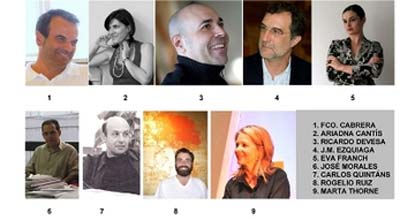 Francisco Cabrera, representative and employer of the Foundation Architects’ Box, with an intense experience as liberal professional, being his work published in diverse magazines of the sector. It combines his professional activity with educational activities, collaborations in magazines of architecture and the performance of charges of responsibility in collegiate institutions.

Jose Maria Ezquiaga, national prize of urbanism 2005, his vision of the contemporary city and his proximity before the emergent generations will be vital to value the new practices of the youngest for questions of civil participation or urban regeneration, actions, etc.

Eve Franch, from New York, current director of the gallery storefront, a space of reference in relation to architectural and artistic practices linking to the constructed, academic and explanatory world in the city of New York.

Carlos Quintáns, Pass-commissioner (edition 2008-2009) Mention the XIth BEAU 2011, Selected I Reward Mies van der Rohe 2011 and Finalist Prizes FAD 2011. His wide professional activity understands the Co-direction of magazines of architecture as Tectonic and Obradoiro, the teaching as well as the winning and recognized activity as liberal professional.

Rogelio Ruiz, great connoisseur of to happen architectural of our country. I reward Asturias of Architecture 2008 and several second prizes in other summons. Other gained contests: Bought Orbón Avilés 1991, Swimming pools and park in Cangas del Narcea 1993, Museum of the Barn 2004, Museum of the Fishing in Candas, 2006.

Martha Thorne, for his post as executive director of the Prize Pritzker of Architecture, the most prestigious award of the architectural world, Thorne is the link with the architecture that is realized in the world.

If you have less than 10 years of qualifications (title obtained from January 1, 2000), you have until December 31, 2011 to raise your accomplishments