The next month of March the Municipal Chamber of Exhibitions of the Museum of Passion of Valladolid will take in for the first time in Spain, the exhibition ‘Archigram. Experimental Architecture 1961-74’, one shows produced by Files Archigram in London and that gathers through drawings, mockups, documents and planes the history of this architectural movement. Dennis Crompton, the assembly and introduction will attend of this exhibition in Valladolid on 18 March. It shows her will be able to visit until 2 of May. 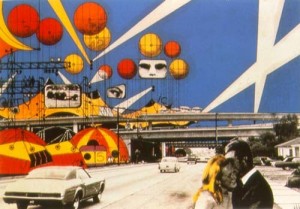 Archigram was a group formed by Peter Cook, Warren Chalk, Ron Herron, Dennis Crompton, Michael Webb and David Greene in the Architectural Association in London that was dedicated to carry out architectural experiments proposing cutting-edge ideas for the architecture of the future. His projects even today are still vanguardistas then they imagined a managed community future for the technology.

It was created in the decade of 1960. It was futurist, antiheroico and pro-consumerist, inspiring in the technology with the aim of creating a new reality that was expressed only through hypothetical projects. In the magazine Archigram I published in 1961 exhibited his ideas, proposing the use of a light infrastructure, with cutting-edge technology, focused towards the survival technology.

Thus, experienced with clip technology-on, disposable means, space capsules and with the imaginery of the massive consumption. His works offered seductive visions of one glamorosa was future of machines; however, social and environmental topics were left aside.

Works of Archigram based his futuristic turn in the work of the architect Italian Antonio Sant’Elia. Richard Buckminster Fuller was also an important inspiration source. Works of Archigram were useful, at the same time, such as sources of later work inspiration as the Center Georges Pompidou, fact in [1971] for Renzo Piano and Richard Rogers as well as the work of Gianfranco Franchini and Future Systems.

Archigram (end that the word threaded architecture and Telegram) proposed a deeply technological architecture, fulfilled with new materials entirely industrial, and indicative of a carefree life way and Utopian.

Archigram was been useful of the language of the cómic and of the collage to spread his proposals: bankrupted horizon cities and colorists, streets with cadillacs, zeppelins, and colourful big announcements.

One of the first and more famous utopias of the group Archigram was the Plug-in City of 1964, a completely produced megastructure in series. They projected an university within her that in the course of time would be done virtual, in accordance with his Computer City, conceived in the same period. The university would go growing in the course of time, classrooms would be installed, or they would dismantle according to needs.

The accessibility of the information was the main topic of his Instant City, a light element set that were superimposed to any town inland of the territory, and that took advantages of living in the city every corner from the country. In that period, use two strategies in his projects. On one hand, as in this case, mobile structures propose. On the other hand propose nets of services to which the user you can connect from any point. Sometimes mix two strategies.

At the end of his group work is another university project, the Invisible one University of 1971. Against the information obtained through the computer, the importance of the human interaction underline. The university is made of relationships between people, human symbols. The university then is a happening whose only print is a landscape levemente antropizado.