For this assembly, there is formed an interior space, independent from the existing one, with pipes of electricity and props, exploiting the material and expressive quality that these elements have and that only is in the habit of being visible in punctual moments of work.

There appears in addition an ephemeral royal assembly, that is to say, that not only is ephemeral because the assembly lasts a little time, but because the material comes, be used and go away as wine, in this case continuing his way towards a work.

The pipes that were used in this exhibition are a part of the arteries that they supply of electricity to the new headquarters of the COAG of Vigo. 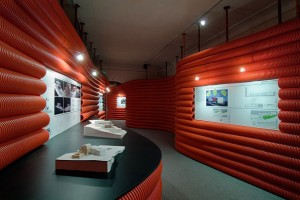 The problem that raises the high plant of the Casa de Las Artes is an excessive division of the space, which impedes a tour fluid and been ordained as the visitors. The explanatory project raises the only circular way, leaving the central spaces for projections or rendered useless.

The Gran de Area Prizes are granted to projects that are in work or still they were not started constructing. For this motive the assembly realizes with auxiliary elements of work, since sopandas or pipes of step of facilities, that they help to understand the moment in which they find the exposed works.

The assembly consists of two principal elements, pipes of polyethylene corrugados and sopandas of encofrado to support them. Together they form a wall of pipes of soil to ceiling, forming a band it continues, that in some zones separates forming banks, lights or supports for models. We do protagonists to materials with a plastic very important potential, which only they are visible in the constructive process but which they are everywhere, secret.

The pipes subject themselves with bridles to the sopandas in the acanaladuras of the pipe corrugado. In the zones of panels the pipe is cut to the half and a cardboard panel fits pen with the stuck image. Turning lines of pipes aside there are achieved mesados and games of directions in the ceiling, that differentiated areas help to create.