Conference Nani Marquina. The crafts like innovative factor of the design

The company, founded in 1987 by the designer Nani Marquina, expires 25 years designing and editing contemporary carpets with handcrafted technologies. Nanimarquina is born in 1987 with a firm idea, her of reinventing the carpet. After twenty-five years of history and with multiple recognitions worldwide, his important contribution to the field of the design is already a reality. To celebrate 25 anniversary of the signature, his founder Nani Marquina will present in Space SIRVENT, under the title of The crafts as innovative factor of the design, a tour across the history of a signature that it was born on the basis of the creation of new concepts and to offer new uses to the carpet, transmitting messages and creating an emotional design that connects with the persons. His designs are the fruit of the multiple trips that they have led her to contacting the different cultures, investigating craftsman brings over of the ancient technologies and of the trade. His aim is of transforming the tradition into contemporaneousness. 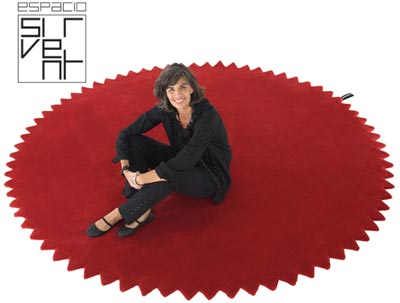 In the conference, Nani Marquina will introduce the different types of traditional carpets, how they are elaborated and the types of knots that are in use in the different countries. Later, it will expose the technologies that are in use nowadays in nanimarquina with videoes and images, explaining the process from the inspiration, the design, handcrafted manufacture and the result.

This year, nanimarquina has presented in the Salone del Mobile of Milan one of the most special collections that it has edited. It is a question of the Collection Chillida, a set of seven made works of the artist Eduardo Chillida you carpet, that they will be present in the Space SIRVENT. The designer emphasizes that 25 years have had to happen in order that I was daring to join the art with the design and to feel proud with the result. Nanimarquina has edited a collection inspired by his drawings, engravings and collages that he tries to be a public inspector to his work.

Nanimarquina is born in 1987 under the direction of the designer Nani Marquina. Nowadays it is employed at more than 50 countries of 5 continents and has turned into a leading brand inside the sector of the carpets of design. Beyond the own designs, nanimarquina has worked with artists and designers of the height of Tord Boontje, Ronan and Erwan Bouroullec, Ron Arad, Martin Azúa or Michale Lin – of whose authorship is the idea of the hotel that occupies the attached space of the MARCO-.

Between the prizes received throughout these years, emphasizes the National Prize of Design in 2005, the Premi Nacional of Culture in the modality of design delivered by the Autonomous government of Catalonia of Catalonia in 2008, the International Women Entrepreneurial Challenge Awards granted by the Manhattan Chamber Commerce of New York in 2008 or, more recently in Tallín (Estonia), the DME Award in the category of small enterprise.

Conference Nani Marquina. The crafts like innovative factor of the design