They will participate 45 projects of 17 nationalities in the different formats of the Festival. It will debate  and reflexionará on the recovery of spaces into disuse in the enclosure of Fabra i Coats of Barcelona and in how all that that up to now was unthinkable in architecture, urbanismo and design, begins to be a praxis in evolution for and with the society.

Barcelona, 22 May 2013.- Of the 27 to 30 June, the Fabra i Coats – Fàbrica of Creació of Barcelona and the Districte of Sant Andreu will receive the eighth edition of the festival of architecture Eme3 whose aim is to discover, understand and share new forms of architecture and urbanismo linked to the realities of the current societies, through the reflection and the exchanges between the professionals that participate and the public assistant. 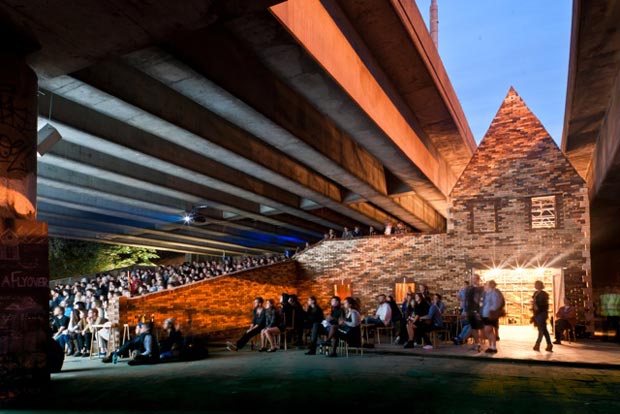 “Topias, utopias becoming real”, the step of the utopias to the reality, will be the central thematic axis of the edition of this year, analysing fields eat: the new uses of the public space (the autogestión, the empoderamiento and the processes colaborativos); the house in situations of crisis; and the space of work in evolution, with examples like the co-working as new model of space..

The election of the enclosure Fabra i Coats frames  in this same reflection, since they are several ships and external spaces, many of them at present into disuse. With Eme3 will favour  also his dinamización cultural, no only during the days of the festival, but during all the month of July in that the exhibition will follow opened and will realise  open activities proposals by neighbours and associations like shows of dance, concerts, workshops, video projections, etc.

The international community MAP13 went out selected of the call to projects in the category Build-it, with his project BRICK-TOPIA. This, consists in the construction of structures abovedadas of brick in the external playground of the enclosure of the ancient factory Fabra i Coats, employing the traditional constructive system of the vault tabicada (or volta of maó of pla) beside new digital tools of structural optimisation through the geometry. This intervention confers to the new square forms and textures that configure the space teaching us the accesses and the diverse environments to realise the different activities so much under the vault as in the spaces created in his surroundings.

The section Share-it, will gather the proposals selected after the international announcement of projects on new forms of architecture and urbanismo. Simultaneously, will carry out actions with a marked component of social intervention that will use like main stage the public space of Barcelona, especially of Fabra i Coats. It treats  of actions that will develop  before, during and after the festival with the end to approach to the new public forms to create architecture and urbanismo through the citizen participation.


The section Share-it will show 45 projects of 17 different countries. Some of them have selected  of the international call to projects, whereas others are invited by the own festival with the aim to give visibility to teams less recognised together with others already consolidated.

Between them, it stands out the project of ZUS (Holland), that will be able to see  in the inaugural session of the Festival. “I do Rotterdam” is an initiative of collective finance in the creation of the cities, a new model in which the citizens, through a web and other digital applications, propose developments deprived in a small way, no bureaucratic and of low budget. It presents  like an alternative to the urbanismo on a large scale and the first example is a bridge of pedestrians that reconectará the central district of Rotterdam with the Hofbogen, giving back the quality urbanística to the neighbourhood.

Also it will be present Assemble Studio (UK), that develops successful projects of public spaces in urban contexts complicated, helping to the connection between the public and the final user of the space, with his real use; the photographic project “Instant Village” (Romania) of Simona Broken, that shows the sinsentido many times of the territorial planning, the improvisation that sometimes create situations of urbanismo precarious; or Impossible Living (Italy), that will present his project of urban reflations in that through the crowdsourcing the own citizens propose through the web abandoned buildings to which can them  give new uses.

Of Spain also will be presents in this section other projects.“Spanish Dream”, of the team Cadelasverdes, is a project that proposes a critical reflection on the economic crisis and his consequences, centred in how the bubble real estate and the banking speculation comported a full country of works without finishing. “Spanish Dream” Approaches to the problem from an emotional point of view, re-creating familiar scenes in works without finishing, with daily scenes in spaces that are not it. Another case is “Estonoesunsolar” of the study Gravalosdimonte, that proposes to create new contemporary spaces in the solar abandoned but having the needs demanded by associations and neighbours and giving answer to problematic concrete.

Eme3 also will receive some interventions like Kopf Kino (Germany) of ON/OFF, in which through an object designed, a shopping trolley with a projector that goes  moving by the city in front of transeúntes curious that begin to see the power of the object and spontaneously act reciprocally with him.

When Eme3 started in 1999, his idea was to turn into a space in which architects, urbanistas and creative of different disciplines could find and show his projects: innovative works, little conventional and that somehow escaped  of the majority tendencies in the construction and the urban planning.

Today, 14 years after the first edition, Eme3 already has positioned  like a platform of opportunity for the expression and presentation of proposals and architectural ideas. A space of exhibition, debate and experimentation that acts like forum of interaction and lanzadera of proposals that conjugan the architecture, the art and the design. Eme3 generates ideas that materialise  in different formats: installations, urban projects, workshops, conferences, debates and audiovisual projections and develops  in several locations through his continuous programming eme3_on and his annual appointment of reference, festival Eme3, that in his seven editions has received a total of 70.000 visitors.