The construction accepts the pre-existing ruin and does it part of the same, integrating it in a group edificado complex that wants to give answer to all the solicitaciones present in the commission. 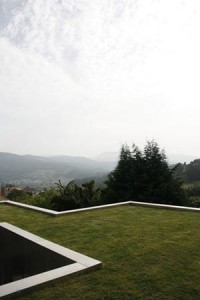 The commission consisted in the rehabilitation and extension, for his use like house, of the ancient Pazo “Or Castelo”, a small rectangle of mampostería of 14,10×6,6m., of origin neoclásico, with the long side had in the axis this-west and that found  in ruins. The plot situates  in a valley with orientation south, delimited and protected of the winds by the Castro of the Teixugueira and the Coto of Abade.

The house projected accepts the construction in ruins and does it part of the same, integrating it in a group edificado complex that wants to give answer to all the solicitaciones present in the commission.

The volumetry of the house  sectoriza radically, the ancient Pazo devotes  to the zone of day and projects  an extension for the zone of night. The ruin covers with an extraneous and odd element that poses  on her and that it wants to give him the conditions of luminosidad and suitable ventilation to the current times. Through the lucernario the sun heats the wall north of the ruin. The lucernario is also watchtower to enjoy of the privileged seen on the valley.

The extension  disgrega by the side west of the plot, contributing intimidate to the group when limiting the seen of the neighbours on the same. Escaping of geometries rotundas undoes  in three pavilions, each one with orientation south and with a piece of garden in front.

It exists a conscious will of abstraction in the election of the materials of the two elements that contribute  to the pre-existing volumetry, the cover of the ruin and the extension that will contain the zone of night, characteristic that will allow to read with clarity the distinct ages of the group.

The aluminium of the façade will contribute, with his reflections, a variable perception of the object. The zinc will adapt  to the geometry posed in the ruin and will win, winter to winter, the dignity that requires the cover of a Pazo.

Work: Rehabilitation and extension of the Pazo “Or Castelo”