The inquest which result appears in this site has tried to find and develar a theoretical common frame concerning the methodologies proyectuales based on the utilization of graphs as form of graficar procedures of design. It has looked for this theoretical frame across the analysis both of the works and of the theoretical contents that sustain the practices proyectuales above-mentioned. In addition, this inquest complements itself across the putting in action of these procedures in an educational concrete practice that has allowed to extract conclusions brings over of his viability as didactic strategy. To do it there has been analyzed the theoretical production of the diverse architects who take to the practice these experiences, and in addition – across slant of the concepts analyzers that hereinafter specify – the works in that these procedures have been applied. This work has been realized in parallel by other educational experiences in which his authors have taken part and which feed in a sometimes direct and sometimes indirect way the conclusions that here express. Especially it is of distinguishing the entails with this work of the course of Preliminary designs iii from the Workshop Perdomo, and the optional subject Procedures Diagramáticos, dicatada in the year 2009 and 2008. 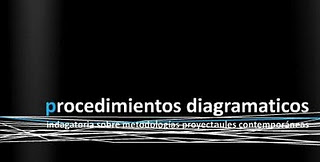 This one is the book, in digital version, product of the investigation ” Procedures diagramáticos, inquest on the methodologies proyectuales contemporary “, realized by Raúl Velázquez, Luciana Echevarría and Lucio De Souza.