What is native 550?
The Native 550 is the road that goes from To Corunna up to Tui. Actually, it is a leitmotiv to analyze this city that spreads out on great part of our geography, this city that theoretical some of they of them coincide in qualifying of diffuse, others of fragmented and even some of globally. In case of Galicia, this phenomenon centers in the Atlantic band, about big infrastructures, as the highway AP-9, the railway axis North – South, or also, more domestic that one as Native 550, which one endures as plot thread of this work. 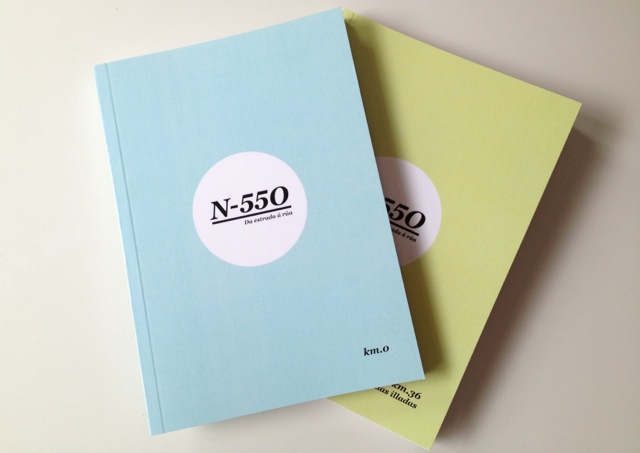 Our intention consists of portraying how there is constructed the suburban Galician world, which are his singularities, which are his similarities in the frame of a global scene, etc. A speech woven with multiple questions, some with answers, others without resolving… Everything with the idea of being discovering a city little explored till now.

How do we analyze the native 550?
Our project consists of a permanent and participative trip for the Native 550 and his surroundings. We try to make an analysis bottom up, that is to say, concentrate on the different formal entities that compose our territory, up to having a global vision of the question. The formal units that we detect up to the moment are the following ones: housings isolated (stuck to the road), urbanizations, rural, polygonal cores and average cities.

Each of these categories will be a motive of a detailed study, giving place, of every time, to a publication. At this moment, we have the premiere with an introductory book, named km 0 and the first volume of the collection km 36, the isolated housings. Both copies can be acquired going to proxecto.n550@gmail.com.

Who does native analyze 550?
The publication consists of reflections of the equipment N-550, formed by the designer Noemí Díaz Patiño and the architects Xulio Turnes Vieito and Ramon Viéitez Rodríguez, but also with a collaborators’ wide range. The people who accompanies us in this trip belong to two very certain profiles. On one hand, we possess the collaboration of academicians, of confirmed prestige, and, on the other hand, young artists who give us his particular point of view on the matter.