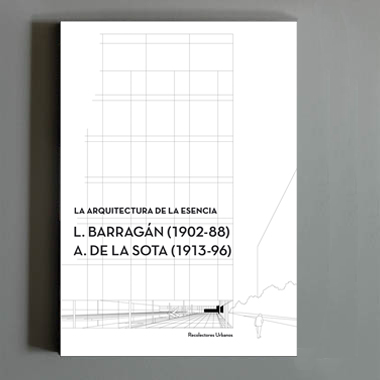 The architecture of the essence: L. Barragán and A. de la Sota tries, in a temporary frame annotated to the 20th century, to approach the process of ideación from diverse optical, complementary all of them. The authors of the texts develop an aspect of the logic of the project process, across different visions of the works of the selected authors. We believe that his contributions will serve to throw light on the rigor and the clarity of the criteria adopted as Barragán and of the Jack in his architectural projects. Logic of the process that is revealed in the essence of the projects, the architecture of the essence.

Barragán and de la Sota, in an evident parallelism in the time, they exercise his teaching in both shores of the Atlantic Ocean submitting his creations to a process of constant purification. This fact allows them to fuse the vernacular thing with the current of a way independent from the architectural language used by both.

The differences that show between the teachers enrich the respective speeches in the process proyectual. Barragán handles the shortage of material resources as a creative weapon, with a blind confidence in the trade. De la Sota he explores the conditions of the technology of his time and the utilization of the materials in places for which were not thought in a beginning.

And all this, joined a personal enrichment by means of the formation in the noble arts and the knowledge of other architectural worlds, forms the scene in which both teachers will develop his expositions proyectuales in an attempt for discovering the secret thing, the mysterious of the common things. This vital, introspective attitude, of silences, shared by Barragán and de la Sota, leads them for a way of an own, personal language, mixture of his personal experiences and the racionalist expositions of the modernity.