” An architecture of minimums for a building spectacle. A series of spaces concatenated in continuous transformation will shelter the study, exchange, learning and enjoyment of the ILUSIONISM. “ 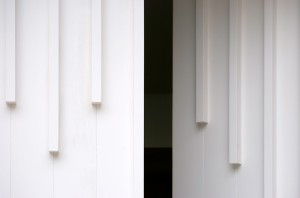 Before a rich and dynamic program like that we are presented by the Magicians’ Association Profesionais of Galicia we meet a lot of 50m ² in Ourense’s historical hull the only front, to preserving for being protected by the Special Plan of Interior Reform, of bajo+2 with an ordinance [to colmatar] of down +3 + attic retranqueado, the existing front would be finished off by a gallery.

In the front of stone the blocked hollows recover. Two fixed totally glazed carpentries liberate the door of access. In the planta superior the symmetry breaks slightly with the break-down of the openings of access to the balconies.

[Re] interprets the gallery as a formal element and of environmental control, playing with the transparencies and the modulation of the carpentries. The design of this element is fundamental to reduce the thermal earnings in the severe summers Ourensanos on having been totally exposed to the Sun of west. The muds support the distances of the vertical amounts of the traditional adjacent galleries that close to the dimension and disposition of the same ones provoke the protective wished behavior.

With three vertical practicable hollows of the attic retranqueado that lead to the terrace of the building the new and only front remains formed.

In the interior the spaces are liberated to front and are articulated by a double traffic.

These multi-functional spaces do not possess fixed furniture to be able to facilitate the transformation and adapt to the use that has it is this moment [Exhibition, didactic Classroom, Room of projections, holding a permit visits, etc.]. The tables are solved by means of a hydraulic structure sheltered in the thickness of forged like that they will be able to place and to gather with supreme rapidity. The chairs are chairs apilables that guard in small spaces that the regularization of the dividing ones offers the same thing it happens with the racks, explanatory niches … etc.

The use defines deeply the intervention what provokes an intense relation between the designers and the users to obtain the looked versatility and to turn the rehabilitation of a small building into an opportunity to realize a building ilusionante.

For all that he us takes a fancy that the itinerary that proposes us the Magicians’ Association sure Profesionais of Galicia that will catch the attention, will provoke interest, it will provoke amazement, will wake illusion up and will end in plaudit as René Lavand defines the ilusionismo.

It is a question of a singular building that he does not adapt to any concrete use in which there coexist many functions that are forming different buildings as needs and illusions appearing. This overlapping of programs for the same use [the magic or ilusionismo since they like to recount those who devote themselves to her] provokes the search of coincidental elements and insubstituibles placed in the place adapted to facilitate the transformations.

The result is a simple plant definite and annotated by two vertical traffics.

To the program reputting is given him by means of fixed furniture that stays in wrought [tables], mobile furniture [chairs] that is stored in the spaces that are generated on having regularized the dividing ones. The trasdosados generate niches, racks and cupboards. The spaces transform by means of “roles”, panels deslizantes, the decoration is mobile for what every room can be great … for the same use or for other one [miromagia, magic closely, magic … exhibition of games and utensils of magic, library, file, teaching magic and ilusionismo … etc.]

To reinterpret the Gallery [more than a formal element]

For requirements of the regulation the added ones in height must resolve compositivamente as the traditional galleries. These from always have recovered a function of thermal control acting as captators and accumulators of energy during the winters and as insulating and absorbers of the heat in the summers.

The spatial limitations which we meet disable a traditional solution of gallery to stand firm as for his component linked to the thermal comfort.

There appears a great cloth of closing formed by carpentry of wood of cedar and glasses that alternate transparencies and opaquenesses that seek to contribute dynamism to the front, in his interior and exterior perception and to tint in major degree the fragmentation of the cloth.

On the outside sections of cedar of 5×18 cm arrange vertically ahead of the cloth of closing like veil darkening and protecting of the aggressive soleamiento of West existing in Ourense in the summer periods.

The pace, the depth of the sections of cedar and the separation of these elements between yes, as well as with regard to the cloth of closing they come defined by the formal paces of the traditional galleries of the environment, and for the study of the angles of incident of the solar beams for the orientation and latitude in which we are.

The pace of the exterior veil tints every three pieces, duplicating the same one sticking two sections, 10×18 cm, which corresponds with the structural elements on which it rests the small cover that connects the solution with the attic retranqueado and contributes the difference of sections, thicknesses and paces as happens with the traditional systems of gallery.

The function amble and the aptitude to contribute control for the solar radiation in the epochs most beaten by the Sun do that we are before something that tries to be more than a formal element.

Work: House of the Magic