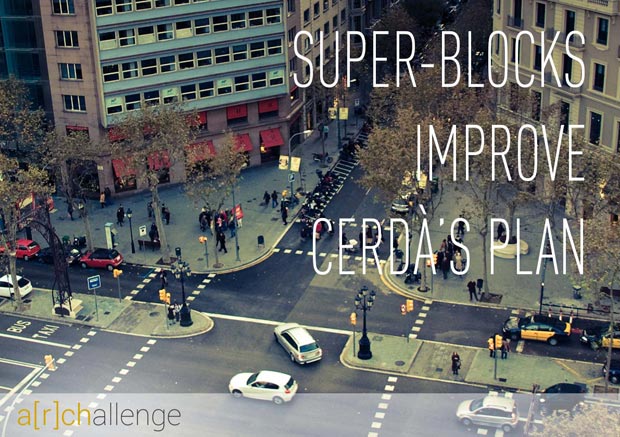 A super-block is a new urban quarter that is created to achieve the liberation of the majority of the area that today is mechanized in order to turn the pedestrian into a citizen again. In short, it is done to give citizens the chance to benefit from all the functions that they can´t use now as it only leaves them with the use of a tiny line, the pavement, next to the buildings.Barcelona’s city hall, through the modification of the bus network, has provided the first step towards the new urbanization of the city, recovering Cerdà’s super-blocks.The area we propose is between Entença Street and Muntaner Street (in vertical) and Paris Street and Mallorca Street (in horizontal) as a general plan. In order to improve the area’s control, we propose a shortening between Entença Street and Viladomat Street. The proposal we’re offering only concerns this super-block.

Nevertheless, City Hall’s goal is to implement the changes made in this super-block, later, in the whole city.

Super-blocks’ quiet streets give us the opportunity to imagining a different public area: greener, more accessible, pleasant, where we can ride a bike… and at the same time we can remodel this setting to make it more self-sufficient.

We´ve created seven main objectives in our consideration of the super block project. It must be a model capable of being applied to the rest of the city, in other words, a model that can be expanded to the area outside of Eixample de Cerdà.

That is to say, we would like you to keep in mind the construction of the whole city but just create a design for the block.on the redesign of the block.