The idea consists in creating a contemporary house but having very in account his location in a very particular zone of the villa of Noia, proposing a simple answer but rotunda, current but integradora in the context of a neighbourhood fisherman with a lot of character. 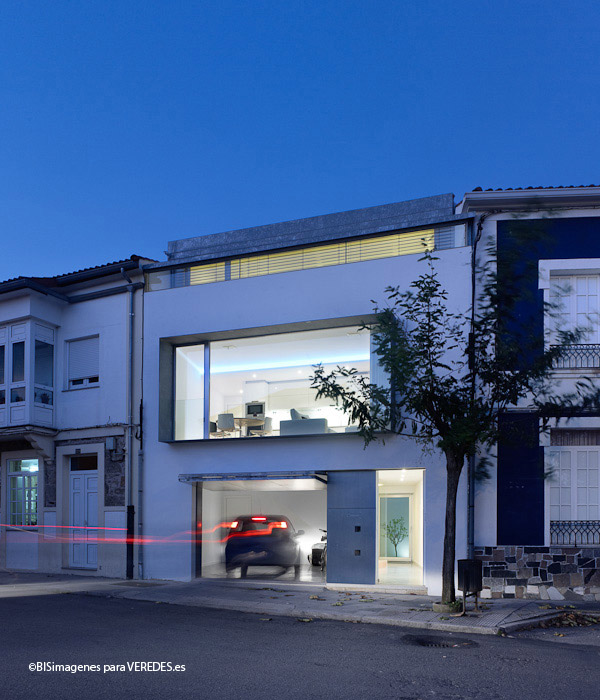 The house finds  situated in the neighbourhood of Mud, inside the Villa of Noia. A place of sailor origin with houses of humble construction. In the centre of the neighbourhood, in front of the square and looking to the estuary of Noia finds  the plot object of the project.

The Mud_House is born like a simple answer to some surroundings with character and some impressive seen on the estuary of Noia. A simple façade but rotunda is born with the will to give a current answer but integradora, impregnating of the freshness of the constructions of the place.

In low plant a big portalón of steel galvanised offers us his “harder” face protecting the interior of the house of his more immediate surroundings doing use of a very common material in the zone for the closing of portalones and closings.

In the first plant, a big gap opens the the house to the estuary, a drawer of steel galvanised in hot frames the gap and serves of solar protection.

The plant under cover delays  some metres generating a big terrace to which opens  the main bedroom of the house through a big ventanal, in the outside some persianas Venetian of aluminium serve of solar protection and of the privacy according to the needs.

The back façade of the house opens  to an inner playground entirely painted of white in which the sun of the morning rebounds and floods of natural sunlight, like counterpoint a small naranjo humaniza the space.

With hardly 50m2 useful by plant and a very particular geometry (the walls medianeros possess an inclination regarding the façade of some 70°), the stairs positions  in the house like element computer and generator of the spaces. Parallel to the façade, the stairs organises the plant of simple and natural way leaving the main stays to the main façade and the secondary to the back playground.

In the low plant, after the access, shows the stairs one of his stairs suggesting his promotion, after her an open study to the playground and a small naranjo.

In first plant, the main stay of the house (kitchen-living room-canteen) opens  to the outside through the big ventanal, the secondary room and a bathroom do it to the back playground.

In the plant under cover, the main room opens  to the seen through a big ventanal and a terrace, after her the bathroom and the vestidor. A gap establishes an interesting game of visions between the corridor and the stairs and a window in the cover lights cenitalmente these stairs.