If in any project they present challenges or determining different, in this case, to topographic and programmatical, they added the fact of being the first work and the condition to depart from a closed budget, with the difficulty that both questions carry. 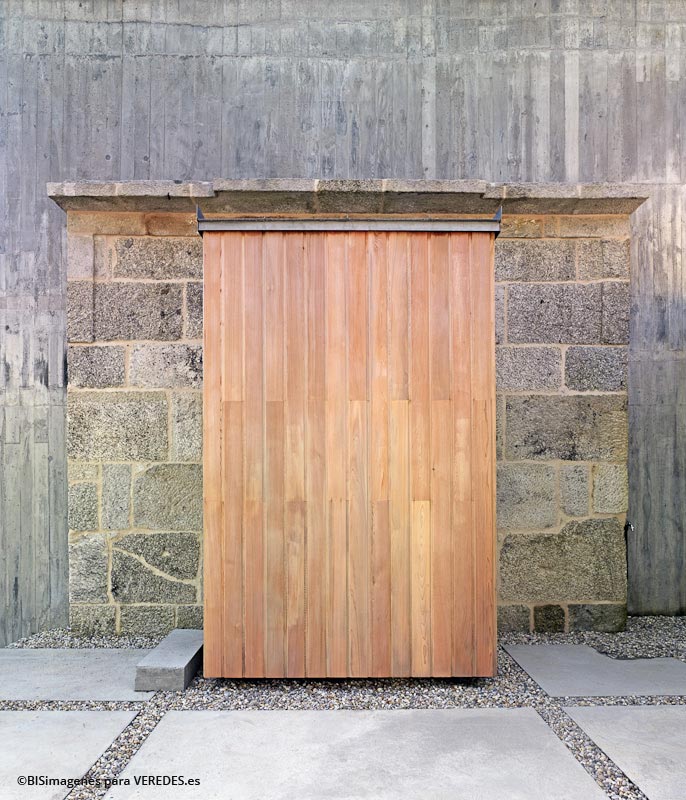 “The responsibility of facing the first work provokes to assume an attitude cautious and contained from a beginning. To do of the humility and honesty of the construction the major virtue.

The work, consisting of the integral rehabilitation of a few ruins situated in Cela-Bueu’s place, places in such a visible place, like watchtower, that the interest resides precisely in achieving that it slips by. To look for the intimacy and simultaneously control of the landscape that from the first moment the owners claim.

The way of doing it was to reconstruct putting in value the preexisting thing. To emphasize with the materials the ancient thing of the new thing, the hot thing of the cold thing, weighed of the light thing, the fragile thing of the stout thing…

To allow that they should be the materials those that wake the senses up … the concrete will change with the light, the stone will be winning in patina, and the wood will contribute the agreeable smell of the cedar, always I live..”

A housing definitively that bears the recollections in mind and propitiates the backdrop of the futures.

The owners, residents in Castile but with familiar entail in Galicia, fall in love with the zone and choose the place to enjoy him like house – refuge, with a minimal program, but with three very clear premises:

The only bedroom: they will be hosts by day, but not by night.

The safety, for being this housing of the second residence, and that influences clearly the sensation of housing – bunker that offer his main faces.

See without being seen: the panoramic sight is promoted from the lounge and there is late the volume that shelters the bedroom and bath, with his terrace nabbed after the cover of the lounge.

The plot, in the place of It Watches, Bueu, strikes for his marked character of natural viewing-point of her laugh at Pontevedra, with a pronounced slope and two possible income to the plot, both for the North and for the West.

The regulation prevents from reconstructing the architecture in the same position, for what they rotate and displace the walls to expire with the minimal retranqueos.

The construction of the one that splits was possessing two ruins, very degraded. Nevertheless this one was a ruinous condition and of past history the one that attracted the owners, and that turned into premise the reutilization of any constructive element capable of being recovered.

The offer takes and competes for preserving the composition of the preexisting volumetries in the possible thing and operating the minimal thing on the topography of the plot. The own clients influenced by his formation ingenieril, sail between desires of contemporaneousness and tradition, proposing the concrete to face dress as one of the possible materials of front.

The forcefulness of the inner door of entry, with the volume fragile demolished of the cedar, the ancient chairs of stone and the walls of seen concrete, is undoubtedly the clear reading of this search for re-using and to integrate the old thing and the new thing.

The minor volume with walls of stone and cover of tile, acts as main face to the landscape, giving opposite to the North of the new housing, focused towards the sights and remembering at all time the humble origin of the housing.

After him, another volume to two heights in concrete to seen face, contributes a more contemporary reading, but with the respect of the one that is re-brought not to overwhelm. The principal entry, in a lateral position, respects the former disposition and recovers the preexisting chairs, joining between the coarse texture of the concrete encofrado with table and the warmth of the cedar.

A minimal body of concrete connects both volumetries, with the clear intention of which dialoguen between them, granting each one his autonomy and presence. In turn it will use as corner to which to come from the bedroom and to dominate the landscape, always with this spirit of space of minimums.

The wood of cedar on the outside, it tries to smooth the hardness that so much stone and concrete award to the architecture, contributing the hot and domestic reading that the fronts demand, though always with a clear vocation of suggestive garment, allowing that the forceful materiality of the bottom should not lose his protagonism. Three big cons sliding panels help that the image of the housing could change into moments, helping to tint the light that enters, without stopping enjoying her.

The fact of departing from a budget closed from a beginning, provokes difficulties in the direction of work that they need of rapid and exact decisions. But also they allow to improve the direction while in all that the written has to be executed and described. The good communication between the different agents turned out to be fundamental, as well as the previous study of every detail of work, advancing in the project of execution many of the habitual decisions of a direction of work.

Providing to every space of his interest and importance.

With the difficulty that carries a reconstruction of this type, it was a question of giving him value to every small space of the housing, with the same spirit of the commented before, doing it without big artifices, marrying tradition and modernity of a calm way.

To avoid the standard thing, with the firm conviction of which in the particular thing there resides one of the most important values of the experiences. None against interior opens in the same way that different, any window is of the same size that different, … any space needs of a light, of a smell, of an intimacy, … The concrete appears to the interior, the wood smells, the hollows are manipulated from several situations of the housing, the indirect lights accentuate the meetings, the ceilings shelter and accompany the moments..

The balance of all these factors will do that the housing does honor to his name and fulfills his last assignment, to be a container of experiences.